Picking winners at Doomben for the Saturday May 28 Doomben 10,000

Racing Online - Tips - Picking winners at Doomben for the Saturday May 28 Doomben 10,000 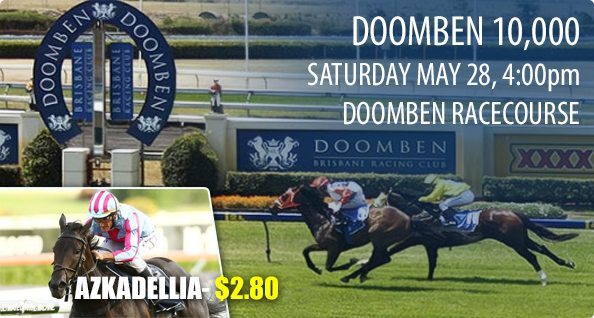 THE Brisbane winter carnival continues for another week and the fine weather conditions have made for a successful carnival already.

The Group 1 Doomben 10,000 is the feature race this Saturday which includes last start Queen Of The Turf winner Azkadellia. The Ciaron Maher-trained mare is the draw card on what promises to be a great day of racing in the sunshine state.

The eight-race card has a stack of big races with the BRC Sires’ Produce and the Grand Prix Stakes to end the day on a high note. Punters have been loving the carnival so far and there’s still many weeks left to go.

Bet on the first four races at Sportsbet and if your runner finishes second or third, you’ll get your money back!

Michael Nolan lines up Upstart Pride which has come in for some support. The four-year-old opened at $8.50 and has firmed into $7.50 on the back of a solid fourth placing behind Sony Legend. It didn’t have much luck in the running after being trapped wide and it gets in well on the weights and with a good barrier. Handy each way chance at odds.

Fine Mist is the current bookmakers’ favourite at $2.40. The Paul Murray-trained mare brings in impressive Sydney form with placings behind Religify and a win over Onemorezeta in the Flying Handicap at Warwick Farm. It loves running on dry tracks and Blake Shinn is riding well at this level. The price is short, but it could drop even further.

Sony Legend must come into calculations after its win last start. The Brian Smith-trained gelding upset a similar field at odds of $21 last start and three of its five career wins have come at this distance and track condition. It drops down in weight to 54kg which makes it a place chance at $2.60.

The John O’Shea-trained Mogador has been expensive for punters this campaign, having paid no more than $7 in three win-less starts to date. The talented three-year-old colt finished off well in behind All Summer Long last start, but it might have its mind on other things. Reports state that it prefers dry tracks so conditions will suit, but punters didn’t want the short price. It opened at $3.10 and currently sits at $3.58.

The big move has come for Barood which will be better off having had the run last start. The Peter and Paul Snowden-trained colt was backed into $4.20 last start and it made good ground late in the race. It won its only start second up which came at Canterbury and the opening quote of $5.50 quickly got smashed into $4.40. Looks a nice winning chance.

Roeinda has also been well backed into $6.50 from its opening quote of $8. The Bjorn Baker-trained filly flew home behind Alucinari last start in the Denise’s Joy at Scone which should be good form for this. It has drawn well in barrier four and the weight of 55kg will help.

Chris Waller lines up Amicus which won the Breeders’ Classic at Randwick only four starts ago. It ran on well in the Emancipation Stakes last start behind Zanbagh and punters have specked it at each way odds. The four-year-old opened at $5 and is currently at $4.60. It has the class edge and could upset the favourite.

Ghisoni opened at $1.85 and has already dropped down to $1.80. The highly-regarded daughter of Lonhro was scratched from the Doomben 10,000 for an easier target and it has found a very winnable race. The three-year-old filly won three straight before running into Peeping and Japonisme in its last two starts. Drawn wide, but it has plenty of talent and the price looks about right.

We can’t remember the last time Press Report won, but it has run two consecutive placings which came in behind Nancy and Danish Twist. That form looks good for this and its only good form has come on dry tracks, but its win percentage is daunting. It opened at $10, drifted to $13 and has come back down to $11. Place chance at $2.90.

Real Love showed its true class last start by winning the JRA Cup on this track. The Darren Weir-trained mare chimed in with 200m to go and pulled away to beat Sir John Hawkwood by just under a length. The eight-time winner looks very well placed against this grade and the 58kg won’t worry it one bit. Good favourites price of $3 available with some bookmakers.

Honey Toast opened short at $4.20 and has subsequently drifted out to $4.60. The Ben Currie-trained gelding won the Toowoomba Cup in fine style by 1.5 lengths and it had no chance last start in the A.D Hollindale Stakes. The son of Redoute’s Choice missed the jump and was quickly sent around the field to make a sustained run. It faded in the straight as expected, but dropping down to 54kg helps and with a better run it looks a chance.

Junoob was the eye-catcher in the JRA Cup when it flashed home for fourth. The eight-year-old is probably past its best, but it’s still competitive at this level and it has form on this track. The Chris Waller-trained gelding also won its only start over this distance and punters have backed it in from $8 to $6.50.

Attention should command it after its second placing in the Champagne Classic last start. The Peter and Paul Snowden-trained colt rebounded nicely after a poor performance in the Sires’ Produce at Randwick behind Yankee Rose and this race is much easier than that. There have been no market movers in this race which puts Attention on the second line of betting at $6.

Souchez is the current $3 favourite which is fair given its third placing in the Champagne Classic. The Lonhro colt flashed home late and with another 50m it would have won the race. It gets another 150m here and it looks like your typical Lonhro colt which takes a few starts to muscle up. Drawn well and it will be tough to beat.

Royal Tithe is a dangerous proposition and it won at silly odds last start. The John Zielke-trained filly had been putting up big wins on the board at Doomben and Sunshine Coast, yet it still paid $19 last start and it did the job well. It has drawn wide so it will likely settle near the tail of the field, so if the pace is strong, the $15 on offer looks like the best value.

Mighty Lucky has been a big drifter in the market after opening as the $4.20 favourite. The Fred Cowell-trained gelding is now paying $4.80, but it didn’t have everything go its way in the Scone Cup last start and its form prior included a second placing behind race-rival Amovatio in the Hawkesbury Cup. It won its two starts prior to that and despite the drift, it still looks a winning chance.

Amovatio opened at $5 and has firmed into sole-favouritism at $4.60. The Chris Waller-trained gelding narrowly missed in the Scone Cup last start and it has a toughness which punters are always attracted to. A win takes it closer to the $1 million mark and another strong showing is on the cards.

Peace Force has been out of form for some time now, but it can strike when least expected. The Gerald Ryan-trained mare isn’t running up to its potential, but it did win its only start at Doomben and it only needs a touch of luck from the wide barrier. $15 looks a decent upset price.

Fell Swoop is a professional winner of nine from 15 starts. The four-year-old trained by Matthew Dale finished only 1.6 lengths behind Malaguerra in the Group 1 BTC Cup last start and its form prior included a placing behind Chautauqua in the Group 1 T.J Smith at Randwick. It will get a perfect run from the inside barrier and it looms as the biggest danger to the favourite at $5.

Azkadellia has been the favourite throughout the Doomben 10,000 betting and it has stayed steady at the $2.80 price. The Ciaron Maher-trained mare won the Queen Of The Turf at its last start, but Maher is aiming it towards the Stradbroke and punters should be weary of that. It will settle back from the wide draw and it might need a strong pace to show its best. Class horse of the field, but the timing might not be right.

Dothraki looked to have the BTC Cup at its mercy late in the race, but lost the bob to Malaguerra. The Peter and Paul Snowden-trained gelding was backed in hard to $5 and that support was justified with the good run. It’s currently at $7 for this and we suggest if there’s a late betting move for Dothraki, make note of it.

Howard Be Thy Name has impressed punters by winning its last four starts, but the drop back in distance might hurt its chance in this. The Redoute’s Choice colt won the South Australian Derby over 2500m which ended up being a slog fest in the straight. It’s a horse for the future, but the $5 looks a touch short for our liking in this situation.

Former New Zealand runner Mackintosh put its rivals to bed in the Rough Habit Plate last start and it will likely adopt the same front-running tactics again in this. Now with Chris Waller, the three-year-old has won two in a row and looms as a potential top liner at the staying distances. It has drawn nicely in barrier three and the bookmakers are keeping it firm at $2.50.

Cylinder Beach was easily beaten by Mackintosh last start, but it did close well. The Desleigh Forster-trained gelding is running above expectations and its win in the Gunsynd Classic over Too Good To Refuse is a good form guide. This will be its seventh start at Doomben and that experience will count for something. $8 on offer and a win wouldn’t surprise.