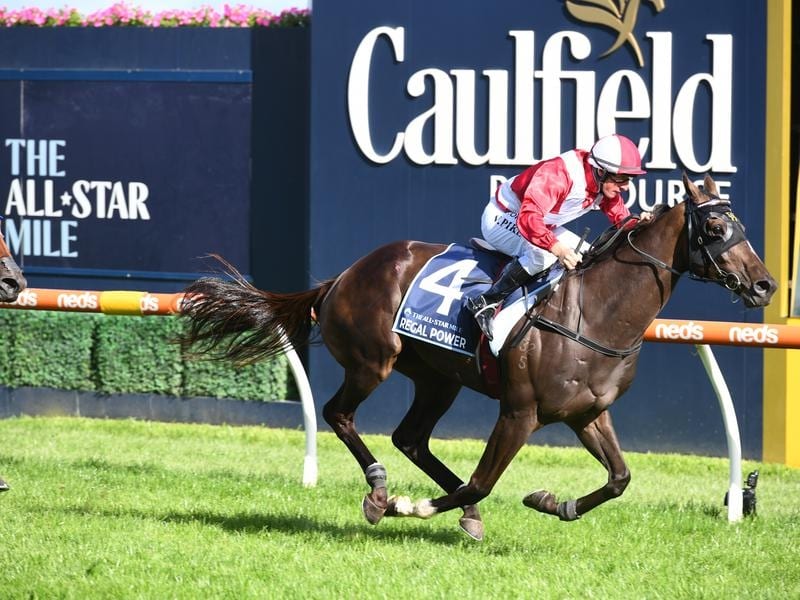 Grant Williams has had his journey from West Australia made complete with a one-two finish in the second running of the All-Star Mile at Caulfield.

A week after the deflating defeat of Regal Power in the Australian Cup at Flemington, Williams, who trains in partnership with his wife Alana, rebounded when the gelding held off stablemate Superstorm to win Saturday’s $5 million race.

Owners of the 15 runners in Saturday’s race, along with racegoers, were locked out of Saturday’s meeting due to the threat of coronavirus while Alana was back in Perth looking after the stable’s runners at Ascot.

Williams said he and Pike hate losing and were dejected after Regal Power finished second to Fifty Stars at Flemington last week.

That was the second successive placing he and Pike had endured in Melbourne after Superstorm was beaten by Alligator Blood in the Australian Guineas at Flemington on February 29.

“That was a race that we set him for, so I’m just rapt for Willie, he’s a gun, that’s he’s won today.

“It kills me when I hear blokes on the radio bagging him as he’s a quality human.”

Regal Power and Superstorm are raced by Bob and Sandra Peters, Perth’s leading owners, and Williams said everyone works as a team.

After a successful Perth summer carnival that included Regal Power winning the Group One Railway Stakes, Williams wanted to showcase the horses’ talents in Melbourne.

Williams said he expects Superstorm to develop into Perth’s leading racehorse next season after heading to Melbourne as a travelling companion for Regal Power.

“He’s a quality animal and will probably be our best horse in 12 months,” Williams said.

Regal Power is nominated for the Queen Elizabeth Stakes at Randwick next month, but Williams doubts he will be travelling.

“I reckon Bob, knowing his horses, will say bring them home and put them away and then we can bring them back later,” Williams said.

One horse Sydney bound is Melody Belle who is on target for The Doncaster Mile during The Championships.

“Opie (Bosson) thought he did the right thing getting on the back of Alligator Blood, but he didn’t take him into the race as he would have liked,” Richards said.

“It was an honest performance and she won’t lose any admirers from that.”

David Vandyke, trainer of the $2.80 favourite Alligator Blood, a fading 10th, was at a loss to explain the performance.

“We know he goes better than that,” Vandyke said.

“When Ryan (Maloney) asked him, he found very little.