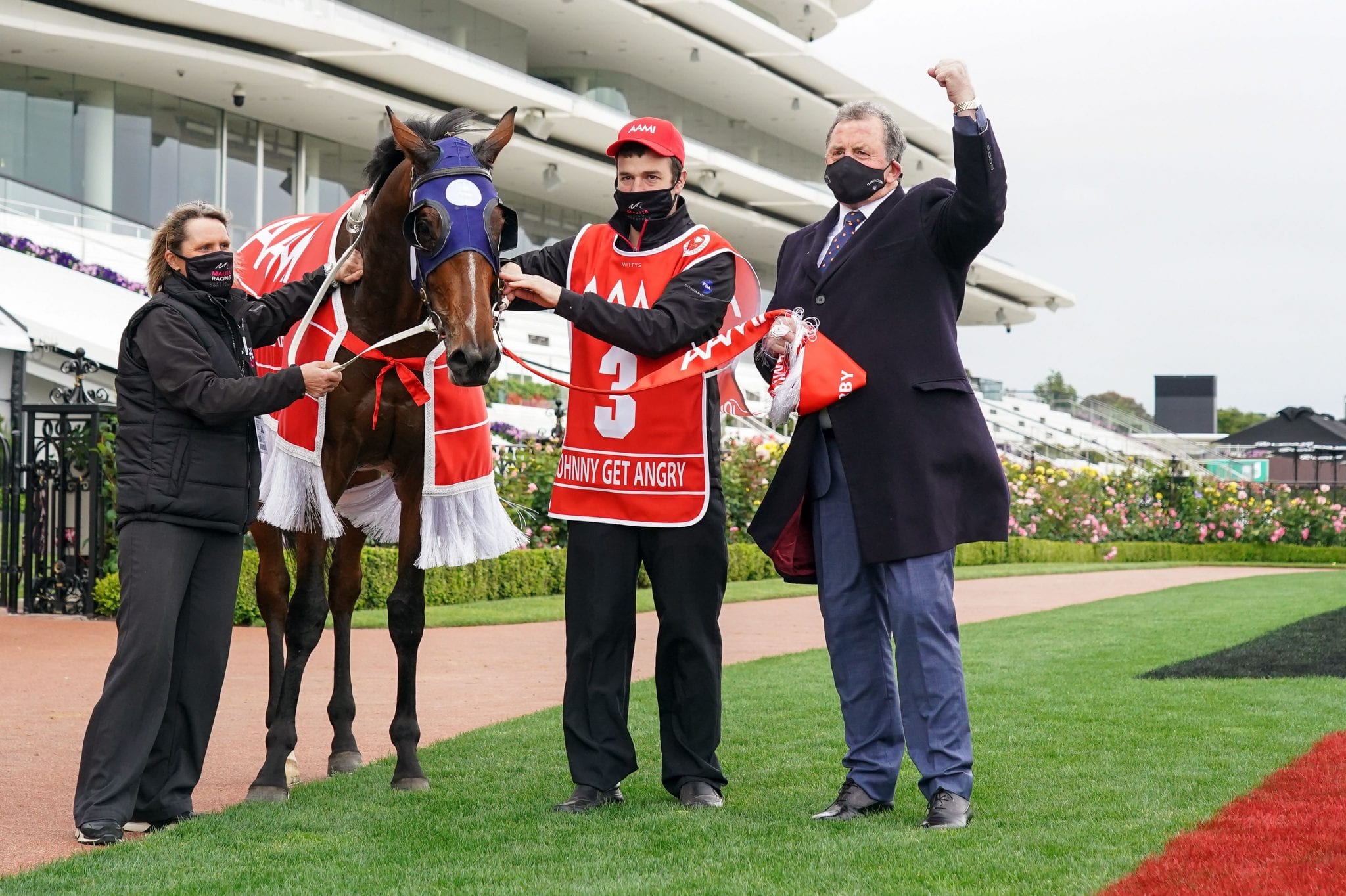 In an amazing result, former AFL coach Denis Pagan has won the Group 1 Victoria Derby (2500m) with New Zealand-bred Johnny Get Angry (NZ) (Tavistock) just four months after saddling up his first runner as a trainer.

The 73-year-old, who coached North Melbourne to win AFL premierships in 1996 and 1999, has had only 12 runners under his owner-trainers’ licence which he took out six months ago. Pagan was in tears, as was 22 year-old apprentice jockey Lachlan King who also rode his first Group 1 winner at what was his only ride for the day.

“I can’t believe it. I didn’t think he could do it. I just wanted to have a runner in it and now he’s won it,” Pagan said. “I’m never emotional. I used to pot Chris Waller for sooking up and now I’m playing him on a break. It just hit me.” King’s father Steven also rode two Victoria Derby winners having scored on Star Of The Realm in 1991 and Helenus in 2002.

Pagan said as a football coach he had always backed young players and that’s why he stuck with King. “Everyone was telling me I should use a senior jockey. I wanted to stick with Lachie, who has stuck with me,” Pagan said. “He’s ridden all of my starters.”

King said Pagan was the best thing that had happened to him in his career, which he had considered giving away this year. The former Xavier College schoolboy said his father, Pagan and trainers Troy and Leon Corstens told him to persevere. The victory was King’s second city winner for the season. “I can’t believe it. It’s so amazing. I thought I had awoken from a dream when he hit the line and had won the race,” King said.

Pagan thanked good friend Troy Corstens for picking the son of Tavistock out as a yearling and buying him for $50,000 at the New Zealand Bloodstock Sales from the draft of Bradbury Park. “I just love the Tavistock horses. I try and get as many as I can out of Zabeel mares or Galileo mares. “Troy is the best in the world. He sourced him for me. He negotiated with the bloke. How he got it for $50,000, I’ll never know how. Maybe I should say that’s Hong Kong dollars in case the missus is listening in. “Troy sources all of my horses and I just reckon he is the best at identifying horses between $40,000 and $150,000 and he has bought me some beauties.”

Pagan trains from Flemington out of the Corstens’ Malua stables. Johnny Get Angry was a maiden going into the Victoria Derby and he became the fourth one to claim the race in the past 30 years. Johnny Get Angry defeated Hit The Shot (Dundeel) by a length with Young Werther (NZ) (Tavistock), the $3.40 favourite, a short neck away third.

Out of the Zabeel mare Luminova, Johnny Get Angry was bred by Greg Perry’s Greenwich Stud. Raised at Michelle Norman and Dave Keenan’s Kilmore Farm in Matamata, the son of Tavistock was prepared for sale by Casey and Michelle Dando of Bradbury Park and was purchased under Corstens’ Flemington Bloodstock banner.

Casey Dando, who was a flat-mate of Troy Corstens in the mid 90s recalled Johnny Get Angry as a raw staying type. “It didn’t matter what sort of feed I threw at him he just didn’t fill up. He went to the sales still looking a big, lean tank. One thing I will give him, he was an athletic horse,” Dando said.

“It’s a massive thrill. We had five farm graduates in Derbys last year and couldn’t get a placing. “To actually get one up, especially the VRC Derby at Headquarters (Flemington), is a huge thrill. “It’s off the back of raising the New Zealand Filly of The Year (Jennifer Eccles) and South Island Three-Year-Old Filly of The Year (Miss Federer) last year. It has been a big 18 months for us.”

Earlier in the day a pair of promising Bradbury Park graduates in three-year-olds Grip and Il Affare both won impressively at Pukekohe. “With the likes of Grip, Ill Affare, Tokorangi and Johnny Get Angry, it’s not going to stop in a hurry,” Dando said.

Johnny Get Angry becomes the sixth Group 1 winner for Cambridge Stud’s late sire Tavistock and the fourth bred on the Tavistock – Zabeel cross, following Werther, Tarzino and Toffee Tongue. A half-brother to Johnny Get Angry by exciting first crop sire Almanzor, a European Champion Three-year-old, will be offered in Book 1 at Karaka 2021 through the Cambridge Stud draft.

There are eight two-year-olds by Tavistock catalogued in the forthcoming New Zealand Bloodstock Ready To Run Sale, which takes place at Karaka on November 18 and 19.