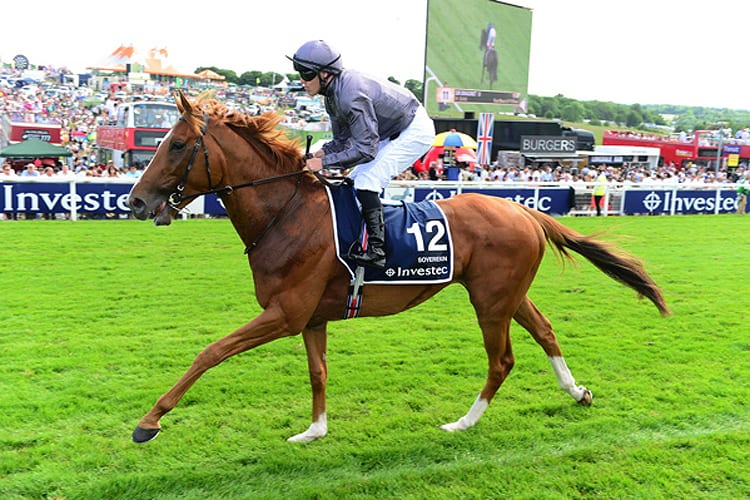 Aidan O’Brien is the most successful trainer in the history of Flat racing in Ireland. He has runners in three of the four Group 1 races on the second day of Irish Champions Weekend at the Curragh on Sunday.

The treble on his best chances in these races pays over +15000. For this bet to land the O’Brien’s entries will have to beat horses trained by his son, Joseph O’Brien. The powerful Irish dynasty could share most of the spoils and win all but one of the Group 1 races at the fixture.

O’Brien’s main owners are the Coolmore syndicate who target the major races in the UK and Ireland. He has now won 44 Irish Classics, including the St Leger five times. This year’s race is the fourth Group 1 on Sunday (4.40). Sovereign for O’Brien can be backed at +300 with BetOnline.

The horse won the Irish Derby last season and is eligible because the Irish St Leger is now open to older horses. Three-year-olds get nine pounds and there is also a three pound allowance for fillies. Sovereign is a colt aged four so carries the maximum weight which should be manageable. The O’Brien trained Passion receives both allowances.

The biggest threat to Sovereign could be Search For A Song. The Dermot Weld trained horse won the race last season so is proven over the course and distance. Five horses have won back-to-back St Leger’s since it became an open age race in 1983 but Sovereign is preferred this time.

Battleground is the ante post favourite for the 2021 2,000 Guineas at +800 with BetOnline. This O’Brien horse could shorten in the betting for that race if he wins the National Stakes (16.10) on Sunday. The Royal Ascot and Glorious Goodwood wins make the horse one of the best juveniles and the favourite for the Group 1 race.

Joseph is represented by Thunder Moon who is a few pounds behind Battleground on official ratings. Lucky Vega has the better form, trained by Jessica Harrington, the horse is the leading two-year-old in Ireland and should have the measure of Battleground. Mac Swiney, from the Jim Bolger stable, could be placed at a decent price.

Pretty Gorgeous has the best form of the runners declared for the Moyglare Stud Stakes (15.40). The horse is under the care of Jospeh O’Brien and the second best horse in the race on juvenile form is Shale, trained by his brother Donnacha.

Aidan may see one of his sons enjoy a big race win because his three runners are somewhat behind Pretty Gorgeous and Shale on form. Two-year-olds can show considerable improvement but in this case Aidan does not have the quality to win the race which should go to Pretty Gorgeous. Teresa Mendoza looks a good enough prospect to make the frame.

The older O’Brien has not entered a horse in the Derrinstown Stud Flying Five Stakes (15.10). However, the family is represented by Joseph’s Alligator Alley but that horse is well off the pace in terms of ratings. Glass Slippers, trained by Kevin Ryan in the UK, has the form to break the O’Brien monopoly but they have live chances in the other three Group 1 races.

The O’Brien family have the patronage of hugely wealthy owners who always dine at the top table. Their spending power produces Group 1 horses and the team could win three of the top level races at the Curragh on Sunday.