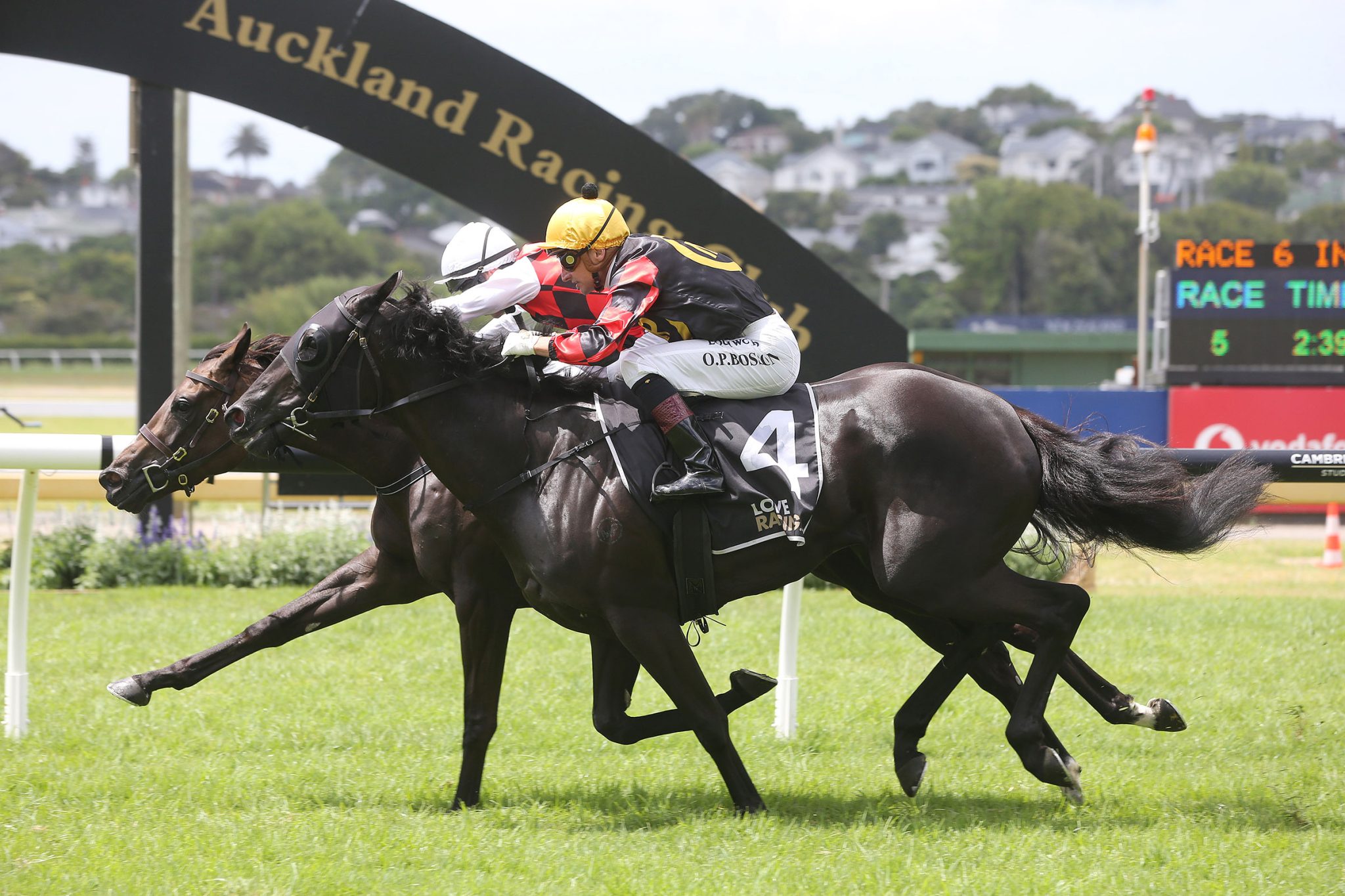 La Crique has looked like a speed machine for most of her career but trainers Katrina and Simon Alexander think she could stay an Oaks trip.

The Vadamos filly won for the third time on Sunday, fighting back after being headed to beat Group 1 New Zealand 1000 Guineas (1600m) winner The Perfect Pink over 1500m at Ellerslie.

It was also the first time she’d won a race without leading, having settled fourth in the 10-horse field.

“She’s been very sharp and there was probably a thought she wouldn’t stay, so it was lovely to see her be able to settle in behind the speed,” Katrina Alexander said.

“The longer distances might be better for her as a four-year-old but we will see what’s best for her.”

Much of Alexander’s confidence about La Crique’s staying potential comes from having trained her mother Destiny Cove, who won up to 2400m in the Trentham mud. In addition, her sire Vadamos was a Group One-quality horse up to 2000m and won up to 2400m as a three-year-old.

Alexander said La Crique’s next race, the Group 3 Desert Gold Stakes (1600m) at Trentham on January 29, would play a key part in deciding where La Crique heads next.

La Crique, who is owned by her breeder John Cassin, is nominated for the Group 1 Al Basti Equiworld Dubai New Zealand Oaks (2400m), Group 1 Vodafone New Zealand Derby (2400m), and the Group 1 Wellington Seamarket Levin Classic (1600m), but it’s possible she may head across the Tasman if she runs well in the Desert Gold Stakes.

“If she were to go exceptionally well, then for John’s benefit she could go to Australia,” Alexander said.

“Whether she would go to Sydney or Brisbane would probably depend on the timing. She had a couple of weeks off between her last two races and she really thrived, so she might benefit from more time after Trentham.

“She also hasn’t really travelled far before so Trentham will tick that box. We’ll learn a lot more about her after that race.”

Alexander’s other top three-year-old Te Toki could also have staying targets in mind, though his next test will be the Karaka Million 3YO Classic (1600m) at Ellerslie on January 22.

Te Toki won his first two starts before Gerard Petersen and Rod Duke bought shares in him. Since then he finished third over 1400m at Te Rapa on December 18 and then fourth in the Group 2 Auckland Guineas (1600m) on New Year’s Day.

Alexander said Te Toki’s effort in the Auckland Guineas in the hands of Craig Grylls was better than it looked.

“We wanted to see if he could settle but he almost did it too well – he went to sleep back in the field but the pace was slow and he had no chance because of that,” she said.

“It opened a few more doors in terms of his tractability. We know he can settle now if needed, but he’s also got enough speed to go forward if we need to in the Karaka Million.”

Alexander said Te Toki will head to Australia some time after the Karaka Million, but there is a chance he could stay with her for the New Zealand Derby at Ellerslie on March 5, and he could use the Group 1 Herbie Dyke Stakes (2000m) at Te Rapa on February 12 as a lead-up.

“If it’s in the best interests of the horse to go to Australia earlier and not stay for the New Zealand Derby then that’s what will happen, but if all is going well then we would like him to contest the Derby.”

The Alexanders have had a great season to date, winning nine races with an outstanding strike rate of 3.67. Two of those have come via their four-year-old mare Stopalltheclocks, who followed up a 2000m maiden victory at Matamata on December 23 with another victory in a Rating 74 event over 2200m at Rotorua on January 6.

“She’s a true blue Kiwi stayer and she makes it a genuine staying test when she’s out there,” Alexander said.

“She’s a big mare and she’s really only just strengthening up now. We’ve had to be very patient with her to let her mature enough to get to this spot and it’s been great to see her put those two wins together.”

Stopalltheclocks is likely to race next in a Rating 74 contest over 2400m at Trentham on January 22, and her effort there will determine where she heads after that.

“She may sneak into the Avondale Cup (over 2400m at Ellerslie on February 19) if she were to go well at Trentham, but she’ll have to continue to thrive.

“There’s also races like the St Leger potentially, but we don’t want to over-tax her. We should see her as a genuine cups horse next season.”