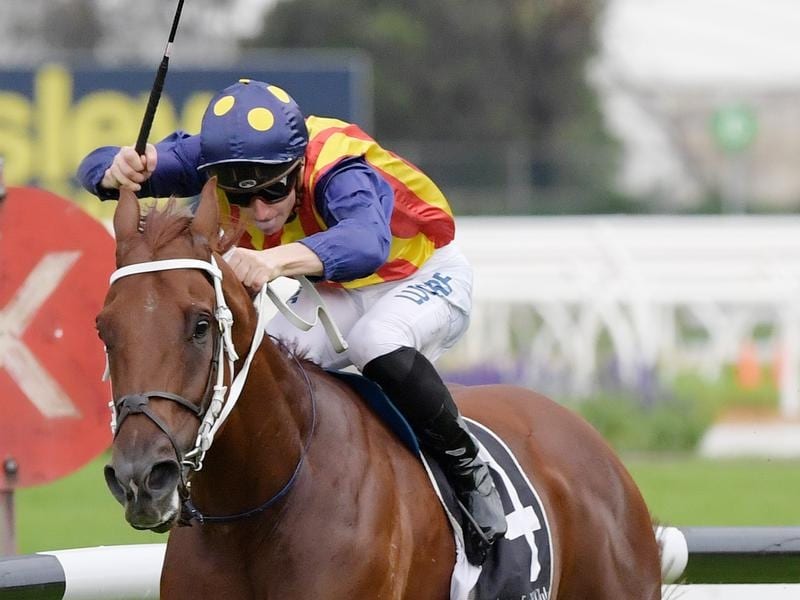 What a mammoth task Nature Strip’s competitors will face in The Everest if he can maintain his winning mentality.

They were the thoughts of Chris Waller’s strapper Clare Heuston after the seven-year-old’s dominant 4.5-length victory in the King’s Stand Stakes at Royal Ascot last week.

Waller now has his sights set on the champion gelding defending his AU$15 million Everest title on October 15.

And the pressure that comes with winning consecutive titles in the world’s richest race on turf should not bother the superstar set to be ranked the best sprinter on the planet.

That is because of how well he handled the massive occasion before destroying his world-class opponents over 1006m.

“(Trackwork rider Stuart Williams) has ridden him from the beginning, and he said to me ‘Clare, this horse has never felt better than it does now’,” Heuston told HorseBetting.com.au.

“He said ‘he won’t get beaten’. Stuart was supremely confident.”

It was almost all over early because of the way Nature Strip started.

“He can miss the kick. But this time he jumped, and he’s been up the straight and won at Flemington a couple of times,” Heuston said.

“But it was just an afternoon stroll for him. He jumped and just waited, and even James (McDonald) was looking around at the horse saying ‘are you coming?’

Nature Strip – also a TJ Smith Stakes (three times), Darley Sprint Classic (twice), Black Caviar Lightning, Galaxy and Moir Stakes winner, all at Group 1 level – will again relish the work Williams will do with him before The Everest.

“He’s coming back for the Everest campaign – Stuart will travel back with him,” Heuston said.

“He will have to go into quarantine. But I’d imagine he’ll only have a week off – if that.

“October isn’t that far away, so Chris has been ticking him over and had him cherry-ripe for this (King’s Stand Stakes) assignment.”

Meanwhile, Heuston said she was disappointed her work with Home Affairs had ended after his 20th-place finish in the Platinum Jubilee Stakes at Royal Ascot.

But she supports Coolmore’s decision for its crack colt and three-year-old to join its star-studded stallion roster at its Hunter Valley property, where he will stand at a fee of $110,000.

He beat superstar stablemate Nature Strip on the line in this year’s Black Caviar Lightning on February 19.

“It’s a shame they retire them so early, but they don’t want them to increase their value. It’s the same with The Autumn Sun – he could’ve been anything as a four-year-old,” Heuston said.

“But they (Arrowfield Stud) wanted to stand him. We’ve had the first crop of his babies come through and they’re lovely types.”

Heuston – last year’s Sydney strapper of the year – is well respected because of her attention to detail in cleaning, ironing and sorting colours for Waller’s stable of more than 1,000 runners.

Every win means a lot to her, including the five who saluted on the 10-race card at Rosehill on Saturday.

They were Naval Seal, Born A King, Skyman, Wicklow and Bella Rouge.

“Any win is a good win, even at (regional venues). It’s just the excitement of winning, and seeing the strappers and owners happy,” Heuston said.