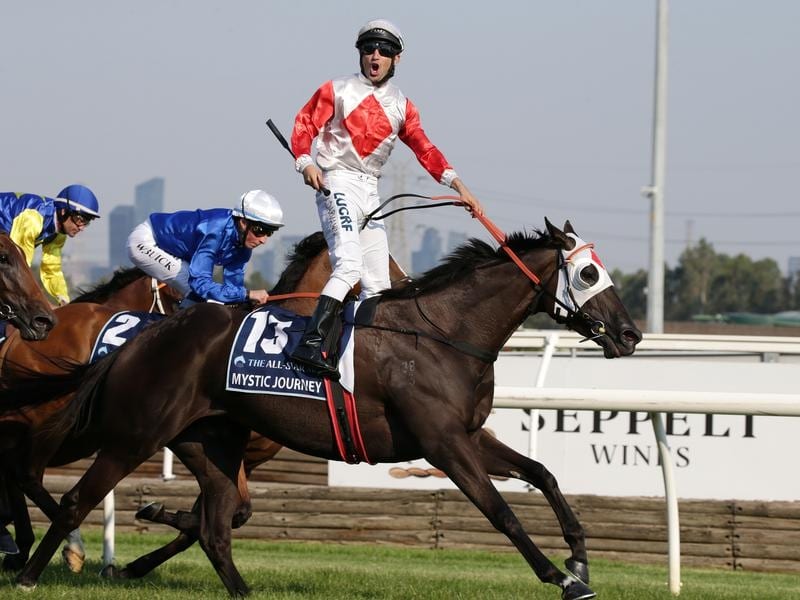 After delaying Cox Plate favourite Mystic Journey’s return to racing, trainer Adam Trinder will trial the Group One winner again at Devonport before her rescheduled first-up assignment in the P B Lawrence Stakes.

Trinder had pencilled in last Saturday’s Bletchingly Stakes (1200m) at Caulfield for the Australian Guineas and All-Star Mile winner’s return but aborted those plans when rain in Melbourne meant the track would be rain-affected.

The Bletchingly, run on a soft (6), was won by Scales Of Justice.

Tasmanian-based Trinder said he was content with the decision and planned to trial Mystic Journey next Tuesday on Devonport’s synthetic track over 800m before she resumes in the Group Two P B Lawrence (1400m) at Caulfield on August 17.

“Looking at the races there on Saturday I thought the track raced really well for the rainfall that they received, and so close to the race, but I just thought it would have been a little bit testing for her in her first start of the preparation,” Trinder said.

“She’s in really good order, which is the most important thing, so she will trial on Tuesday and then run in the P B Lawrence.

“I trust the ground will be more suitable for her and I’m really looking forward to getting her back to the races.”

After the Lawrence, Trinder will take Mystic Journey home again and assess whether she needs to return to Melbourne to run in the Memsie Stakes at Caulfield two weeks later or whether she goes straight to the Group One Makybe Diva Stakes (1600m) at Flemington with four weeks between runs.