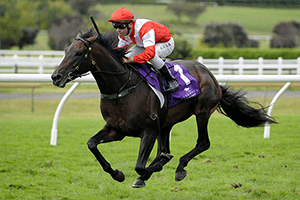 The New Zealand and Australian Derby winner looks a natural Melbourne Cup-type horse and trainer Murray Baker wants to get the miles into it early this preparation.

“If he’s going to run in the Melbourne Cup he needs to get under way pretty quickly,” Baker said.

“The Cup comes around a lot quicker than you think each year and you can’t win it if you’re not ready.”

The son of Holy Roman Emperor hasn’t raced since April 6, but looks in great condition according to Baker.

“I’ve been out to see him and I’m very satisfied.

“He’s a great stayer and he’s got tactical speed, just the type for a Melbourne Cup.”

Mongolian Khan is currently on the third line of betting for the Melbourne Cup. The three-year-old is paying $21 at Sportsbet.com.au behind current favourite Fame Game ($15) and Signoff at $17.

It has already secured a spot in field by winning two derbies and it will give Baker his fifth Melbourne Cup starter. Baker lined up Prized Gem in 2002 where it finished a disappointing 14th.

Australian Derby winner Nom Du Jeu finished eighth in 2008 and Harris Tweed was able to run fifth in both 2009 and 2010 Melbourne Cups.

His best finish was way back in 1990 where he trained The Phantom to run second behind the Bart Cummings-trained Kingston Rule.

Najoom to line up in 2015 Stradbroke Handicap

Promising sprinter Najoom will take its place in the Group 1 Stradbroke Handicap next week after connections paid the late nomination fee this week.

The Gai Waterhouse-trained Najoom blitzed rivals when winning the Group 3 Fred Best Classic last Saturday, but came out of the race with a minor injury.

By winning the Fred Best, Najoom gained a ballot exemption for the Stradbroke, but its injury was a cause for concern.

Those concerns were eased when Emirates Park paid the $30,000 late entry fee after general manager Trevor Lobb initially indicated that its next run would come in the Group 1 Tatts Tiara on June 20.

It will carry only 50.5kg, which makes it tough to beat and bookmakers currently have it as the $4.50 favourite, despite rising significantly in class.

Lumosty is on the second line of betting at $6.50, but has not yet secured a run in the Brisbane Winter carnival feature.

There has been plenty of money invested on La Amistad for very little return, but the half-sister to three-time Melbourne Cup winner Makybe Diva will be given another chance.

La Amistad was able to defeat Queensland Derby winner Sonntag and perennial placegetter Zabeelionaire. It will now be given another chance at running in the Melbourne Cup this spring.

“It’s a long way from now until the Melbourne Cup but at least we’ve got some sort of chance,” Wayne Hawkes said.

“She’s probably in the Niwot and Maluckyday mould which would have been good enough to win a Melbourne Cup 20 years ago, but it’s a bit different now.”

The win shortened the odds for the daughter of Redoute’s Choice, which currently sits at $34 with Sportsbet.com.au.

After winning the McKell Cup in Sydney last season, La Amistad was the second favourite in the 2014 Melbourne Cup, but its form tapered off and it failed to make the field.

“She wasn’t good enough last year but she’s started to do it on her own accord now and that’s great,” Hawkes said.

EVERYONE witnessed just how good Winx is when it won impressively last start in the Group 3 Sunshine Coast Guineas, and it now heads the market for the Group 1 Queensland Oaks this Saturday.

The Chris Waller-trained daughter of Street Cry is the short $2.50 favourite at WilliamHill.com.au after it scorched home from 17th at the 400 metre mark to win by two lengths last time out.

Winx has always had Group 1 potential and its second placing in the Group 1 Australian Oaks at Randwick behind Gust Of Wind was another good indicator.

“She is ready,” Waller said. “She’s had a great grounding for the Oaks and I couldn’t be more confident.”

One of the main form lines for the Oaks was last weeks Group 2 The Roses at Doomben, which was taken out by the Gai Waterhouse-trained Bohemian Lily.

The former New Zealand-trained runner has been in great form since arriving in Australia and looms as the main danger to Winx.

It was defeated by another Waller-trained runner in Ballet Suite two starts back, but the extra run might be enough to turn the tables.

“The plan has been the Oaks all the way along and she has just kept on improving up here,” Waterhouse said.

“She is a frontrunning stayer and they can be hard to beat.”

Bohemian Lily is currently on the second line of betting at $4.50.