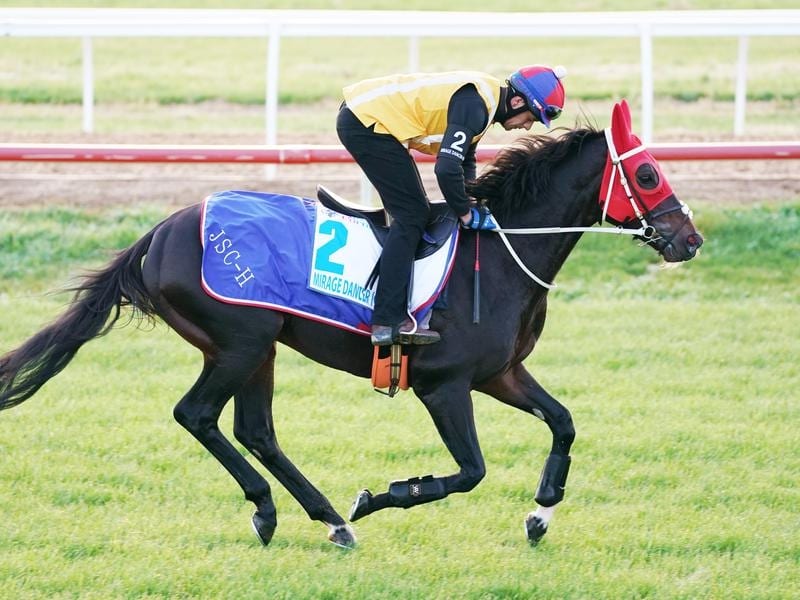 Even when she is not at the stable, Natalie Young is keeping a watchful eye on Melbourne Cup contender Mirage Dancer.

During the Melbourne Cup parade in the heart of the city, Young was able to tap into stable security 50km at Cranbourne to make sure everything was OK with Mirage Dancer.

Mirage Dancer is Young and partner Trent Busuttin’s first Cup runner and the butterflies are building as the race approaches.

While being away from home may cause some anxiety, an app on Young’s phone keeps her in touch with the stable.

“I had a look at him during the parade and he had his head in his feed bin,” Young said.

“So there’s no need to worry.”

Young says everything has gone like clockwork including the stayer’s Australian debut third placing behind Mer De Glace in the Caulfield Cup (2400m) on October 19.

“The way he ran through the line in the Caulfield Cup after getting that squeeze at the top of the straight I think he’s going to be better for it,” Young said.

“He’s had that experience racing here now and in a big field.”

Young said Mirage Dancer was looking great in the coat and had his final gallop on Saturday morning.

“He did a nice bit of work on the grass,” she said.

“He pulled up super in the wind and I think we’ll be presenting him in great order.”

Young gave children Ben and Zara the day off school on Monday to soak up the atmosphere of the Cup parade.

“It’s about these little things and hopefully they’ll look back at it and it’s something they can treasure later in life,” Young said.

“They’re part of us but they miss out on a lot because we’re in this game, but when you have a runner in the Melbourne Cup, you have to include them.”