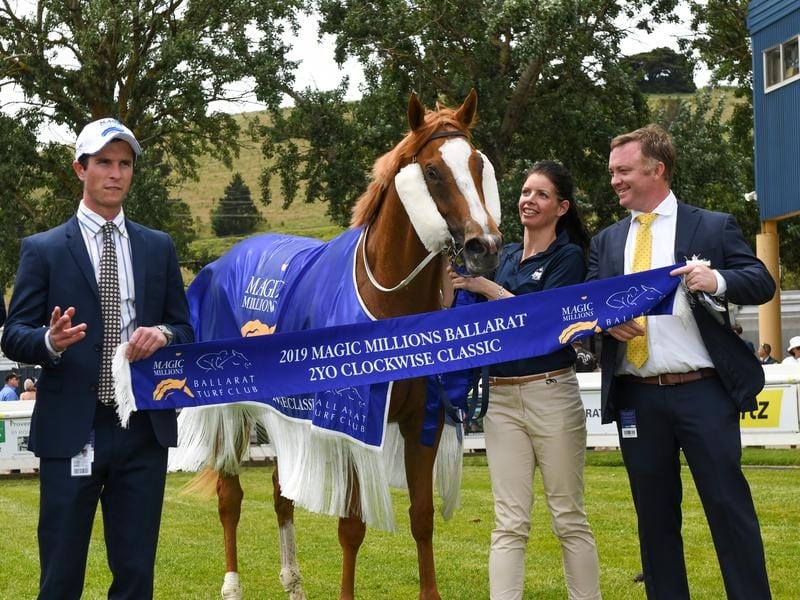 A good barrier should help Melbourne filly Euphoric Summer find the necessary few lengths needed for her to win the Magic Millions 2YO Classic, according to co-trainer Michael Kent jr.

Euphoric Summer was the top qualifier for Saturday’s $2 million 2YO Classic but has been the forgotten horse in pre-race discussions in recent weeks.

The filly won the Ballarat Magic Millions race, which is run clockwise to give Victorian horses experience racing in the right-handed direction, beating Classic rival Rathlin in an impressive performance.

Kent, who is in partnership with Multiple Group One winner Mick Price, brought Euphoric Summer to Queensland three weeks ago to let her acclimatise.

The filly was third behind King’s Legacy and Every Rose in the Group Three B J McLachlan Stakes (1200m) at Eagle Farm last Saturday week.

Kent said Euphoric Summer was too far in the McLachlan which had told at the finish.

“That is why it was so important she drew a nice barrier in the Millions race,” he said.

“It means from there (6) she should be fourth or fifth behind the pace. She probably needs to find a few lengths to win but the barrier can help her do that.

“For all that there was a bit left in the tank at Eagle Farm and we have got her at her top for Saturday.”

Another plus was Euphoric Summer had been qualified for the Millions since winning at Ballarat on November 23 which meant her campaign was not rushed.

Kent said he had been pleased the way Euphoric Dancer worked with Millions rival Gotta Kiss on Tuesday.

“They worked on the Eagle Farm course proper and she did it well,” Kent added.

Champion jockey Damien Oliver will be chasing one of the few major races to elude him in Australia on Euphoric Summer.

Oliver has had limited opportunities in the Classic with his best efforts a second on Gold Ace (1995) and third on Single Gaze Gaze (2015).

Oliver has ridden the filly in all three of her starts and made an early commitment to Euphoric Summer in the Millions.

The filly is raced by the international Phoenix Ladies Syndicate meaning she is eligible for a share of the $500,000 bonus on offer to women-only owners.

Euphoric Summer, who is by Not A Single Doubt out of 2012 Stradbroke Handicap winner Mid Summer Music, was knocked down for $260,000 at last year’s sales.

She has a half-sister by Fastnet Rock Listed for sale on Friday.

Kent jr, the son of top Victorian trainer Michael Kent, has been to Queensland previously but is at his first Magic Millions carnival.

Kent has been in partnership with Price, the winner of 37 Group One races, since March and they have had 47 winners this season.

“It has been a great experience so far and naturally would be even better if we win it,” he said.