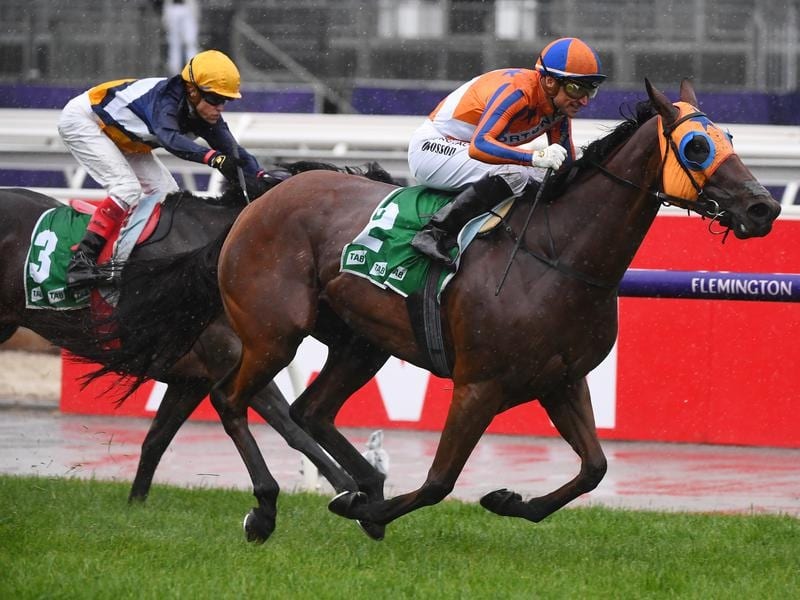 New Zealand’s star mare Melody Belle has added a Group One win in Australia with a dominant performance in the Empire Rose Stakes at a rain-soaked Flemington.

Already a winner of nine Group One races in New Zealand including six this year, Melody Belle was racing in Australia for the first time since March last year in Saturday’s fillies and mares’ 1600m weight-for-age feature.

And she showed her class.

With Opie Bosson aboard, Melody Belle sat wide with cover back in the field from a deep draw before asserting her authority in the straight.

“The opposition she’s been beating in New Zealand might have been a little bit questionable but she can only beat what’s in front of her and she’s been doing it really well.

“We were quietly confident she was ready to go.

“She enjoys these conditions.

“The rain was just going to slow some of the others down more than it was going to her.

“That was great. Awesome.”

Melody Belle’s Empire Rose success comes on the back of a string of Group One placings for the stable in Australia this spring.

Te Akau Shark was a close second in the Epsom Handicap in Sydney and third in last Saturday’s Cox Plate in Melbourne, while three-year-old filly Probabeel was runner-up in the Flight Stakes in Sydney.

“She’s a fabulous horse and she’s been so good for my career,” Richards said.

“We’re proud Kiwis and we’re glad to be over here representing the country.

“Gingernuts winning the Rosehill Guineas was pretty special but to come to Melbourne in the spring and be competitive after a frustrating run of placings in Group Ones, it’s really good to get the monkey off the back.”

The win was five-year-old Melody Belle’s 15th from 25 starts and her second victory in Australia, the other being the 2017 Group Two BRC Sires’ Produce Stakes in Brisbane.

Richards said Melody Belle could back up in either the Group One Mackinnon Stakes or Group Two Matriarch Stakes next Saturday.

Bosson said he was even more confident when the rain came and rates Melody Belle right up there among the best horses he has ridden.

“To do it on both sides of the Tasman and win ten Group Ones, not many can do that,” Bosson said.