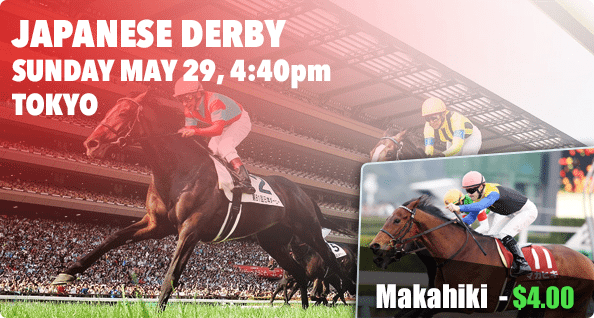 AS we predicted when we previewed the Group 1 Japanese Derby, the top three favourites battled it out on Sunday in the second leg of the Japanese Triple Crown.

Makahiki turned the tables on Dee Majesty, which beat it home last start, but the biggest challenge came from Santono Diamond, which only narrowly got pipped on the post.

The win for Makahiki was trainer Yasuo Tomomichi’s and also jockey Yuga Kawada’s first Derby win and Kawada was pleased with the win, despite having to wait a few minutes for the result to be posted.

“The most important thing is I managed to make a Derby winner out of him,” Kawada said.

“I thought I’d won it when we crossed the finish, but I was a little worried because it took a while for the photos to come out. When the number ‘3’ appeared on the board, I was overcome with a lot of emotion.

“It’s a privilege just to be riding one of the 18 horses in this race, but to win it is an absolute honour.”

Makahiki is guaranteed to contest the final leg of the Triple Crown and might take a shot at the Prix de l’Arc de Triomphe on October 3.

“That’s something for the owner and trainer to decide,” Kawada said.

“I just want him to stay healthy. We have a lot to look forward to, and it’s exciting.

“In the Satsuki Sho, he didn’t get off to a very good start and had to settle for being runner-up and I wanted to do something about it.

“This time, we traveled in a nice position and found Santono Diamond right in front of us. I knew then he was going to be the one to beat.”

Santono Diamond made a late burst on the outside of Makahiki, but the post came up too quickly. Jockey aboard Santono Diamond, Christophe Lemaire, knew he had lost the race and shook Kawada’s hand straight after crossing the line.

“We may have lost by a nose, but these two horses are a cut above the rest,” Lemaire said.

“Santono Diamond will get stronger.”

The first three horses home were all sired by Triple Crown winner Deep Impact. Makahiki is yet to be added to the Arc betting market where fellow Japanese star A Shin Hikari is the current $8 favourite at Bet365.com.au.

Mackintosh in doubt for Queensland Derby

The current 2016 Queensland Derby favourite is in doubt as trainer Chris Waller might target the former Kiwi runner towards the Queensland Guineas instead.

The Guineas and Derby are both raced on June 11 with the Derby at group 1 level and the Guineas being a group 2. Waller stated the decision will come down to the three-year-olds stamina following its win on Saturday at Doomben.

“With Mackintosh and the Queensland Guineas being on the same day worth $400,000 I have discussed with the owners that this option is available to us, but are yet to make a final decision as where we will run,” Waller said.

“Originally the Derby was the main goal but if we felt his stamina was lacking over the 2400m distance then the Queensland Guineas would be a suitable option albeit worth $200,000 less in prizemoney.”

Mackintosh is the $3.60 Derby favourite having won its last three starts in Australia and Waller will also likely line up Encosta Line and Saturday winner Rodrico.

“After he [Rodrico] got beaten last time, the Derby was in question but I’d say it’s back now,” Waller’s racing manager Charlie Duckworth said.

“It was a very strong win.”

Encosta Line missed the Grand Prix Stakes on Saturday with an elevated temperature and will be given time to get healthy.

“He’s fine now but Chris didn’t want to travel him on the day the temperature spiked,” Duckworth said.

“He has time to recover.”

Charmed Harmony is on trial for the Group 1 Stradbroke Handicap on June 11 after finishing last in the BRC Sprint on May 21.

The John Salder-trained mare is targeting the $1.5 million feature of the Brisbane winter carnival and Sadler is hoping for a turnaround in form.

“We’ll give him a solid hit-out on Thursday and that will determine whether he runs in the Stradbroke,” Sadler said.

Better suited to running left handed, the 13-time winner didn’t handle going the other way and Thursdays trial will tell Sadler all he needs to know.

“He lugged out the whole way the other day at Doomben and his two worst runs have been when he’s gone the reverse way,” Sadler said. “Maybe he just doesn’t handle racing that way, so we’ll see what happens in the trial.

“If he doesn’t run in the Stradbroke he can have two or three weeks off in the warmer weather in Queensland and then come back down for the spring.”

Charmed Harmony is currently an outside chance at $51 with Sportsbet. The favourite is currently Azkadellia at $4.60 followed by Black Heart Bart at $6.