Mahuta backed to make a winning return at Bletchingly Stakes 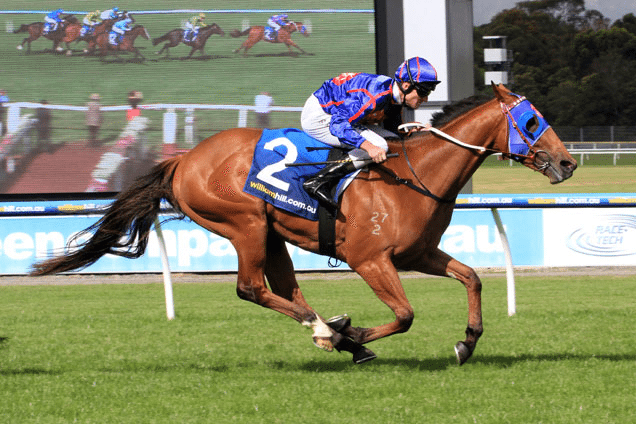 THE Darrien Wier trained three-year-old Mahuta is the favourite for Saturday’s Group 3 Bletchingly Stakes at Caulfield after crownbet.com.au moved the colt in to $3.80.

Mahuta resumes as favourite after a 20-week spell for the last group race of the 2015/16 racing season.

Prior to the layoff the three-year-old had won six straight races, including the Carbine Club Stakes, Sandown Guineas, Magic Millions 3YO Guineas and Autumn Stakes.

Both Mahuta and five-year-old gelding Fast ‘N’ Rocking opened at the $5 quote, but both runners have gone in opposite directions in the market for the $150,000 sprint.

The David Hayes and Tom Dabernig-trained Fast ‘N’ Rocking is on the second line of betting at $6.

Trainer Darren Wier said the team has one eye on a spring campaign.

“He’ll run Saturday and then the PB Lawrence Stakes before the Memsie Stakes,” Weir said.

“The goal is to have him wound up for the Group 1 – he needs to have a couple of runs because he’s a big, heavy horse now.

“The Memsie is the one, and then we’ll pick and choose from there and see where he fits in.”

“He’s come back well, he trialled at Burrumbeet on Monday and looked good.”

While there will be plenty of love around for Mahuta, racing fans will be buoyed by the potential return of ‘The People’s Horse’ – The Cleaner.

New trainer Peter Gelagotis had originally eyed-off a resumption in the PB Lawrence over 1400m at the same venue a fortnight later for the star sprinter, but after the geldings spectacular trail win the team is toying with the prospect of an earlier than expected return.

Trainer Peter Gelagotis said that while The Cleaner will be an acceptor, the champion Taswegian is no certainty to run on Saturday.

“We spoke to the owners and we want to have a look at this race and decide whether to run him later in the week,” Gelagotis said.

“If we’re happy and it profiles right for him, he’ll probably run.”

Steven Arnold will take ride on the The Cleaner if he runs in the Bletchingly Stakes and is currently at the $15 quote to take out the Group 3.