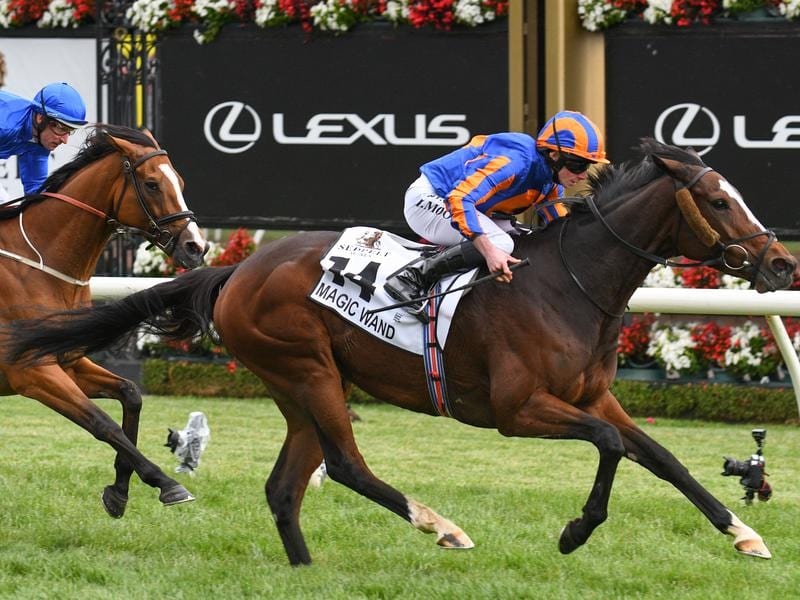 Globetrotting Magic Wand, the Irish-trained mare who left her mark on the 2019 Melbourne spring carnival, has made a triumphant return to racing on home soil.

Taking on three rivals at her first start in Ireland since spending the past nine months competing around the world, Magic Wand won the Lanwades Stud Stakes at the Curragh.

The winner of the Group One Mackinnon Stakes at Flemington in November, Magic Wand was part of a four-timer for trainer Aidan O’Brien and jockey Seamie Heffernan at the Irish 1,000 Guineas meeting.

She was sent off the 4-5 favourite and made short work of her opposition in the Group Two race over 1600m, winning by 4-1/2 lengths.

“She’s a lovely mare. We had her in at Ascot but we were afraid of the ground getting soft and didn’t want to wait,” O’Brien said.

“She hadn’t run over a mile since her debut. She has a lot of class, she’s a great mare and I’m delighted with her.”

Magic Wand contested three of the Australian spring’s biggest races, finishing fourth in the Cox Plate before running 10th in the Melbourne Cup.

She ended her campaign with victory over New Zealand mare Melody Belle in the Mackinnon Stakes over 2000m on the last of four days of the Melbourne Cup carnival.

But the southern hemisphere spring was only the start of Magic Wand’s travels.

A narrow defeat in the Hong Kong Cup in December was followed by another placing at Group One level in the Pegasus World Cup Turf at Gulfstream Park in Florida.

Her tour of duty finished in the world’s richest thoroughbred race when down the course in February’s $US20 million ($A29 million) Saudi Cup in Riyadh.

Magic Wand has also raced in Dubai, France and the UK during her career.