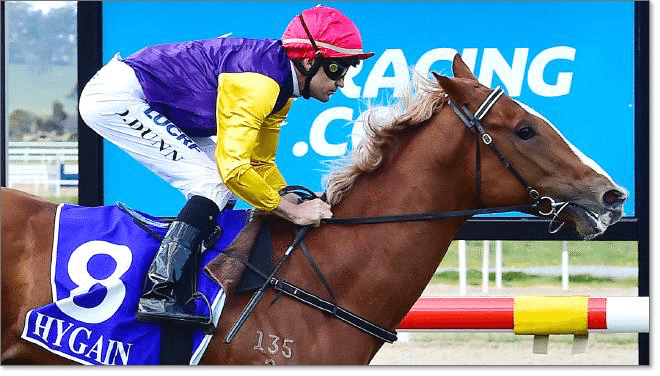 AFTER winning a 990-metre trial at Cranbourne, master trainer Pat Hyland believes Lizard Island is right on track for the 2016 Australian Guineas in March.

The three-year-old defeated fellow top galloper Scissor Kick in the trial which kicked off its new campaign in style as it heads towards the Guineas on March 5.

Hyland said there was plenty of upside about Lizard Island, which will target the C.S Hayes Stakes at Flemington February 20, followed by the Group 1 Guineas where it is paying $26 at Sportsbet.com.au.

“I ran in this trial to find out basically how forward he was and he is right up to where I’d like him to be,” Hyland said.

“There is still room for improvement and there is still 12 days to his first run, and then two weeks to his next run.”

Lizard Island last raced in the Victoria Derby where it finished eighth, and typically adopted a solid front-running style. Hyland was impressed that the colt could sprint with the likes of Scissor Kick, with both horses putting eight lengths on the rest of the field.

Hyland noted that Lizard Island would likely not race past 1600 metres this preparation which could include a trip to The Championships in April.

Mourinho isn’t far away from retirement, but trainer Peter Gelagotis is hoping a good barrier draw will help it claim a few more victims in the Group 1 C.F Orr Stakes this Saturday.

The Group 1 winner was an easy trial winner at Cranbourne on Monday and Gelagotis said Mourinho will follow a similar path to last season.

“He ran in the Australian Stakes last year which he won,” Gelagotis said.

“We just gave him a couple of easy weeks and then a nice jump out and he rolled into the Orr last year and ran a nice third.

“So with a bit of luck he’ll do the same thing. I can walk away and say he honestly trialled a bit more polished this time around, a lot sharper and a lot more zing in him.

“I am walking away from the exercise happy – looking forward to Saturday.”

CrownBet has Mourinho as a $15 chance in the C.F Orr this Saturday at Caulfield and its chances could come down to the barrier draw.

“The Orr is going to be a very hot race this year compared to previous years,” Gelagotis said. “I am mindful that that isn’t our premium distance. The way he went this morning, if he is fortunate enough to draw a gate, and if he doesn’t blunder the start like he did a fortnight ago, if he lands a spot, he might fill a hole and really bowl into the Peter Young with a lot of confidence.”

Gelagotis is also looking towards the Peter Young Stakes at Flemington later this month, but admitted he hasn’t had the best of luck at Flemington with Mourinho.

“Every time we have gone there [Flemington] he has drawn awkwardly, but we might persevere one more time and hopefully we’ll draw a barrier and I think he’ll run well,” Gelagotis said.

“The first time we tried to go forward on him and we got caught out had to do a lot of work and the other we tried to ride him back and gave him a chance, but he didn’t like being in amongst the field and he got dragged back and flustered. He likes to bounce out the machine and put himself in a nice spot and roll at his sort of leisure. And when he doesn’t get that scenario, it sort of makes it hard for him.

“He is a nice horse but needs luck in the running and when he hasn’t had that luck, it hasn’t gone our way.

“But when he has drawn a gate and he has landed in the right spot, he is deadly. He has got some big scalps.”

The Gerald Ryan-trained Spill The Beans was a popular winner for punters in the Group 3 $150,000 Eskimo Prince Stakes on Saturday.

The son of Snitzel was backed in from $9 to $4.80 as it held off strong challenges from Le Romain and Counterattack, but for trainer Gerald Ryan, he’s lucky to have the three-year-old speedster.

The colt failed to get a bid at the Inglis Classic Yearling Sale in 2014 and after winning its first two career starts there was an offer from Hong Kong, but as luck would have it, Ryan got to keep Spill The Beans for himself.

“I loved the colt but he failed to get a bid at the sale as he had so many X-ray issues,” Ryan said. “Then when he won his first two starts, Hong Kong offered money to buy him.

“We had more X-rays done and he still had those issues so the deal fell through.”

John Messara’s Arrowfield Stud decided to keep the colt and state that Spill The Beans has never had a injury problem to date.

“He has never been sore a day in his life, he didn’t even go shin sore as a two-year-old,” Ryan said. “It was a blessing he failed the X-rays, I’m happy he is in my stable.”

Spill The Beans has now won three of its six career starts and Ryan believes it has progressed nicely after being spelled.

“When he won his first two starts, he had not even galloped before that preparation,” Ryan said. “Then during the spring he wasn’t going as good, perhaps because of the short break, maybe he was a bit tired. But I have been telling John he has been going heaps better this time in.”

Spill The Beans is nominated for the Newmarket Handicap on March 12 where it is an outside chance at $41 with Sportsbet.com.au.

The day wasn’t so positive for connections of multiple Group 1-winning Pride Of Dubai which has been retired after a poor showing in the Eskimo Prince.

The Peter and Paul Snowden-trained colt was found to have a bruised hind fetlock, the same injury which kept it out of the spring carnival, and connections have decided to not risk further injury.

The three-year-old by Street Cry will be retired to stud having won the Group 1 Blue Diamond Stakes and ATC Sires’ Produce Stakes, amassing over $1.3 million in prizemoney.

The Snowdens also advised that seven-time winner Dublin Lass will be retired after putting in a poor effort on Saturday.

The Jason Warren-trained Puritan looked impressive when winning the Group 3 Manfred Stakes at Caulfield on Saturday and could now be aimed towards the Newmarket Handicap on March 12.

Puritan is well favoured for the Australian Guineas, but Warren isn’t sure about the rise in distance and the Newmarket could suit his runner better.

“I’m not so sure about stepping up in trip for a race like the Australian Guineas,” Warren said.

“I’m thinking I’d rather give him three weeks between runs. The Zeditave Stakes back at Caulfield falls nicely in to that and if he can win that well then the Newmarket Handicap appeals.

“I reckon he could be a sneaky chance with a light weight for a three-year-old.”

Puritan is a $26 shot with Bet365.com.au for the Newmarket Handicap and Warren relates it to one of his best stable stars of the past.

“He’s pulled up really well and I could not be happier with the way he’s come through the race,” Warren said.

“We were confident he would run well and I was more happy than anything else he showed he was right up to that level.

“I’m thinking he can get to a good level – I rate him as highly as Bel Sprinter who won a Group 1 for us.”