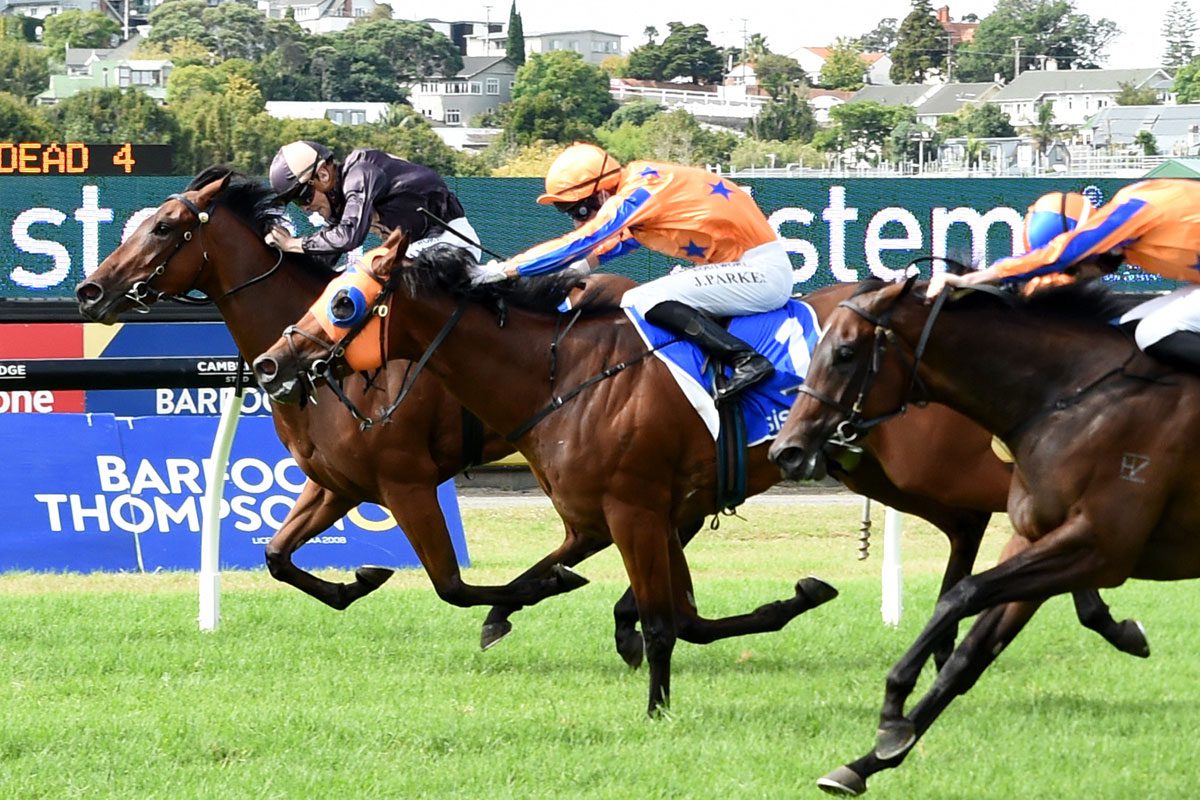 Quality two-year-old filly Lickety Split refused to yield to a sustained challenge when narrowly taking out the Group 1 Sistema Stakes (1200m) at Ellerslie on Sunday.

The Murray Baker and Andrew Forsman-trained daughter of Turn Me Loose had scored impressively at the Auckland course on debut last month but was the most inexperienced runner in the seven-horse field.

Jockey Matthew Cameron made good use of barrier 2 and settled the filly to the outside of leader Alabama Gold, travelling sweetly throughout before issuing her challenge upon straightening for home.

Clearly headed shortly afterwards by Dynastic, Lickety Split refused to give in as she fought back to defeat the favourite by a nose, who held out stablemate Maven Belle by a head for second, with Desert Lightning charging home from last to finish close-up in fourth.

“We didn’t come here to run second or third, we really wanted to have a good crack at it,” Forsman said.

“Matt rode her aggressively. He gave her every chance and she is pretty tough.

“She was game as I thought the colt (Dynastic) had her cold at the top of the straight and we were going to battle on and run a nice placing, but to her credit she is all heart.”

Forsman admitted the stable had liked the filly for some time, but only lifted their initial expectations after her first up victory.

“She has always looked a nice type, but to be honest we were sort of hoping we could win a two-year-old race and then tip her aside as she will make a lovely three-year-old in the spring,” he said.

“We will see how she pulls up now before deciding on anything further, as we don’t need to panic as she is obviously a very valuable filly now.”

Bred by Dean Hawkins and good mate Nick Hewson, who are involved in her ownership with a group of close friends and family, Lickety Split becomes the first Group One winner for exciting young stallion Turn Me Loose, who resides at Windsor Park Stud, where Hewson is the Nominations Manager.

The talented filly is out of the stakes-placed Handsome Ransom mare She’s Slinky who is from a family that extends back to Group 3 Canterbury Gold Cup winner Classic Babe and her Group 2 Waikato Cup (2400m) winning daughter Passchendaele.

The victory brought up Group One win number 57 for Baker, who will retire at the end of April and hand over the solo reins to training partner Forsman for whom Sunday’s Group One was win 25.

Fittingly Baker and Forsman also trained Lickety Split’s sire Turn Me Loose, and Forsman was delighted to send out the first elite level winner for the triple Group One winning son of Iffraaj, whose stocks are rising week by week.

“It’s terrific to train the first Group One winner by Turn Me Loose who is doing a great job for Rod Schick and the team at Windsor Park Stud. He was a top-class horse for the stable and won Group Ones at a mile on both sides of the Tasman,” Forsman said.

“We have a number of his progeny in the stable that we like, and he has been firing on all cylinders of late with winners in New Zealand, Australia and Hong Kong. We actually trained Turn Me Loose’ first winner, first stakes winner and now first Group One winner, so he has been really good to us.

“I think the majority of his stock will excel as three-year-olds and above, including this filly who has done a marvelous job to win a Group One at two.

“It is also great to get a big result for a good group of owners who have supported the stable, including Nick Hewson. She is a valuable filly now and no doubt we will celebrate tonight.”