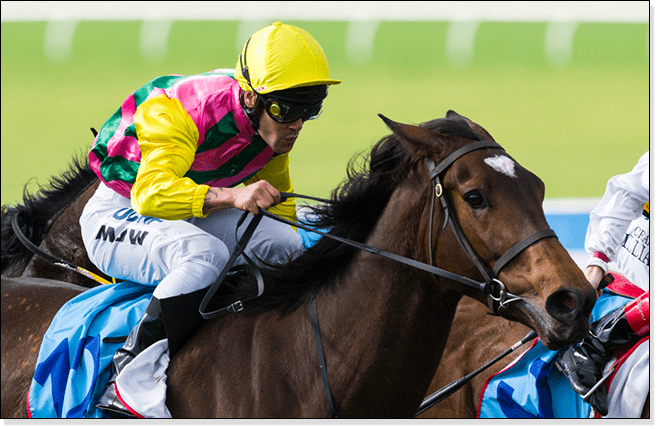 THE 2015 Melbourne Cup is just around the corner and CrownBet.com.au have both fixed odds win and place markets available for punters.

Get up to $1000 in free bets to place on the Melbourne Cup upon sign-up with Crownbet.

After Tuesday’s first acceptances, there are now 82 horses in contention for a Melbourne Cup start with an exemption being awarded to Let’s Make Adeal after it won the Group 3 Bart Cummings at Flemington last Saturday.

Topping the ballot is 2014 Melbourne Cup winner Protectionist. The Kris Lees-trained import hasn’t performed well since, but the increase to 3200 metres will suit the six-year-old and punters haven’t completely forgotten about it.

The highest rated international runner is the Sir Michael Stoute-trained Snow Sky which will carry 58kg if accepted. The Hardwicke Stakes winner is still at good each way odds with bookmakers with many punters siding with the Japanese pairing of Fame Game and Hokko Brave.

Fame Game (57kg) is the current Cup favourite at $8 with Crownbet after finishing second in the Tenno Sho Spring in Japan. The Group 1 feature over 3200 metres has been won by some of Japan’s best thoroughbreds which include Gold Ship and Deep Impact and it is a good Melbourne Cup guide this year.

Hokko Brave gets in well on the weights at 55.5kg and, even though it’s an eight-year-old, it represents good value with bookmakers. The $4.50 for the place has been a popular betting option since the market opened and the Japanese runners have proven their worth over the past few years.

ATC Derby winner Criterion is well up the order, but it appears as though the David Hayes/Tom Dabernig-trained runner will target the Cox Plate instead.

Michael Walker has been confirmed to ride Criterion in both this Saturday’s $400,000 Caulfield Stakes and the $3 million Cox Plate later this month.

53 horses have passed the first Melbourne Cup ballot with 29 others still needing to improve their form to make a push for a confirmed start.

The Chris Waller-trained Preferment has rocketed up the rankings after winning back-to-back races. The former Victorian Derby winner won the Turnbull Stakes last Sunday at Caulfield and that race should stand up well.

VRC Oaks winner Set Square was third behind Preferment in the Turnbull and it looks a strong winning chance at odds of $26 and $7.

Trip To Paris has come in for some specking after it was confirmed that jockey Hugh Bowman would take the ride. Bowman has been in stellar form this season and his decision to partner to Ed Dunlop-trained gelding has caught punters attention.

Not passed runners fancied in the market:

The Chris Waller-trained Preferment has won its last two races and it is looking to become to first horse since Efficient to win the Victoria Derby/Melbourne Cup double.

The Derby isn’t regarded as a key form guide race towards the Melbourne Cup as it comes too early in the season, but Waller has the four-year-old progressing beautifully and its odds have been slashed in the 2015 Melbourne Cup market.

The son of Zabeel now sits at $11 at CrownBet.com.au and Waller believes he has something special on his hands.

“It’s just good to see him showing speed over 2000 metres, not just second-up in Sydney last start but again today [Sunday] against probably some of the better horses around. We know he will get the 2400 metres and beyond so he’s a very special horse.

“He’s certainly matured this year. He was a maiden when he won the Derby but untapped and not pushed to be there. We just let him get there himself. I know the Derby doesn’t always throw up a good record in terms of going towards Melbourne Cups, but with this horse it’s a little bit different. He was very lightly raced and got there himself.”

Waller credited the late Bart Cummings for his help regarding preparation for the Melbourne Cup. He also talked to many other prominent trainers to prepare himself for what could be his first Melbourne Cup victory.

“I will speak to all the people who have been there before,” Waller said.

“I can’t to Bart Cummings but I have spoken to him plenty of times and he has certainly given me help along the way. We will be thinking about what he would be doing. We will just have a chat to the Lee Freedmans, the Lloyd Williams’ and see what they could offer.

“A Cox Plate could come into contention now. It’s a good problem to have,” Waller added.

Jockey Hugh Bowman stated that Preferment is better suited to the wide open track of Flemington, as opposed to the tight-turning track at Moonee Valley.

“Last year even though I wasn’t riding him, I was doing the work with him and I felt the race was coming too soon but he managed to get the job done.

“You saw a glimpse of him in the autumn but wet tracks halted his progress. You only have to look at him, the horse has got presence and when you ride him he’s got a group 1 action. He is developing, he is really starting to mature into a furnished athlete but my gut feeling is that he will be a better suited horse on a galloping track.”

Following in the footsteps of Let’s Elope, granddaughter Let’s Make Adeal has secured its spot in the 2015 Melbourne Cup by winning the Bart Cummings at Flemington last Sunday.

The Nigel Blackiston-trained mare didn’t have a very good winning record leading into the race, but it has earned its spot in the field and Dennis Marks, who raced Let’s Elope, will have another chance to win the Melbourne Cup.

“He’s believed in this mare all along. We’ve tried for a long time over the past few years to try to get her qualified, but this year we’ve done it.

“To finally get that win, that dream that Dennis and I have had for a long time, it’s a very special time.”

The 2520-metre Bart Cummings showed its staying ability and the extra distance of the Melbourne Cup shouldn’t worry the experienced mare.

“She’s always shown that she can stay,” Blackiston said.

“It’s a great moment for everybody. And hopefully the fairytale can continue.”

Let’s Elope was one of the 12 Bart Cummings-trained winners and Blackiston was a stable foreman for Cummings.

“To win this race after the passing of the great man is a great thrill,” Blackiston said.

“I had seven great years with him and it’s very special.”

With a guaranteed start, Let’s Make Adeal is currently $41 at CrownBet in the Melbourne Cup market.