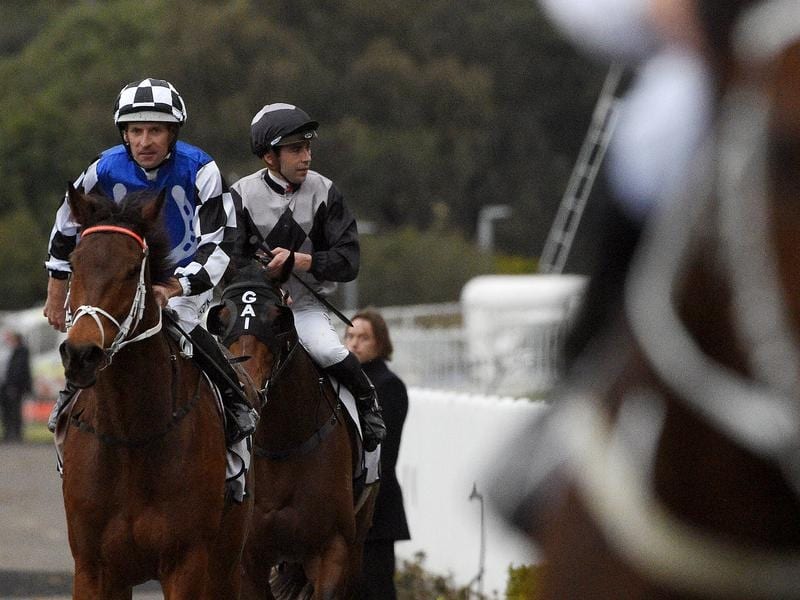 A pair of European imports have put the writing on the wall for the spring and given trainer Kris Lees plenty to think about as he plots their respective campaigns.

Mugatoo and Korcho, both syndicated by Australian Bloodstock, have stamped their class at Rosehill with impressive victories.

Resuming in Saturday’s Listed Winter Challenge (1500m), Mugatoo ($4.60 equal fav) settled back in the field for Hugh Bowman and peeled wide before comfortably rounding up his rivals to beat Sambro ($11) by three-quarters of a length.

Mugatoo’s Rosehill win came on the back of a promising first Australian preparation, highlighted by a Canberra Cup victory and Manion Cup placing.

Next month’s Premier’s Cup (1900m) at Rosehill is likely to be Mugatoo’s next stop but beyond that Lees is keeping an open mind.

“He will be entered for everything. He’s the type who could go to an Epsom or a Metropolitan,” Lees said.

“He was a little bit fresh today but I shouldn’t judge him on that because he was first-up.

“I’m in no rush to get him to weight-for-age but this could be the season to try him at that level because he has the acceleration.”

Lees had been unsure if Mugatoo would be sharp enough to win the Winter Challenge and said a genuine pace helped his cause.

“We probably got a better tempo than what it looked on paper but he picked up some nice horses there and he was pretty strong through the line, which is what we wanted to see,” Lees said.

Riding for the first time in over a month following a winter break, Bowman brought up a treble on Mugatoo following earlier wins aboard Smart Image and Dancing Gidget.

He tracked Sam Clipperton on equal favourite Order Again into the race and said Mugatoo’s victory augured well for his future.

“He’s certainly a class horse and showed that in the final stages,” Bowman said.

“I think he is still very ‘wintry’ in the coat and has improvement in him.

“He put the writing on the wall last preparation and I think he has an exciting future.”

Korcho likewise impressed, backing up a middle-distance win two weeks ago with a 2400 metre victory under Nash Rawiller on Saturday.

Lees believes he will be better again in the autumn but will give him a chance to reach a higher level this preparation.