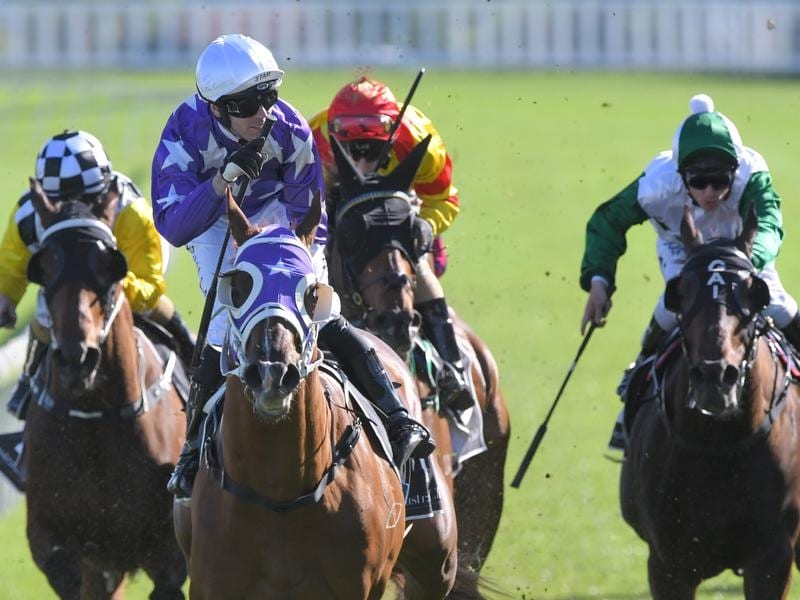 Brenton Avdulla has literally had to scrape paint to win the inaugural $1 million Bondi Stakes at Randwick aboard Kubrick.

The Chris Waller-trained colt started the $3.70 equal favourite in the 1600m-race on Saturday after being brought back from Melbourne following a disappointing effort in the Caulfield Guineas.

Avdulla had Kubrick midfield and posed to strike but with no room to move on the fence, the jockey was desperately waiting for a gap.

That did not happen and Avdulla forced the issue, moving up along the rail to get through to beat Pancho ($21) by a length.

His right boot ended up as collateral damage while Kubrick remained unscathed.

“My foot is on fire from the paint,” Avdulla said.

“He won like a top-class colt. It is amazing what good horses can do.

“I was happy that he was going to get a great run. I thought Timmy’s horse (Just Thinkin’) had to back up from the Spring Champion.Then Bossy came around to keep us tight.”

In the end the win was decisive, with Kubrick putting one length on Pancho ($21) with race leader Colada ($8) another 2-1/4 lengths third.

Avdulla was forced to stand down from rides earlier in the week but came away from Randwick with four winners.

“He was quite keen to get his percentage for the million-dollar race. So you go those extra limits. It’s why it doesn’t necessarily matter whether it’s a Group One if the prize money’s there.

“Any million-dollar race is hard to win,” he said.

“He didn’t have the most amount of luck and at the 300 metres when there was only half a gap, we were very lucky to have a tough colt like him who relished the challenge and bustled his way through.

“And once he was through he showed a nice clean pair of heels.

“I think everyone can forgive him now for his very tough run from an awkward alley in the Guineas.”

Duckworth was naturally pleased with a stable quinella.

“Two nice horses in the stable and I’m sure we’ll go onwards and upwards from here,” he said.

Kubrick is raced by a Star Thoroughbreds syndicate with principal Denise Martin excited to have him back in form.

“This is our third $1 million race this year,” she said.

“There were a lot of people who were very anxious for a moment when Brenton couldn’t get through but it was a super ride and really great job.”