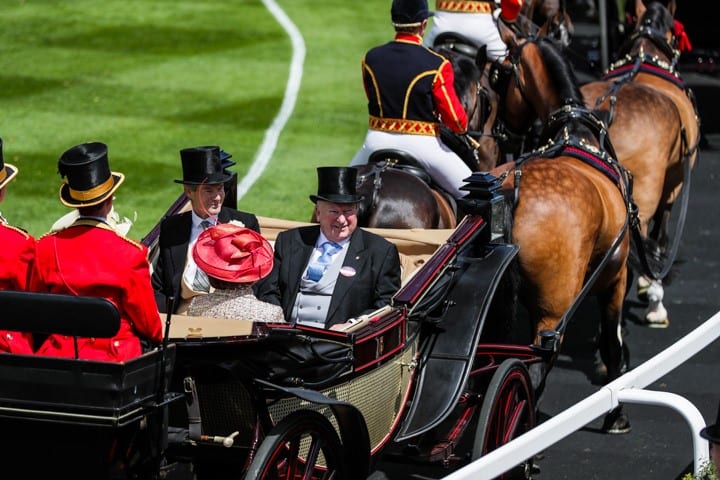 New Zealand has been well-represented in the four-carriage Royal Procession on the final day of Royal Ascot with Rosehill-based trainer Chris Waller enjoying a memorable 24 hours.

On Saturday, the former Foxton horseman landed the Group 1 Tattersall’s Tiara (1400m) at Eagle Farm with Invincibella to provide him with a record-breaking 18th Group 1 win for the season. Waller eclipsed the previous record of 17 set by legendary trainer Tommy Smith in 1979-80 but had a good reason for not being on-course at Eagle Farm on Saturday to celebrate.

He and his wife Stephanie, also originally from Foxton, were thousands of miles away getting ready for an appointment with Her Majesty The Queen as part of an elite line-up. Every day of the five-day Royal Ascot Festival, come rain or sunshine, The Queen arrives at the entrance of Ascot’s straight mile at precisely 2 p.m. Drawn by the famous Windsor Greys, Her Majesty’s Landau leads the procession of carriages up the mile, past the Silver Ring, Grandstand and Royal Enclosure before finishing with a circuit of the Parade Ring.

Prince Andrew, the Duke of York, accompanied The Queen on this occasion in the lead carriage. The Wallers were not the only New Zealanders in the procession, with Sir Peter Vela and his wife Lady Pamela Vela sharing the second carriage with General Sir Adrian Bradshaw and his wife, Lady Bradshaw.

Sir Peter Vela, who was knighted for services to the thoroughbred industry, is the owner of leading thoroughbred auction house, New Zealand Bloodstock, and a successful breeder and racehorse owner through his Pencarrow Stud in Tamahere. Vela was one of six people appointed to the Racing Industry Transition Agency on Friday, with the goal of turning around the fortunes of the New Zealand racing industry.