Kings Shield dominates with Dubai on the radar 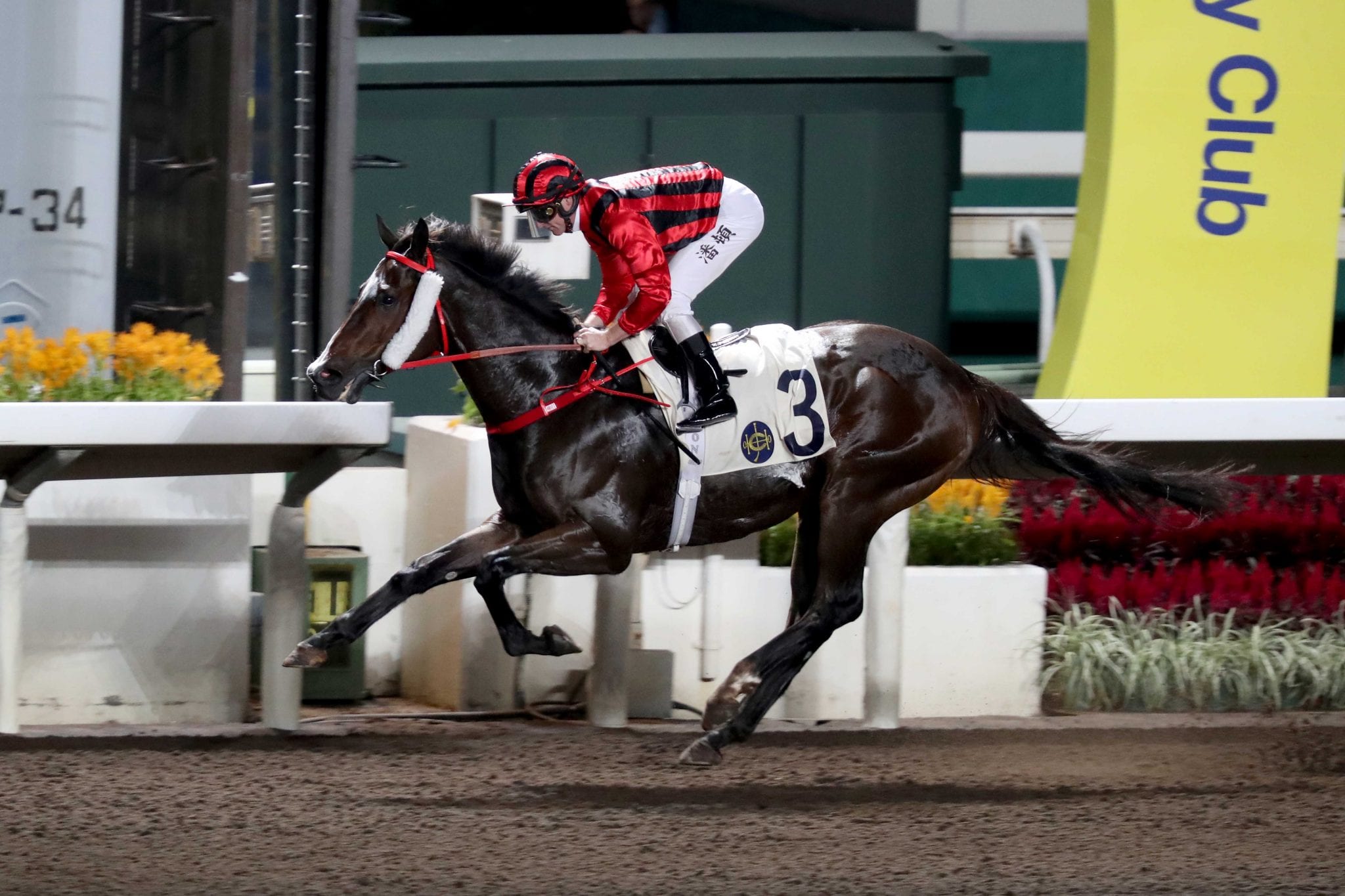 Kings Shield put his rivals to the sword with an authoritative all-the-way win in the Class 2 Hebe Hill Handicap (1650m, dirt) at Sha Tin on Wednesday, 4 November.

The former British-trained import has developed into a force to be reckoned with on the dirt in Hong Kong: this latest win, his third over the course and distance, was achieved off a rating of 98 and will lift him to a triple-figure mark.

But with high class dirt races a rare commodity in Hong Kong, trainer Frankie Lor may have to consider overseas options at a time when international travel is uncertain.

“We’re planning to go to Dubai but we don’t know, with the virus, whether we can go or not, but in Hong Kong there’s not too many dirt races, so I still need to race him on the turf to keep him fit,” Lor said.

Lor’s first overseas sortie as a trainer came in the 2019 KOR Group 1 Korea Cup (1800m, sand) with Glorious Artist, who finished fourth in Seoul but went one place better tonight for third behind his stablemate, while the Tony Cruz-trained Star Performance split the pair in second.

King’s Shield has never been short of quality. The five-year-old finished sixth in the 2018 Group 1 Poule d’Essai des Poulins (1600m) at Longchamp and fifth in that same year’s Group 1 St. James’s Palace Stakes (1594m) at Royal Ascot, but he has turned into a dirt specialist in Hong Kong with his third win on the surface coming at his sixth attempt.

“Zac (Purton) said he’s totally a different horse on the dirt,” Lor said. “The last 400 (metres) when they came near him, he asked him to go and he went again.”

The gelding’s sire, Scat Daddy, was an American Group 1 winner on the dirt, taking the 2006 Champagne Stakes (1600m) at Belmont Park.

“He’s a different horse on the dirt,” Purton confirmed. “Frankie’s (Lor) done a good job to get him ready for the race, not being able to run him in the races he’d like.”

The gelding broke cleanly and was fast to stride, setting the tempo from the get-go, and when the champ asked the favourite to quicken and win his race, he did exactly that, resulting in a three and three-quarter length score, stopping the clock at 1m 39.22s.

“When he flew the gate like he did and jumped straight into the bit, he made it easy for himself and it was easy in the end,” Purton said.

Apprentice Jerry Chau reached a significant milestone in his developing career with a double, signalling the end of the his 10-pound allowance and taking him to a new phase as a seven-pound claimer.

Chau kicked off proceedings with victory aboard Demons Rock in the opener, the Class 5 Tsim Mei Fung Handicap (1200m), before an all-the-way win atop Gunnar in the first section of the Class 4 Tin Ha Shan Handicap (1200m), which took him to the all-important 20-win mark.

“I’m taking it step-by-step and now, with 20 wins, I only claim seven pounds, so I hope I can keep improving and keep winning,” Chau said.

The 20-year-old has been in red-hot form since early October, tallying nine wins from his last 35 rides, including one treble and two doubles.

“I’m very excited and I need to thank my boss Douglas Whyte who gave permission for me to ride this horse, (Gunnar) even though he had one in the race,” Chau said.

Chau now becomes one of two apprentices on the roster with a seven-pound claim, and, while pleased, the young gun is under no illusions about the changes ahead as his advantage is condensed.

“I think it’s a challenge because it makes it harder to get more rides than when you have 10 pounds,” Chau said.

Chau’s 13th win of the current campaign came on his 82nd ride for the term, and gave him a first victory for championship leading trainer Caspar Fownes, who also sealed a double.

“It looked like it was a good ride for the boy – we planned it for a while and thanks to Douglas (Whyte) for letting me have the services of his kid,” Fownes said.

“He’s got the ability to win more races but he has a few issues that Tony (Cruz) had to work with and he had to try figure out how to keep him calm,” Teetan said. “But I think he’s a late maturing horse and he’s coming on nicely.”

The consistent Snitzel gelding secured his third win on the dirt tonight at his sixth start on the surface, while his other three attempts have resulted in second place finishes.

“He’s the type of horse that can still build up because in doing a few things wrong, you can see he tries to hang out and he doesn’t relax, but if he can learn to relax more, I can see him going up a little bit more in the rating,” Teetan said.

Not many horses boast wins at Kyoto, Nakayama and Sha Tin racecourses collectively but Elite Patch does, and tonight, he added his third Hong Kong win to his record with an impressive five-length score to kick off a double for jockey Matthew Poon in the Class 3 Shek Uk Shan Handicap (1800m).

The Francis Lui-trained gelding raced as Clever Patch pre-import and was a two-time winner in Japan pre-import. This win was his first over 1800m.

“Before the race we thought that over 1800 metres he might over-race and struggle to settle in the run,” Poon said. “But today he was pretty relaxed, he settled well behind the leader where he was comfortable and he felt very well in the straight.

“He just relaxed and he was in good condition so I think that’s how he got back his form.”

The Hard Spun galloper stepped out as a 75-rater tonight but following his five-length crushing of rivals he could find himself nestled in Class 2 next time out.

Poon sealed his brace aboard fellow Lui-trainee Lucky Patch, who lengthened to a tidy debut win in the Class 3 Pyramid Hill Handicap (1200m).

“To win first-up in Class 3 is not easy,” Poon said. “I think the horse has ability but you can see he has big strides and he couldn’t pick up at the turn, so he may need further later on but he did well first-up.”

The four-year-old was a two-time winner pre-import at Doomben racecourse in Brisbane, Australia before arriving in Hong Kong as a 69-rater.

John Size and Matthew Chadwick combined with Super Alliances, who managed to stretch clear for a one and a half length win in section two of the Class 4 Tin Ha Shan Handicap (1200m).