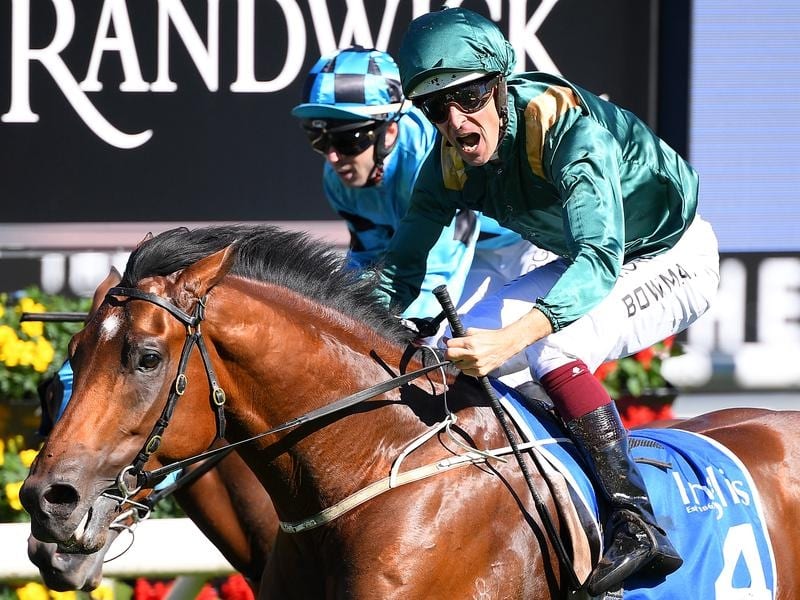 Peter and Paul Snowden’s reputation as stallion makers has again been showcased with King’s Legacy winning the Group One ATC Sires’ Produce Stakes.

The father-son training team has an enviable record with young colts including Pride Of Dubai, Capitalist, Shooting To Win and Revolution.

A son of the late super sire Redoute’s Choice, King’s Legacy was unplaced in the Golden Slipper won by Farnan two weeks ago but appreciated the extra 200m of the Sires’ (1400m) on Saturday.

King’s Legacy ($19), who finished ninth in the Slipper, found the extra 200m of the Sires’ Produce (1400m) to his liking and overhauled Prague ($5) to win by half a length on Saturday.

Favourite Mamaragan ($2.70) was another 1-1/4 lengths third after getting back early in the race.

“He only ran in the Magic Millions because he was up there but that trip toughened him up,” Snowden said.

“We always knew he was a good one but it does so much for them to go away to the Gold Coast, particularly the colts.

“He had the pre-Christmas money in the bank, which allowed us to go straight to the Golden Slipper and you saw the benefit of that run today.

“He was always going to be a horse that was going to get better at 1400 metres.

“I think he will be even better at mile in a couple of weeks but it is exciting to get the group One with because he is very valuable colt now.”

And while there will not be a two-year-old triple crown winner this season, jockey Hugh Bowman is primed to ride the treble after claiming the Slipper on the Gai Waterhouse and Adrian Bott-trained Farnan, with the Champagne Stakes (1600m) to come in a fortnight.

“They would have had a plan for this colt a long time ago and I would imagine the Champagne would be in those plans,” Bowman said

“You saw his will to win today. Prague, who is a superb colt in his own right had the race shot to bits. I was on a horse who wanted to win and wanted to win bad and he had the ability to do it.”

Prague, trained by Ciaron Maher and David Eustace, is also by Redoute’s Choice and even more expensive at $1.6 million.

He has three wins and a second from six starts.

“He looked pretty good but he had to do a bit of work early and it was probably going to have an impact somewhere,” Maher said.

“He is a horse with a lot of upside. He is doing it all on raw ability at the moment.

“He’s not the furnished product yet. I think he’s got exceptional ability.”