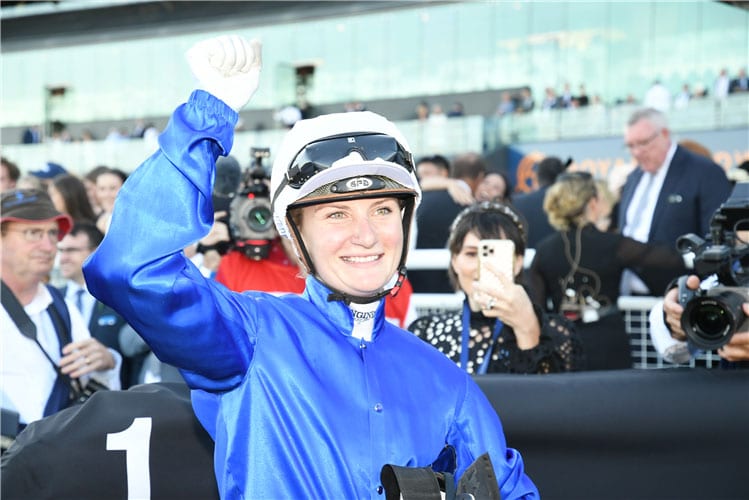 She has taken Melbourne racing by storm and on Saturday at Randwick, Jamie Kah brought her magic touch to Sydney to win one of Australia’s most prestigious races for one of the world’s biggest operations.

A runaway leader of the Melbourne jockeys’ premiership, Kah became the first female rider anywhere in the world to clinch a Group 1 win for Godolphin when she combined with Cascadian to claim Saturday’s Doncaster Mile (1600m).

It was her fifth major overall and her first in Sydney.

Kah said she was thrilled to get the opportunity on the horse, who she knew from his runs in Melbourne.

“I have been in plenty of races with him and seen him go past me and then stop on the line and get beaten, so I knew I had to time the run right,” Kah said.

The star jockey has ridden 80 winners in Melbourne this season, but she said Sydney presented a new challenge.

“It’s a whole different ball game. You know all the jockeys back home and you know what they’re thinking and what they’re doing,” Kah said.

“Out here, I’ve ridden against a few of them but not all of them, so you’ve got to learn pretty quickly and read the jockeys pretty quickly.”

Cascadian’s victory capped a grand afternoon for James Cummings, who also won both two-year-old races with Anamoe and Paulele.

“A couple of years ago we won the Slipper and the Ranvet on the same day. But for Anamoe to convert (in the Sires’) and for the Doncaster trophy to come back to Godolphin is fantastic,” Cummings said.

Icebath looked set to win the Doncaster when she surged through on the fence, only to be nabbed by a Godolphin horse for the second time in a feature race after finishing runner-up to Colette in the Golden Eagle.

She was beaten a head with Dalasan another three-quarters of a length away.

Think It Over was a late scratching after injuring himself on the float en-route to the track.