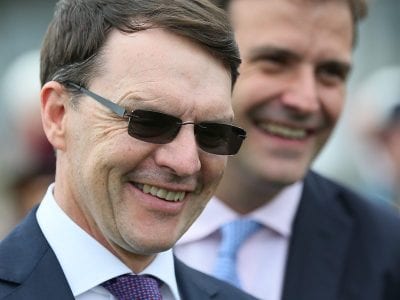 Japan was one of the favourites for the Derby in June and ran third before later breaking his Group One duck in the Grand Prix de Paris.

Racing out of his age group for the first time, Japan was sent out at 5-1 in the Juddmonte with the Sir Michael Stoute-trained Crystal Ocean, who leads the world rankings, the 11-1- favourite.

Crystal Ocean battled his way to the front inside the final two furlongs (400m), but despite displaying his trademark tenacity, Japan more than matched him to win a thrilling duel by a head.

“Ryan (Moore) was over the moon with him,. He’s got better and better. We saw he got a mile-and-a-half (2400m) and we didn’t want to bottom him today, which is why we came back to a mile and a quarter with the autumn coming.

“We couldn’t be happier and the team back home have done a magnificent job.

“He’s a lovely relaxed horse and loads of class. The first time he showed us that real class was when he won the Beresford when he beat two of ours which we knew were good horses.

“We rushed him to get back ready for the Dante, but every rung has been a step up. The three-year-olds are better than anyone thinks. The King George was a bit of a disaster with the soft ground and it didn’t work, but that wasn’t a true reading of the three-year-old form.”

Paddy Power and RaceBets cut Japan to 5-1 for the Prix de l’Arc de Triomphe at ParisLongchamp, while Betfair offer 2-1 about his chances next month’s Irish Champion Stakes at Leopardstown.

O’Brien said Japan could run in both races.