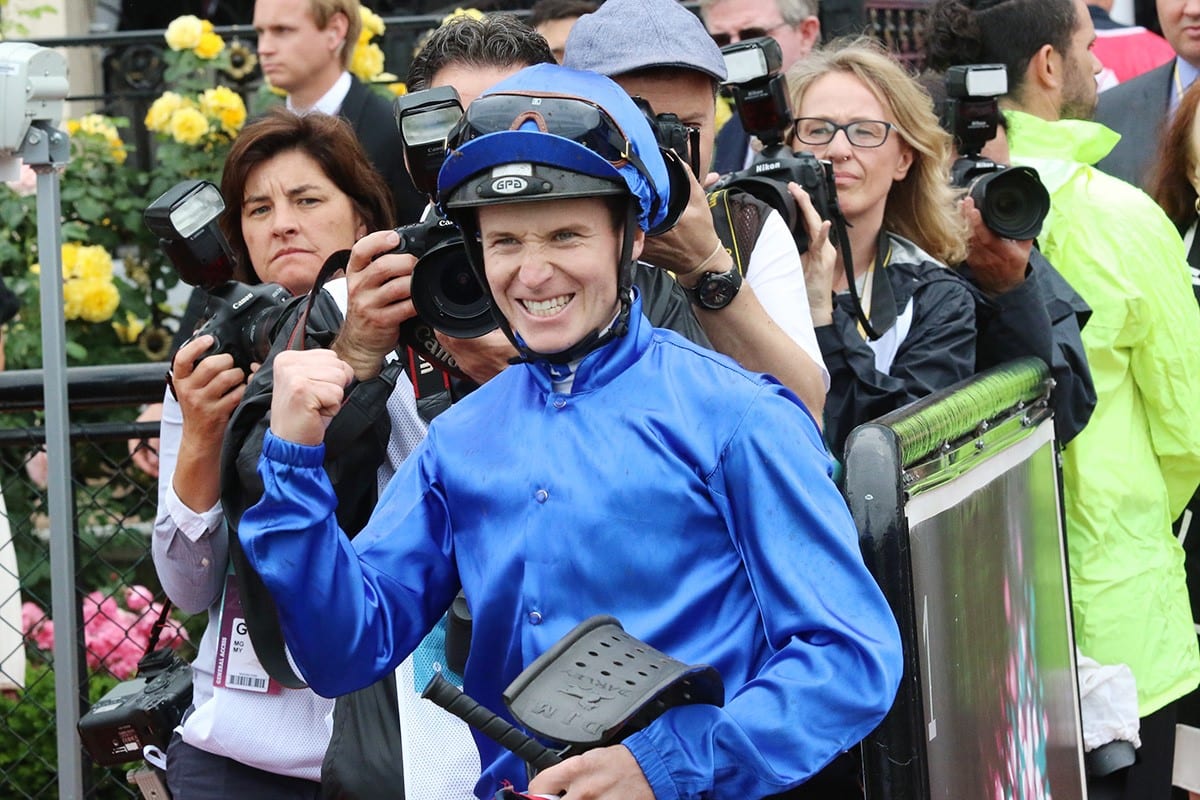 Just 12 years after riding his first winner, James McDonald is about to become the youngest person to be inducted to the New Zealand Racing Hall of Fame.

When his induction takes place at the Hall of Fame gala dinner in Hamilton on May 3, the Sydney-based champion will join 16 other jockeys to have claimed their place in more than a century of New Zealand racing history. “I couldn’t believe it when I got the call, it’s a huge honour and I still get goose-bumps just talking about it,” McDonald said. “To think I’m joining great jockeys like Lance O’Sullivan, Jim Cassidy, Noel Harris and Shane Dye – these are the guys whose photos I had on the wall when I was a boy.”

From the time he first donned silks as a baby-faced 15-year-old, McDonald has been a headline-maker. Apprentice championships came first, followed by a New Zealand premiership record of 207 wins in just his fourth season of riding in 2010-11. Within a year he had been drawn to Australia, where he took no time to stamp his presence. Aged 22 and with 1,000 wins already signed off, he won his first Sydney metropolitan title in 2013-14 headlined by wins in the Group 1 Golden Slipper (1200m) on Mossfun, Group 1 Queen Elizabeth Stakes (2000m) on Dundeel, Group 1 Australian Oaks (2400m) on Rising Romance, and Group 1 Caulfield Guineas (1600m) on Shooting To Win.

Big wins in Australia were complemented by others in Hong Kong and Europe, as well as maintaining his Kiwi connections with successful forays home. His appointment as Australian stable rider for global giant Godolphin was the dream job any jockey would give his eye teeth for, only for it all to fall to pieces.

Breaking the rules with a winning bet on his own mount in late 2015, McDonald had to face the music and then endure an 18-month stand-down. To this day and well beyond he regrets this fit of misguided youthful judgement, but facing up to the challenge, he and his partner, former jockey Katelyn Mallyon, have turned it into a positive. “I made the most of the time away to refresh my approach and came back determined, definitely stronger. What happened to me was a learning curve for not only me but a lot of people, many of them my peers who saw what could happen if you broke the rules,” McDonald said. “I had no negativity against the stewards, after all they were only doing their job, and even though I thought it was harsh at the time, I had to pay the price.”

The next chapter in McDonald’s career is what sealed his status. “From the time I came back in May last year I worked on every aspect of my riding, I was determined to make it work – my weight, fitness, connection with trainers – and by the start of the new season I was ready to hum.”

New Zealand Racing Hall of Famer Chris Waller was integral to McDonald’s comeback, when the jockey claimed his third Sydney premiership and made the most of the opportunities on offer, including a crucial Caulfield Guineas victory on the Waller-trained sensation The Autumn Sun. “I was riding plenty of winners but a bunch of seconds in Group 1’s were frustrating, so to get that win for Chris and everyone else involved with The Autumn Sun was huge,” he said. “I had only been back a short time, he was the short-priced favourite and a high-profile colt that Arrowfield had just bought into, so there was only one option – win.

“Then to top 100 wins in Sydney for my third premiership, it was the best possible outcome and a testament to the people I have around me. Keeping my weight in check has always been the hardest slog of my career, getting down to 54 kilos from my normal weight of 57, but Katelyn has been there and is a massive help.”

Hall of Fame chair Cherry Taylor took immense delight in contacting McDonald to inform him of his pending induction. “I am incredibly proud of James, who I have known since he was just a boy, and what I now see is a young man who has not changed despite his success,” Taylor said. “He is in my mind a worthy addition to the Hall of Fame and someone that our next generation of achievers should aspire to be.”

McDonald’s immediate focus is a visit home this week combining Christmas amongst family and friends with riding at the Ellerslie carnival. An untimely injury to early Group 1 Zabeel Classic (2000m) favourite Supera means he will instead be riding the Baker/Forsman-trained True Enough in the Group 1 Boxing Day feature, while on New Year’s Day his bookings are headed by Queensland raider Winter Bride in the Group 1 Sistema Railway (1200m).

“Riding at home is always something I look forward to,” McDonald said. “New Zealand is where I learnt my craft and it’s a massive buzz at a track like Ellerslie on a big day.”