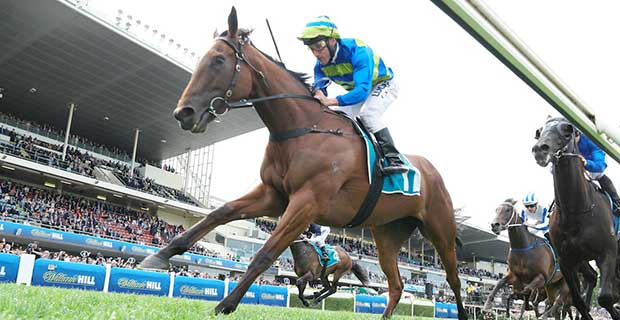 CAULFIELD Cup winner Jameka has been given a 1.5kg penalty for the 2016 Melbourne Cup by Racing Victoria chief handicapper Greg Carpenter.

Jameka will by vying to become just the 12th horse to complete the Caulfield Cup-Melbourne Cup double.

Fortunately (or unfortunately, depending on your view) for Jameka’s team, the ease in which it won the Caulfield Cup was the main reason for its penalty.

“Jameka was a brilliant winner of the Caulfield Cup on Saturday, and has been penalised 1.5kg for this year’s Melbourne Cup, taking her handicap to 53.5kg,” Carpenter said.

“A penalty of 1.5kg represents around three lengths over 3200m, which is the same margin she defeated Godolphin stayer Scottish by on Saturday.”

Previous Caulfield Cup winners Fawkner, Descarado, Master O’Reilly and Sky Heights were all given 1.5kg penalties for their wins, but the best result was Fawkner’s sixth in 2013.

Jockey Nick Hall won’t mind the penalty at all – he had a trying week attempting to make the initial weight for the Caulfield Cup. Hall was seriously deprived of food and fluids to ride the 52.5kg on Saturday, so an extra kilogram will help his chances.

“It will just mean I am stronger,” Hall said.

“We will go to the Melbourne Cup and (Jameka) will win that, too. She will relish the extra distance.”

Only three-time winner Makybe Diva has carried more weight for a mare in a Melbourne Cup, but punters aren’t worried and have taken the $6 on offer at Sportsbet.

Vadamos with something to prove in Cox Plate

French runner Vadamos will be out to prove the 2016 Cox Plate isn’t a two-horse race between Winx and Hartnell.

The Andre Faber-trained runner produced some stellar work at Moonee Valley on Monday ahead of the Group 1 Cox Plate this Saturday and jockey Damien Oliver was pleased with the result.

“I was really happy with him this morning,” Oliver said.

“It’s my second sit on the horse and he was much more relaxed – I think he enjoyed the different track and scenery.

“He adapted to the track very well and probably more importantly, he got on his right leg and switched legs around the corners.

“He’s settling into Australia well – the first time I rode him he was a bit strong, but he settled well this morning.”

Oliver won’t be riding the $15 chance at CrownBet due to a suspension, but champion jockey Joao Moreira is a more-than-capable replacement. Oliver said Vadamos should not be overlooked based on the likely tempo of the race.

“We’ve got Winx and Hartnell in outstanding form at the moment, but I think he’s got the X-factor and probably one of the few that is capable of causing an upset,” Oliver said.

“He’s a forward runner and there doesn’t appear to be a leader or a strong tempo so that should suit him.”

Hong Kong sensation Pakistan Star was beaten for the first time in its short career on Sunday.

The social media phenom has attracted world-wide attention for its last-to-first winning style, but it wasn’t good enough to reel in former Australian galloper, Mr Bogart, at Sha Tin.

Pakistan Star flashed home late, but trainer Tony Cruz believes its weight was the determining factor in the result.

“I think the way his handicap rating went up 30 points in just two starts had a lot to do with it,” Cruz said.

“This horse isn’t fully mature, he is improving but still does things wrong and, when their rating rises so quickly, they have to race too soon against a higher class of competition.

“The way he races, he couldn’t catch the horse on the speed at this level. To me, his performance was up to expectations.

“Mr Bogart is a good type of horse who will be out of Class Two now and Pakistan Star should get his chance to win again next time.

“We’ll probably keep him at 1400m again and my opinion hasn’t changed – this is still a promising, improving type of horse. I didn’t give him this reputation so I’m not disappointed.”

Jockey Hugh Bowman has stated that 2015 Cox Plate champion Winx is better suited to running the Melbourne way, which should put fear in its rivals ahead of this Saturday’s Group 1 Cox Plate.

Bowman has won aboard Winx on 12 occasions with only two coming in Melbourne, but after a gallop on Saturday morning, he believes it is better going left handed.

“She feels as good as she looks,” Bowman said. “It has been a big build-up because this (race) has been the target and having Hartnell there, who I have a healthy respect for, making it even bigger and better,” Bowman said.

“I think she is better the Melbourne way, and the way the Valley is shaped they get into top gear a long way out, at about the 600 metres before they start turning, and that just suits her. She likes that pressure and likes it there. She feels at home.

“She just gives me confidence. I don’t get nervous about the task because I know I’m on the best horse.

“It is not often that you are not nervous going into a big race, but nerves come from doubts for me. I’m very respectful of the others, but it is not often in your career you feel like this. However, we still have to get the job done.”

Winx has shortened to $2 at Sportsbet for the Cox Plate with Hartnell sitting on the second line of betting at $3.