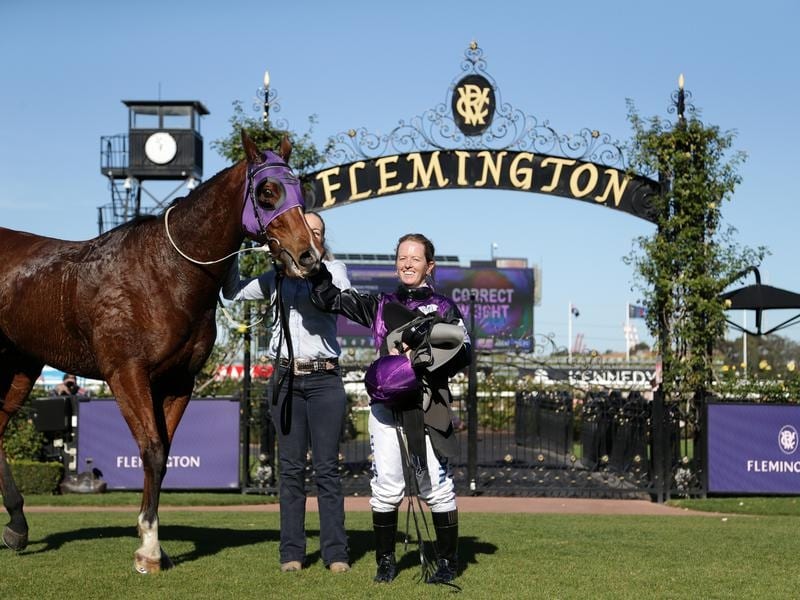 Jade Darose has become the first dual licence holder to land a Flemington winner with her only horse in training Parwan Prince.

Having had a long career in the saddle, Darose, along with Michelle Payne and Rhonda Mangan, was granted a trainers’ licence in 2016 and combined with Parwan Prince to win at Geelong in 2017.

Darose described Saturday’s victory in heat seven of the All Victorian Sprint Series as her biggest moment in racing.

A $12 chance, Parwan Prince under Darose’s guidance led throughout in scoring a short-head win from Miss Norwary ($3.80) with Gibbon ($19) a half-length away third.

The win was Darose’s first at Flemington as a jockey and she had to call on the help of fellow rider Nikita Beriman for guidance in finding the float carpark.

A wrong turn took Darose past the Phar Lap statue before finding the right carpark.

“I’ve ridden winners at Sandown and Moonee Valley before but this is my first here,” Darose said.

“I haven’t been for so long, I didn’t know where to get the horse and the float in.”

A $7000 purchase, Darose said Parwan Prince had more than paid his way in winning a race every preparation since joining her stable.

Darose hadn’t planned on giving Parwan Prince his first run since September on Saturday but with a shift of the Cranbourne trials to the synthetic track she decided on the Flemington assignment.

“He’s not the soundest horse and because his rating is so high now he had to come to town,” Darose said.

“In the last 50 metres I thought I was going to get over-run knowing I had been a bit soft and hadn’t given him enough work.”