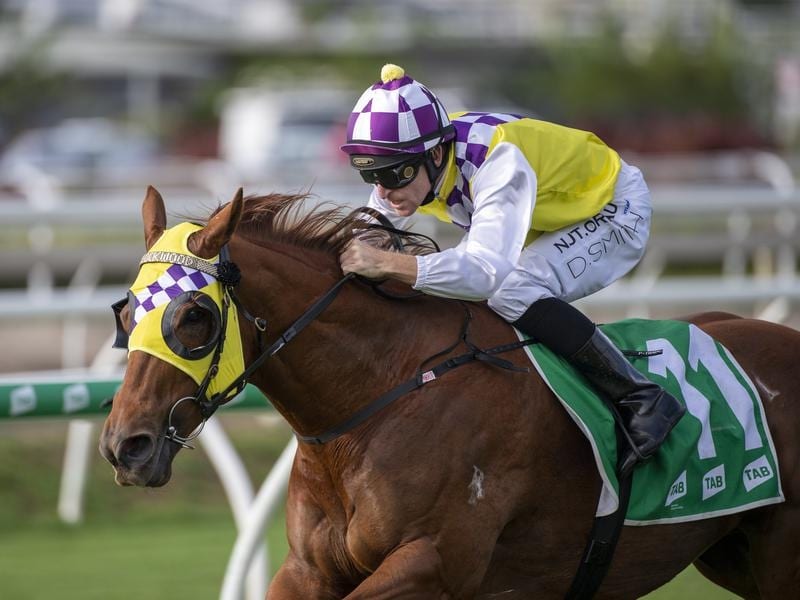 A decision to send In Good Time to Brisbane in search of firmer ground has paid off for Wyong trainer Tracey Bartley, with the mare racing to an upset victory in the Listed Ascot Handicap at Eagle Farm.

In Good Time, having her third start back from a lengthy injury absence, was the $61 outsider in the field of 10 for Saturday’s 1200m race on a good track but upstaged her rivals under jockey Dale Smith to win by 1-1/4-lengths.

Bandipur ($16) was second with $5 equal favourite Scallopini a nose away third.

In Good Time had not won since the Listed Denise’s Joy Stakes at Scone more than two years ago.

Bartley said the five-year-old severed a front tendon in a pool mishap last year and it had been a big team effort to get her back.

After running last in her return at Rosehill last month, In Good Time then finished fourth of five in the At Sea Quality at Randwick on a heavy track on May 23.

Bartley sent her up to Brisbane trainer Barry Lockwood this week for Saturday’s race and is convinced getting dry ground was the key.

He was hoping In Good Time could figure in the placings with the Listed Ramornie Handicap (1200m) at Grafton on July 8 a target for the mare.

“I really thought she was going well and the other day at Randwick I thought her run was really creditable on a really heavy track.

“Rachel King came back in and said there’s nothing wrong with the way she’s going, she just can’t go in the wet.

“Obviously NSW is pretty wet at the moment and we were going to go up there first-up but we decided not to.

“I think to run her on a heavy track at Randwick last start was actually a good grounding for that race today.”