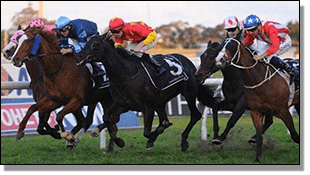 IMPORTED runner Orbec has opened as the $3 favourite with Sportsbet for the Wyong Gold Cup this Friday and it has already pleased trainer John Thompson this campaign.

The former French galloper has settled into Australian life well, with a placing behind Beyond Thankful in its first start.

“I thought it would be too short for him but for a minute or two I thought he had won,” Thompson said.

“I have had a few horses by Le Havre and they have been a bit soft but this horse is tough.

“The step up in distance and the good barrier makes him a big hope in the Cup.”

All going well, Thompson hopes to run Orbec in the Newcastle Cup on its way to the Caulfield and Melbourne Cups.

“After that he will go to the Newcastle Cup, then the Metropolitan then he will be off to Melbourne for the Caulfield Cup while he has been nominated for the Melbourne Cup.”

Orbec’s inexperience concerns Thompson heading forward towards the Melbourne Cup, but he isn’t worried about the 3200-metre distance.

“I know he is tough but while he is a five-year-old here he is only a four-year-old to European time,” Thompson said.

“I guess we will find out as we go along.”

Orbec is currently not favoured in the Caulfield Cup market, with bookmakers offering a massive $101 for the win.

Top jockey Blake Shinn will be riding at Randwick this Saturday, but the hoop will be keeping a close eye on the Toby Edmonds-trained Sagaronne at Moonee Valley.

Shinn rode Sagaronne over the recent Brisbane winter carnival, winning the Listed Phoenix and scoring a place in the Group 1 JJ Atkins Stakes.

Craig Williams has been booked to ride in the Listed Atlantic Jewel Stakes this Saturday, but Shinn will be monitoring the run for later this spring where it will line up in the Group 1 Thousand Guineas and VRC Crown Oaks.

“I thought she would only improve from that winter campaign and judging by the reports from her trials she’s come back in exceptional order.

“I would have loved to have been on her back first-up but with her being in Melbourne, I had a commitment to ride English but hopefully after that I can get back on her.”

Sagaronne is currently a $71 chance for the Thousand Guineas, but Shinn thinks those odds are rather generous.

“Whatever she runs in she’s going to a force to be reckoned with,” Shinn said. “She went from a Gold Coast maiden to winning a Listed race and it takes a good horse to do that.

“She’s got a great physique and gives you the impression that she will get over ground and she attacks the line, her best work is always the last 200 [metres]. To me they are always good signs.”

Sagaronne is only expected to improve out of Saturday’s run and Sportsbet.com.au have it at $10.

The Australian Turf Club is hosting a day of tribute to the late Bart Cummings this Saturday.

All jockeys riding at the Chelmsford Stakes meeting will wear black armbands in honour of Cummings, who passed away early Sunday morning.

A special souvenir book has been published, featuring a Bart Cummings’ honour roll which includes some of his past 268 Group 1 wins.

As a nice touch, the ATC will also repaint sections of the lawn in the famous green and gold silks of Bart Cummings, along with flags of recent colours.

Special permission will be asked of Racing NSW stewards to allow the James Cummings-trained Precedence to lead the Chelmsford Stakes field out onto the course.

“Bart will forever stand in Australian history as an icon of racing, and will always be a special part of Royal Randwick,” Pearce said.

“In offering our support and condolences to the Cummings family, we are grateful that they have agreed to these special tributes on Saturday.

“We join with all of Australia in remembering and thanking Bart for his extraordinary career and the wonderful memories generated over so many decades.”

Sign-up with Sportsbet and claim up to $501 in free bet bonuses.