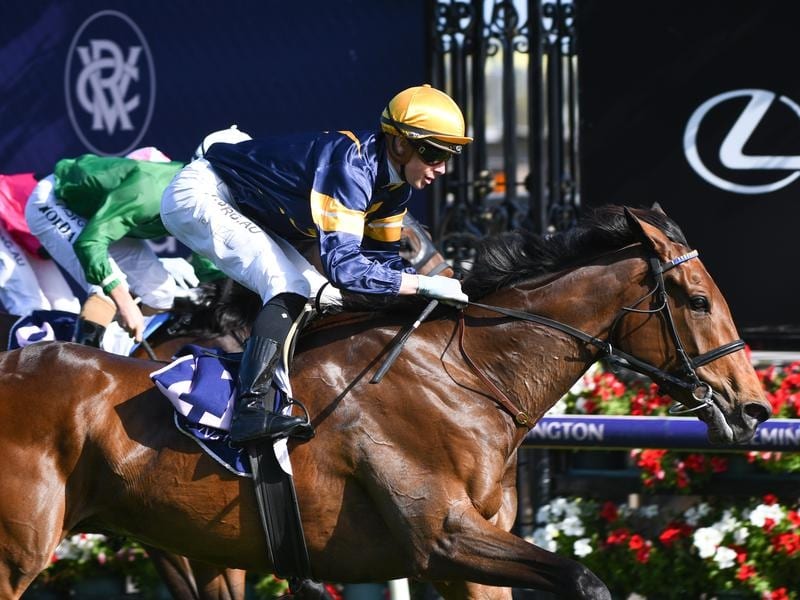 Purchased as a spring Cups campaigner, Aktau has produced the goods in his Australian debut with victory at Flemington.

A northern hemisphere-bred three-year-old, Aktau took out the #Lovethehorse Handicap (1600m) at his first start since August.

Providing Jye McNeil the second leg of a race-to-race double, Aktau ($6.50) scored a three-quarter length win from Sunday Pray ($31) with Ocean’s Fourteen ($5.50) a half length away third.

Trainer Mike Moroney explained connections were looking for a replacement for Vengeur Masque who missed the Melbourne spring due to injury.

“Vengeur Masque has done a really good job for us winning almost $1.4 million, but he missed this year because of injury,” Moroney said.

“But he’s back now and not far off racing..

“I said to the owners we needed to find another one like him, a young horse. This one, he’s a (European) three-year-old, a stayer and looks the right type.”

Moroney said he was surprised with Aktau’s victory but pointed out a soft barrier draw was a big help to the gelding.

“Some of his track riders have said he wants to get on with the job like an Oakleigh Plater (sprinter) but we know he wants more ground,” Moroney said.

“He’s still unmade and to see him do it today was a little bit of a surprise.

“We knew he had the talent there but we were a little worried with what he was going to do with that talent.

Moroney said he would not rush Aktau to a Cups campaign next spring, looking to the following year when Aktau would have more experience under the belt.

“It would be nice for Vengeur Masque to run in one more Cup and then have this guy join in off the back of that,” Moroney said.

Aktau’s victory was the middle leg of a winning treble for Moroney scoring with Alburq in the Candy Cane Lane Plate and Chicago Club in the Mrs Claus Bakery Plate.

“It’s a nice end to the year,” Moroney said.