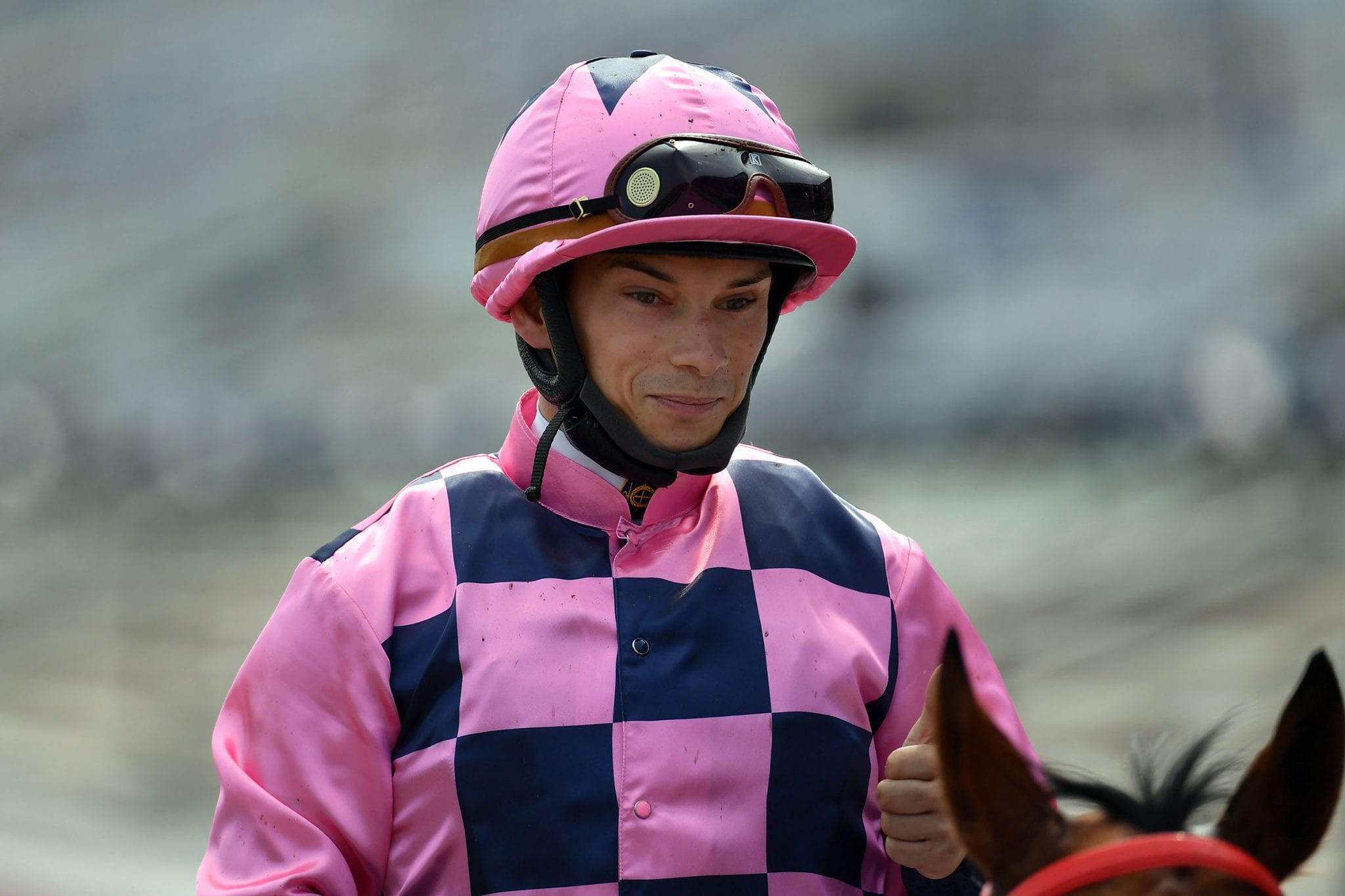 Alexis Badel heads into Wednesday’s (31 March) nine-race all-dirt fixture at Sha Tin only one win away from his 100th career success in Hong Kong and the Frenchman is eager to notch the milestone victory as he readies for a renewed association with Righteous Doctrine (115lb) in a hot edition of the Class 2 Cuckoo Handicap (1650m).

Firmly cemented in this season’s top five, Badel has thrived through March with seven wins, enhancing his tally to 42 so far as he enters the pointy end of his first full-season in Hong Kong.

“I’m happy this season – it’s going pretty well but I’m never satisfied, I always want to improve and do better but I can only be happy about the support that I have had so far,” Badel said. “Hopefully it keeps going – it would be very nice to have 100 winners soon.”

Engaged in five races this evening, the 31-year-old’s mounts round out in the finale atop Righteous Doctrine for trainer Michael Chang, a French import with three Hong Kong wins to his name, twice on the dirt over 1800m.

“It seems a difficult race, but when Michael (Chang) asked me to ride the horse I confirmed straight away because he is a very good horse on the dirt,” Badel said.

“The horse is getting older but I just hope that he can give it his best tonight, he’s got the rating, he gets in light and he’s drawn well, so he should have no excuse,” Badel said.

Badel hops aboard the six-year-old son of Siyouni for the fourth time after partnering him to a close-up third and second-placed effort last season, both times on the dirt.

The Frenchman trialled the galloper nearly a fortnight ago on the dirt, finishing a restrained ninth against 10 opponents.

“I trialled him once and he went well enough,” Badel said. The pair will step away from gate two.

While the career century in Hong Kong nears for Badel, he also has his sights firmly on a HK$4.5 million Group 2 Sprint Cup (1200m) conquest at Sha Tin on Monday, 5 April when he and Wellington look to continue their ascent through Hong Kong’s sprinting ranks.

“I believe he is a very good horse and I always thought he was a top-class horse, so fingers crossed,” Badel said of the All Too Hard youngster.

“He always has been a very good horse and I couldn’t ride him when I left Hong Kong – I’m just happy to be back on him.”

“I was aboard him on debut and he has that turn of foot that very good horses have,” Badel said.

The Richard Gibson-trainee is among 14 entries for the contest which is set to feature Classique Legend, Sky Field, Winning Dreamer and Computer Patch.

Karis Teetan’s 10 wins on the Sha Tin dirt this season is unrivalled and tonight the ‘Mauritian Magician’ is aiming to bolster his record with eight rides, including the mount on Little Thunder in the Class 5 Tern Handicap (1200m).

The Australian-bred is a one-time winner in Hong Kong, scoring over this course and distance last season in Class 4 but has since taken a step back to the bottom grade this term for three consecutive placings.

“I don’t think it’s an overly strong race and I thought his run last week at the Valley felt very good – I think he’s going to have his chance,” Teetan said.

The Hussonet gelding steps out on the seven day back-up after finishing third over 1000m at Happy Valley last Wednesday (24 March).

“I thought his run last week was a good run – he is on the quick back up so I’m sure the horse must be feeling well for Tony (Millard) to back him up but he’s won on the dirt before and he handles it well,” the Mauritian said.

Joao Moreira and Jerry Chau have the joint second-most wins on the dirt this season with six successes apiece, while Zac Purton has five.

On the card, Teetan also pairs with Man Star in the Class 3 Mesia Handicap (1200m) for trainer Jimmy Ting. The chestnut was a close-up winner two starts ago before snaring third last start.

“I think he likes racing on the dirt – he trialled well on it so it was time to race him on the surface and it seems like he’s enjoying it at the moment,” Teetan said.

“I think the horse is in very good form, he’s holding his condition and with the gate I think we should get a lovely run,” he added.

In the night’s highest class affair, the Class 2 Cuckoo handicap (1650m), Teetan will get the leg-up on Holy Heart (114lb) for trainer Francis Lui in a bid to surpass a number of Hong Kong’s supreme dirt talents.

“He comes into this with a nice little weight so that will help him because it’s a strong race with Elusive State, you have to respect him when he gets to the dirt but I think he can finish strongly with the light weight and a fast pace,” Teetan said.

In the finale, champion jockey Zac Purton will take the reins on Glorious Artist for trainer Frankie Lor, opting against stablemate Kings Shield whom he won aboard earlier this season.

“I just feel Kings Shield has lost his way a little bit – I know it’s hard to gauge how he is going on the grass because he is a completely different horse on the dirt but the last time I rode him on the dirt his performance was not what it normally should be and I have that in the back of my mind.

“I also think that there is going to be a bit of pressure in this race, there will be a bit of competition for the lead and therefore I elected to ride a horse that is better weighted and can sit off on a strong speed,” Purton said.

Glorious Artist will carry 9lb less than Kings Shield and will depart from gate nine. The Irish-bred Zoffany gelding usually settles close to the speed while Kings Shield’s three Hong Kong wins have all come from the front.

“He’s got the class still to be able to win the race, so hopefully I can just sit in the right spot and get the job done,” Purton said.

Glorious Artist is a two-time winner this term and since November has shuttled back and forth from Conghua.

“He trialled well at Conghua, he can come from behind so if there is a fast pace it’d be nice if he can finish off for prize money or get the win,” Lor said.