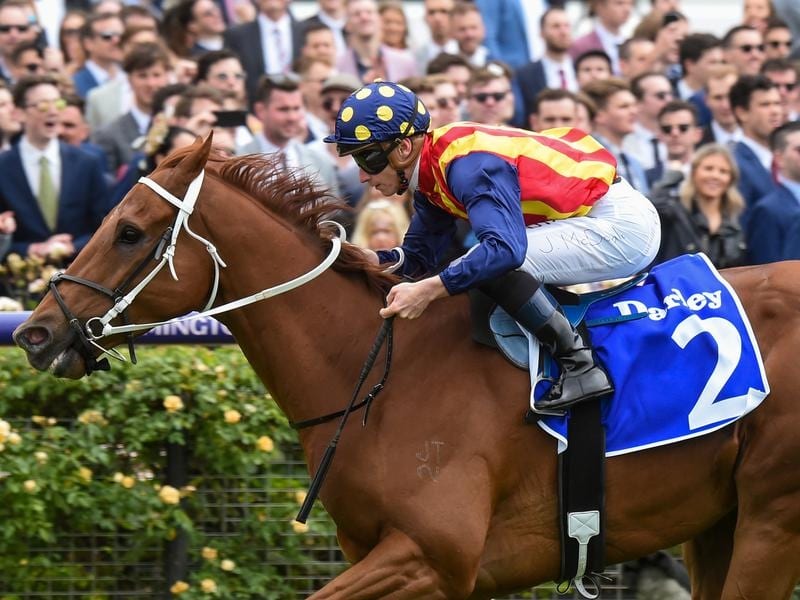 Hugh Bowman will partner Nature Strip in the VRC Sprint Classic after James McDonald lost his appeal against a careless riding suspension.

McDonald has been the horse’s regular rider for the past two seasons and was in the saddle for his last-start seventh in The Everest.

But after being outed for his ride on Horrifying in the opening race at Flemington on Derby day, McDonald on Wednesday failed in his bid to have the 12 meeting ban overturned.

Bowman will be having his first race ride on the Chris Waller-trained speedster, although he did partner him in a barrier trial earlier this year.

Both horse and jockey will be hoping to turn around their spring fortunes in the Group One Flemington sprint.

An early favourite for The Everest, Nature Strip’s form has been below par and he is winless this campaign.

Nature Strip will be chasing back-to-back wins in the Group One Sprint after romping away with the race last year.

He will have nine rivals on Saturday, including 2018 race winner Santa Ana Lane, and emerging sprinter Standout.

Standout was scratched from the Yes Yes Yes Stakes in Sydney last week due to a heavy track but co-trainer Gerald Ryan said the Flemington race had always been his main goal.

The horse will travel to Melbourne overnight on Wednesday and Ryan expects him to enjoy the expanses of Flemington.

“Straight track, bit of room, he shouldn’t get cluttered up,” Ryan said.

“A couple of high profile jockeys have suggested to me a few times that they would love to ride him up the straight.”

Craig Williams has picked up the ride aboard Standout on Saturday.

The Sprint is one of two Group One races on the final day of the Melbourne Cup carnival, along with the Mackinnon Stakes (2000m).