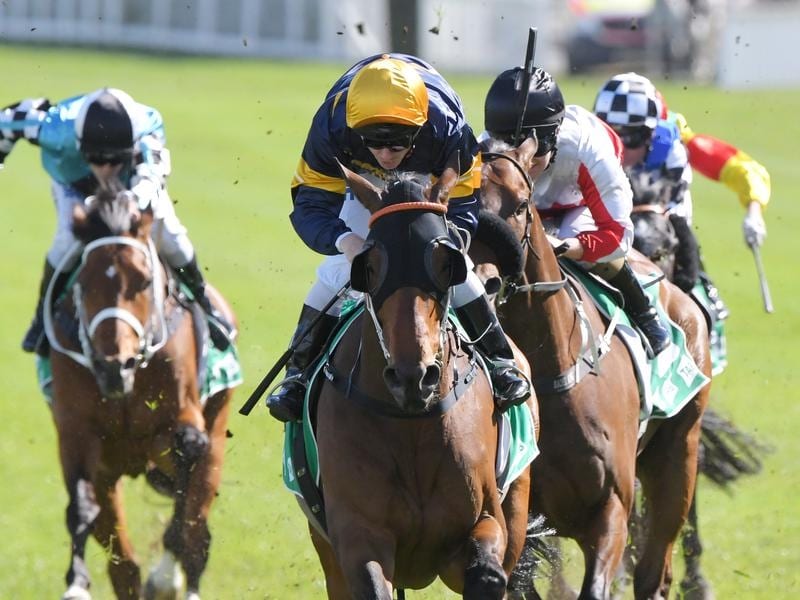 All options remain on the table for up-and-coming stayer Master Of Wine after he produced a dazzling turn of foot to win the City Tattersalls Club Cup at Randwick.

His victory came nine years after the Hawkes team last claimed the race with Maluckyday, who went on to win the Lexus Stakes that spring and finish runner-up in the Melbourne Cup.

While the timing of the City Tatts this year makes that task onerous for Master of Wine – the race was 10 days earlier when Maluckyday triumphed – co-trainer Michael Hawkes hasn’t ruled out a belated Cup bid.

“It is tempting but as we always do race day, we’ve got to get them home and see how they are,” Hawkes said.

“It’s a quick back up next week but we’ll let the dust settle.

“He would probably benefit from a good break and come back in the autumn, that’s what I personally feel, but we don’t make those decisions race day.”

Master Of Wine, the $2.25 favourite, backed up his last-start victory with a dominant 2-1/4 length triumph in Saturday’s Listed 2400-metre race.

He settled back in the field off a moderate tempo, tracking into the race approaching the corner and exploding clear to beat Maurus ($21) with another three-quarters of a length to Master Of Arts ($11).

Hawkes compares Master Of Wine favourably to Maluckyday and says the selling point for both horses is their acceleration.

“Maluckyday was a lot bigger and a lot stronger but this bloke has got the turn of foot that Maluckyday has and that’s what you need,” Hawkes said.

“That will get you to the next level and that’s what we’re hoping this bloke will do.

“He’s a really nice horse in the making and hopefully this time in 12 months he’s going to be something.”

Winning jockey Tim Clark said Master Of Wine did not relax as well in the run as he did last start but still had a significant edge on his rivals.

“He’s done a really good job to go keen early and throughout the whole race and show a turn of foot like that, so he’s obviously got a lot of promise,” Clark said.