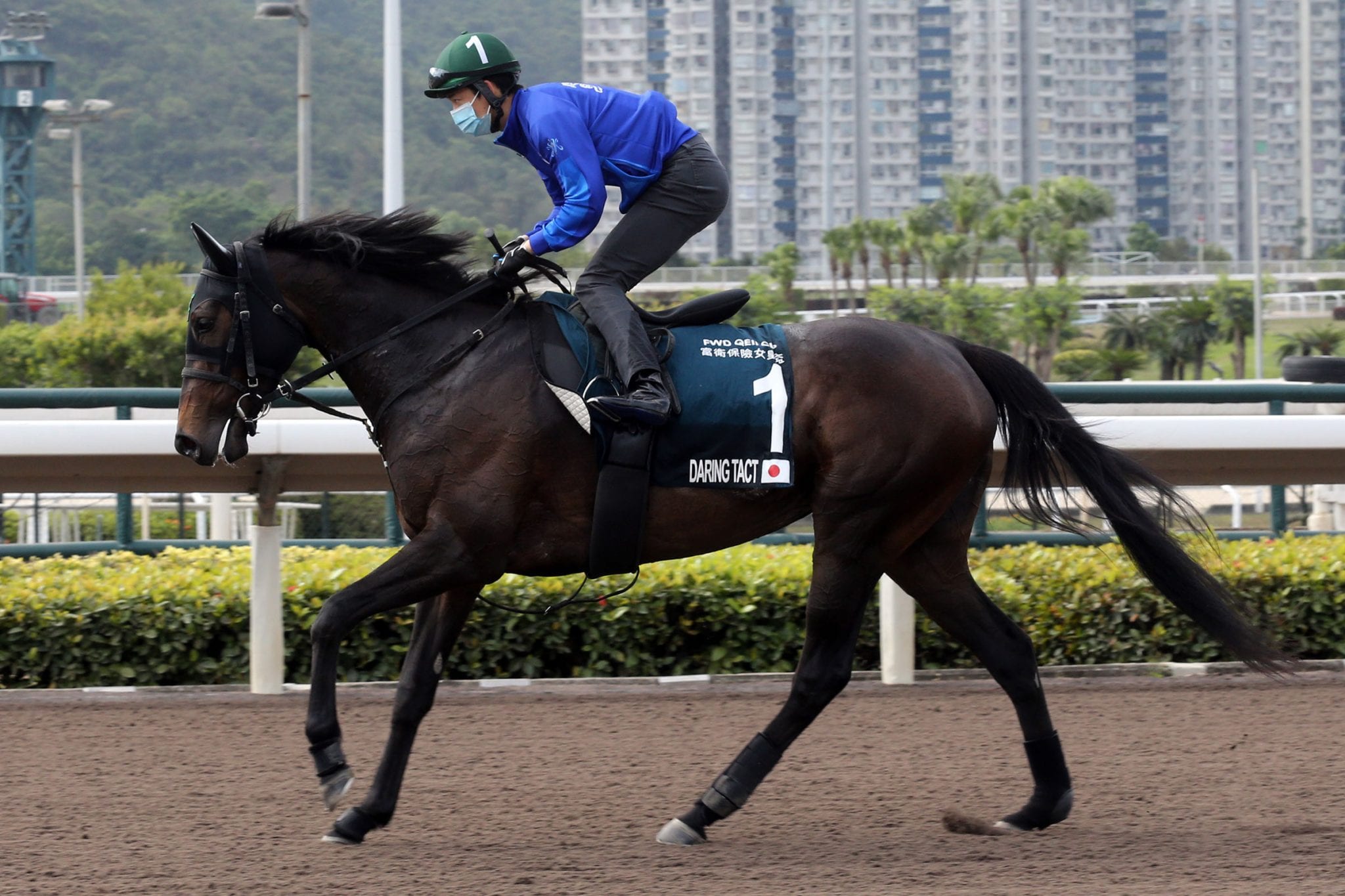 Unfazed by the memories of successive defeats, trainer Haruki Sugiyama is adamant Daring Tact can reproduce the stunning form which elevated the mercurial Japanese filly to champion status as she prepares to tackle the Group 1 FWD QEII Cup (2000m) at Sha Tin on Sunday (25 April).

Sugiyama’s confidence on an imminent return to the winners’ circle against world-class opposition on Sunday is founded in the four-year-old’s growing maturity.

“Comparing between the Kinko Sho and the Japan Cup, she was much more settled and relaxed at the parade ring and the starting gate, so I saw some sort of improvement with her temperament, which I am happy with,” Sugiyama said.

“The most important thing is how she performs – if she shows the top of her ability this weekend, I am – as well as my team – confident that she is the best horse in the field.

“But I know all the other runners in this kind of race are tough to beat so I am just trying to concentrate on how we can improve her before this weekend.”

Daring Tact cantered a lap on the dirt track on Tuesday morning (20 April) under regular jockey Kohei Matsuyama, who Sugiyama views as a calming influence on the occasionally volatile filly.

“Last start, the excuse was mostly the ground condition. I am 100 percent confident Matsuyama knows this horse better than any other rider in the world. It is a clear and easy decision to put Matsuyama on her in this race,” Sugiyama said.

“He is keeping good harmony with the filly – so if I relax and the filly relaxes, probably the best result will come to us. Pace at the moment is not a great concern for me.”

“My filly is special in her ability. She is a very good filly to train.”

With five straight wins at the start of her career, Daring Tact became the first horse to remain unbeaten en route to her Japanese Fillies’ Triple Crown success with victories in the Oka Sho (1600m), Yushun Himba (2400m) and Shuka Sho (2000m) – all at Group 1 level.

Sugiyama is happy with the way Daring Tact has settled in at Sha Tin as she prepares to cross swords with fellow Japanese contenders Loves Only You, Glory Vase and Kiseki as well as Hong Kong’s Exultant, Time Warp, Furore and Glorious Dragon.

“The first two or three days because the environment was new for her, she was not quite relaxed at all times and same goes with the track also so we gave her rest on Monday but this morning (Tuesday, 20 April) Matsuyama brought her out and rode her and she was relaxed – I am very happy with her.”

Matsuyama, the only Japanese jockey to feature at FWD Champions Day this year, places little credence in the Kinko Sho defeat.

“She had excuses that day, ground conditions were a bit unusual,” he said. “She is a great filly, an outstanding horse – she cannot compare with anyone else.”

Yoshito Yahagi, who has successfully blazed a trail globally with outstanding gallopers such as Lys Gracieux (2019 Group 1 Cox Plate, 2040m) and Real Steel (2016 Group 1 Dubai Turf, 1800m), as well as Contrail in Japan, is seeking his first Hong Kong win with Loves Only You.

“Lys Gracieux won in Australia and Japan (both at Group 1 level), but unfortunately she didn’t win in Hong Kong so this is kind of for me revenge in Hong Kong,” Yahagi laughed.

“Four Japanese horses are really competitive, high-level horses. All of these horses are great horses. My horse did really well in Dubai (running third to Mishriff in the Group 1 Dubai Sheema Classic, 2410m) and I believe she is really good enough against these horses.”

One of the most accomplished – and flamboyant – figures in world racing, Yahagi explained the choice of Vincent Ho as the five-year-old mare’s rider.

“It’s very difficult because of the Coronavirus to bring a Japanese jockey to Hong Kong so we selected a jockey from Hong Kong and I believe Vincent Ho has the strongest passion of any jockey at the moment in Hong Kong,” he said.

Ho, who also partners Golden Sixty in the Group 1 FWD Champions Mile (1600m) and Stronger in the Group 1 Chairman’s Sprint Prize (1200m), is excited at the prospect of riding Loves Only You.

“I can’t wait for Sunday to come. She’s settled in really well, everything is good. Once she gets on the track, she is really concentrated which shows how professional she is,” he said.

“Everything is smooth and nice. I’m really happy with how she is at the moment.

“She performed really well in the Dubai Sheema Classic. She ran really close to Mishriff, who is one of the exceptional horses in the world. She’s going to be really competitive here because she’s also settled really well here.”