Hartnell vs. Winx match race on ice till 2017 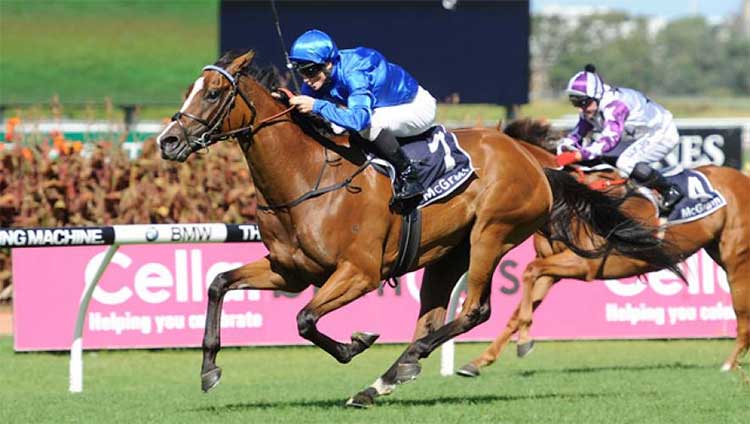 AFTER impressive wins at Randwick on Saturday, the talk of the entire racing industry is a potential race between Winx and Hartnell.

Unfortunately for racing lovers, it seems the horses are destined for different paths this spring.

Trainer of Hartnell, John O’Shea, said a possible meeting between the two is unlikely to happen until next autumn as Hartnell will target the 2016 Caulfield Cup and not the Cox Plate, which is where Winx will head to defend its title.

“I don’t think they will meet until next autumn,” O’Shea said.

“We like to get our toe into the ground and we like Randwick, so if we are going to race her we want to make sure it’s on those (terms) because she is pretty bloody good.”

Hartnell’s next run will likely either come in The Metropolitan, the Craven Plate in Sydney or the Turnbull Stakes in Melbourne before ultimately heading to the Caulfield Cup where it’s currently the $6 favourite at Sportsbet.com.au.

Winx is staying on track and heading to the Caulfield Stakes on October 8 in preparation for another Cox Plate tilt on October 22 where it’s now the red-hot favourite at $1.90, but that price should continue to drop with the likely exclusion of Hartnell ($11).

Quality mare Lucia Valentina is a winner of the Group 1 Queen Elizabeth Stakes, which is great form for the upcoming Underwood Stakes at Caulfield this Saturday.

The mare’s Newcastle-based trainer Kris Less is confident the form behind Winx and Hartnell in the Group 2 Warwick Stakes last start will hold up well during the Melbourne spring carnival.

“She finished next to Hartnell that day and it looks like the right form,” Lees said.

“This race was always the plan and then third-up into the Cox Plate, she likes to be kept fresh and have her runs spaced as she has got older.

“When you look at what Hartnell and then Winx did on Saturday, I’m happy we made this choice. They are going super and gives you confidence from that first-up run.”

Lucia Valentina will gallop at Caulfield on Tuesday morning and Lees has been training it left-handed since the Warwick Stakes.

“She has been going well on her Melbourne leg at home and continues to improve,” Lees said.

“She is looking for the 1800 metres and you have to remember she won the Queen Elizabeth last preparation second-up, so I have no worries about her fitness or ability to run the trip.

“We designed the program to get the Cox Plate third-up, where she has won group one’s in past over 2000 metres.”

Stablemate Rosa Carolina is heading towards the Thousand Guineas Prelude where Lees has secured Kerrin McEvoy in the saddle. Lees is also planning a preparation for Guard Of Honour, which won the Heritage Stakes at Randwick on Saturday.

“We have booked Kerrin McEvoy for the Thousand Guineas Prelude and Blake Shinn in Sydney for the Reginald Allen (Stakes). She (Rosa Carolina) will work at home on Tuesday and then we will look at the nominations and decide which is the better option for her,” Lees said.

“He (Guard Of Honour) has pulled up well from his win on Saturday, we will go to the Roman Consul next, then think about the Coolmore (Stud Stakes). He is a colt and the group one is appealing.”

Rosa Carolina is currently an outside chance at $61 at Sportsbet for the Group 1 Thousand Guineas on October 8.

First Seal defeated Winx in the first five of their seven meetings, but hasn’t been the same horse since.

Trainer John Thompson has declared that the mare is now fully-fit heading into the Golden Pendant at Rosehill on Saturday.

“That is as good as I have seen her go in a gallop like that,” Thompson said.

“There has always been something that has been worrying her and sometimes we didn’t even know what it was.

“It probably shows how good she is that her record is so good.”

The list of injuries is extensive for the group-winning mare, which Thompson has worked tirelessly to get back to full fitness ahead of its resumption this Saturday.

“She had a keratoma in the hoof, which meant she missed last spring and then we had her right first-up in the autumn and everyone saw what she did,” Thompson said.

“But after that in the Canterbury Stakes she fractured a splint bone but didn’t show any signs of it until we scanned her at the end of the preparation.

“She is a pretty tough mare and I’m pleased to have her back and ready to go without any problems – touch wood.”

First Seal finished second behind Holler in the Canterbury Stakes and was subsequently fourth behind Winx in the George Ryder Stakes before running poorly in the Doncaster Handicap.

Thompson believes the best could be yet to come for First Seal.

“It is just good to see her back and going well and when she is right she has always been very hard to beat,” Thompson said.

“She is still relatively lightly-raced and I think she is a mature mare now and we could still have the best of her in front of us because she is pain free.”

Blake Shinn will take the ride on First Seal this Saturday and is confident of a good effort after a pleasing gallop on Saturday.

“She just felt so smooth in her action and strong. I’m looking forward to Saturday,” Shinn said.