Gust Of Wind blows opposition away in Australian Oaks 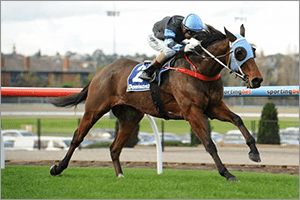 GUST Of Wind scored an upset win at odds of $17 with CrownBet.com.au to win the 2015 Australian Oaks at Randwick on Saturday.

The John Sargent-trained filly has now won three from five and has amassed over $700,000 in stake money – after being purchased for just $90,000.

Connections had a tough call to make after the filly finished fourth in the Adrian Knox on Monday, but the decision paid off for all.

The $24,000 late fee was paid by owner Oliver Wong, who owned both Sargent-trained runners in the field – the second of which being Thunder Lady, which finished fifth.

Despite winning its maiden in extremely impressive fashion over 1400 metres, punters didn’t fancy the daughter of Darci Brahma, but master Oaks trainer John Sargent was confident.

“She just crept through the field, lovely ride by Tye [Angland], and she finished off strongly.

“They seemed to be winning on the fence, so it didn’t worry Tye where he went and she just kept hitting the line stronger and stronger.”

Jockey Tye Angland was confident throughout the race that his mount was travelling well enough to win.

“You look at her runs and she’s definitely a staying filly, she hasn’t got that turn-of-foot, and they rolled along nicely enough,” Angland said.

“I felt I was going good enough to really serve it up to them and get them off the bridle chasing and breaking their hearts a long way out.

“In doing that I broke their hearts and they just couldn’t catch me.”

Gust Of Wind gave Sargent another Oaks success after the New Zealand trainer has won the VRC, Queensland and New Zealand Oaks to date.

“I think a lot of them have been New Zealand-bred staying type of fillies and they seem to peak at three, so you have got them revving at three against their own age,” Sargent said.

Gust Of Wind and Thunder Lady will spell ahead of their spring campaigns.

A wide range of different training approaches has been needed to switch Delectation into racing mode, but the adjustments finally paid off on Saturday.

The Chris Waller-trained gelding scored a gutsy win in the Group 2 Arrowfield Sprint at Randwick on Saturday after holding off challenges from the fast-finishing Bring Me The Maid and Rekindled Power.

“I think there’s a good 1200 metre sprint in him in the spring,” Waller said.

“I wouldn’t be tempted by the ($2 million) Stradbroke [Handicap] because I think the 1400 [metres] is beyond his best.

“His run in the Newmarket was good behind Brazen Beau, Chautauqua and those horses. He’s a 1200-metre horse, we know that now.”

Delectation has shown poor track sense in the past but the son of Shamardal produced a professional run on Saturday.

“Hugh Bowman’s done a fantastic job with the horse. He’s a hard horse to ride, he races in the pacifiers which help him settle,” Waller said.

“He got a bit tired late but we don’t worry about that now.”

Bring Me The Maid ($8 at Sportsbet.com.au) continued its great form fresh up and flew home for second with Rekindled Power finishing off well along the inside for third.

It had been a tough day for punters across the board, but Avoid Lightning brought some sunshine to Randwick in the final race of The Championships.

The Les Bridge-trained runner won the 1200-metre Group 2 Sapphire Stakes paying $3.70 at WilliamHill.com.au, saving punters from an awful day at the track.

Jockey Tim Clark nursed the favourite until the 200-metre mark until he let the mare go. It was challenged strongly by Griante before eventually winning by a half-length.

Avoid Lightning hasn’t yet scored the credentials Bridge’s other mare Hot Danish did, but he admits to having few mares betters than her.

“I have had a lot of good mares, but she’s the best wet-tracker,” Bridge said.

“She [Hot Danish] was the opposite, her chink in the armour was that she couldn’t go in the wet.”

Bridge stated he was surprised to see Avoid Lightning up on the pace but that suited the conditions of the day.

“I got a shock, I wasn’t real happy to be truthful but the way the track is playing I knew Tim didn’t want to be too wide or back on her,” he said.

“She’s just a quality mare and that’s what they do.”

Avoid Lightning is currently a $15 chance at Sportsbet.com.au to win the Group 1 Stradbroke Handicap on June 6.