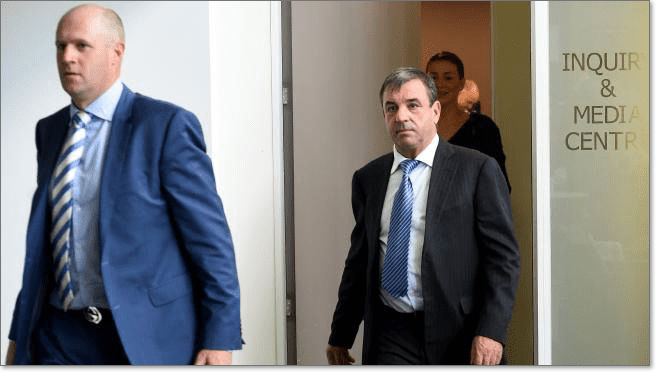 THE future of thoroughbred trainers Mark Kavanagh and Danny O’Brien are in limbo after they were handed lengthy bans in a landmark doping ruling by the Racing Appeals and Disciplinary Board on Wednesday.

The panel also suspended Tom Brennan, the veterinary doctor at the heart of the cobalt scandal.

Kavanagh was dealt a three-year sentence on a single charge regarding the horse Magicool, while O’Brien was pinned for a total of four years on a string of offences.

“In relation to each of the horses trained by him, Danny O’Brien is disqualified for a period of three years, an aggregate of 12 years,” the RAD board ruled.

“A total of four years disqualification.”

Dr. Brennan was hit hardest of the disgraced trio, copping a five-year suspension.

All three were found guilty in December last year of illegally administering horses with cobalt in an attempt to improve race performances.

Cobalt doping is the most severe drug offence in thoroughbred racing, carrying a minimum penalty of three years.

O’Brien made it clear that he and his fellow accused were unhappy with the RAD board’s decision and would take the matter the Victorian Civil and Administrative Appeals Tribunal (VCAT).

“With that case behind us, we will now go ahead to lodge an appeal,” he told the press upon emerging from the hearing at Racing Victoria headquarters.

The suspensions forbid the guilty parties from entering a racecourse and from liaising with trainers, jockeys, owners, or any other licensed racing personnel.

Thus, although the appeals process will allow them to continue working in the meantime, Brennan, Kavanagh and O’Brien will be all but finished in the racing industry if the verdict is upheld.