Gulberti Living The Dream in Darwin after Metric Mile win 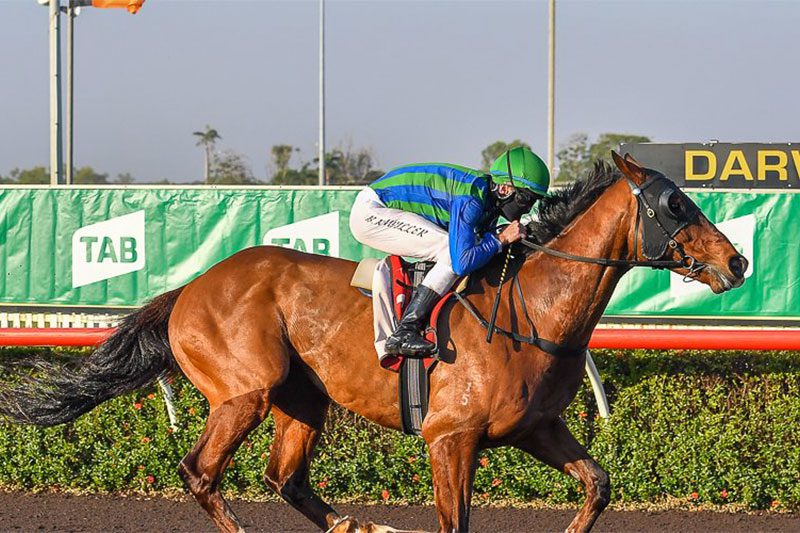 If history is any guide, then Broome trainer Robert Gulberti could be on the verge of winning the AU$200,000 Darwin Cup (2050m) for the third time.

Gulberti’s hopes of taking out the Northern Territory’s premier race on August 1 only escalated following the win by Living The Dream in the $50,000 Metric Mile (1600m) at Fannie Bay on Saturday.

It was the six-year-old stallion’s first start in nine months after finishing eighth in the Northam Cup (1600m) in Western Australia, although Living The Dream has been in work since February.

The WA trainer has returned to the Top End after winning the Darwin Cup with grey marvel Ihtsahymn in 2019 – the last time it was contested over 2000m – and in 2020 when the gelding was a 10-year-old.

Ihtsahymn only featured in the Metric Mile before lining up in the Darwin Cup, winning the event three years ago and then finishing second to Savatoxl the next year.

Living The Dream has only had 29 career starts, but before moving to the west from Victoria he had achieved wins at Moonee Valley (1600m) and Flemington (1720m) in late 2019.

Two weeks later Living The Dream finished third in the Listed Boulder Cup (2100m) at Kalgoorlie, and at his next start on October 2 he won the Kalgoorlie Cup (2200m) by three lengths.

The owners of Ihtsahymn were keen to have another Darwin Cup horse with a selection also having a share in the ownership of Living The Dream, who has a rating of 92 – the highest compared to the other 21 Cup nominations.

“In all fairness, Living The Dream isn’t Ihtsahymn – he’s got his own bat and he’s a different style of horse,” Gulberti said on Sunday.

“But to come out and do what he’s done first up is pretty impressive considering we’ve had him in work since mid February, and this is his first run in a race.”

The Metric Mile is an open handicap and is basically the last lead-up race before the Darwin Cup, and on Saturday it was the feature race on Day 5 of the 2022 Darwin Cup Carnival program.

Settling second behind the leader Starouz ($15) turning into the back straight, Living The Dream ($9.50) was travelling comfortably before $2.45 favourite Dominus (Stan Tsaikos) made his move from the back to camp outside Starouz (Jarrod Todd).

With 25-time Group 1 winner Brad Rawiller making the trip from Perth to partner Living The Dream, the Artie Schiller equine was not inconvenienced at all sitting in third place with 700m to go as the field left the back straight and negotiated the final bend.

Kaonic (Jessie Philpot), who won the Bridge Toyota Cup (1600m) for Kyneton trainer Neil Dyer on July 13, made a move on the leading three approaching the final turn as Chris Nash’s Dominus started to weaken.

Into the home straight and Living The Dream overtook Dominus before setting sail after Angela Forster’s Starouz, who had drifted towards the middle of the track when the pressure increased.

The WA galloper kept a straight course with Starouz now on his outside with 200m to go, while Tayarn Halter’s $6 hope I Am The Fox (Paul Shiers) was finishing strongly from the back along the rails.

As they crossed the winning post Living The Dream prevailed by two and a half lengths from the gallant Starouz, who finished a length ahead of I Am The Fox in second place.

Gulberti only arrived in Darwin on Monday with Living The Dream and Isola Bay, who ended up finishing second behind Flying Start in the $40,000 TROBIS 3YO 0-68 Handicap (1200m) with Rawiller in the saddle.

“We’re really happy with that, he (Living The Dream) obviously suits the track and the tempo,” he said.

“Obviously it’s done and dusted now, so we’ll just see if he’s up to them in the Cup.”

Gulberti was confident the horse would be competitive, but you get the feeling he exceeded expectations.

“Probably first up, yeah, but the race was run a little bit different than what we thought it may be run,” he said.

“We wanted to ride him positive rather than sitting back in the field and having a bad experience first up.

“Brad rode a great race on the speed and everything sort of unfolded really well.

“I was quite impressed.

“I thought before the race that he looked like we’d like him to look like prior to the Cup, so we sort of probably have to tread a bit of water now.”

Gulberti also confirmed that the horse pulled up well, adding that he expects to receive a penalty in the Cup for winning the Metric Mile despite not knowing what he will be allocated.

“We had him down at the beach this morning and he was nice and bright and happy.

“Everything is going according to plan.

“Winning yesterday, the weight would be a concern – but that’s racing.

“He’s just got to cop it sweet with what the handicappers do with him now.

“The first time we came up with Ihtsahymn the weights were already out and they gave him a penalty for winning the Metric Mile.

“But this year the weights aren’t out yet – it’s a different system this year, so I’m not too sure where we’ll end up.

Obviously, Gulberti is getting his own backyard in order when it comes to preparing Living The Dream for the Darwin Cup, but he has kept an eye on the opposition.

I Am The Fox produced a good Cup trial on Saturday, his first start since finishing second in the Alice Springs Cup (2000m) on May 1.

Starouz, Kaonic, Kym Healy’s Magnossiva, Lisa Whittle’s Desert Lass and Dick Leech’s Write Your Name ran well in the Metric Mile and may get a run in the Cup, but it seems unlikely that Dominus and Phil Cole’s Saccharo will get a start.

According to Gulberti, it is a runner from the Gary Clarke yard that stands out.

“Playoffs is probably the main one that I’m wary of,” he said.

“Without pulling at anybody else, Gary’s obviously the astute trainer up here – he dominates from year to year.

“He’ll obviously have the horse right on the day and it comes with really high credentials from Melbourne.

“It’s won at a high level – three or four nice races over distance.

“I’d be pretty confident that that was the one to beat.

“Emma Steel’s horse Gone Bye that won the other day, that was pretty impressive in the Buntine.

“There’s a couple of others there – there’s probably five or six really nice horses here.”

Playoffs looked great winning the $60,000 Chief Minister’s Cup (1600m) on July 9, and since 2002 the winner of the weight-for-age event has gone on to win the Darwin Cup eight times.

Chris Nash’s Danon Roman, second in the Cup last year, is likely to start in this year’s race, along with those who lined up on the first Monday in August last year including Noir De Rue (3rd), Kaonic (4th), I Am The Fox (8th) and Trident (11th).