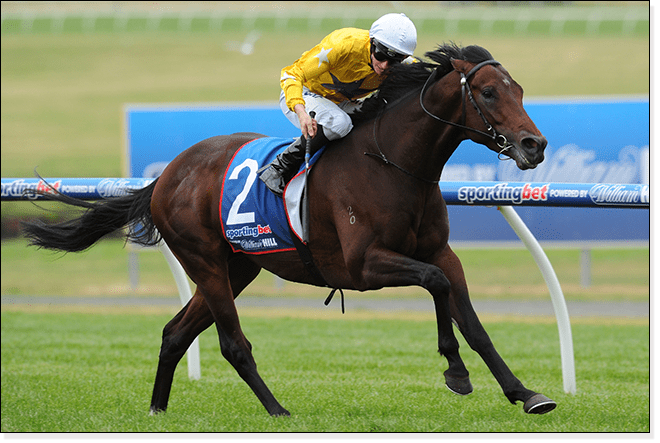 Place a win or each way bet on the George Main Stakes and Sportsbet.com.au will refund your bet if your horse finishes second or third.

THE 2015 George Main Stakes will be a key lead-in race to the spring carnivals in both Melbourne and Sydney. The $500,000 feature includes the well-favoured Cox Plate contender Kermadec, and also classy runners such as 2014 Melbourne Cup winner Protectionist and Pornichet.

Chris Waller has a three-pronged attack with Kermadec, Moriarty and the always consistent Royal Descent. 10 runners are scheduled to line up and we have all the analysis, odds and tips for the George Main and its supporting races.

The Chris Waller-trained Kermadec opened at $3 and has since firmed into $2.70 on the back of solid support. The four-year-old produced an eye-catching run behind Complacent last start and after two runs this campaign, it should be in fit order. It looks well primed to run in the Cox Plate later this spring, so expect a very nice performance here and it should go close.

Lucia Valentina flew home late behind Hooked last time out in the Group 2 Tramway and, despite never having won or placed second up, it has winning credentials in this. The Kris Lees-trained mare is on path towards the Caulfield Cup and it will only benefit from having this run. Bookmakers opened it up at $6.50 and it has since drifted out slightly to $7, but expect it to be running on strongly late.

Pornichet is a race-fit horse that can sit on the pace and kick hard in the straight. The Gai Waterhouse-trained runner has won seven from 18 and even though it faded late in the Group 2 Chelmsford last start, it will be better for that outing. It has won twice at this distance and there doesn’t appear to be much pace in the race, which will suit Pornichet perfectly. A runners chance at odds of $6.

Godolphin colt Mogador took three runs to break maiden status, but it did it in style with a 1.75-length victory at Rosehill. The Lonhro three-year-old finished second on debut behind Exosphere and it followed that up with a fourth behind Exosphere in the Group 2 Skyline Stakes. It has drawn the rail and McDonald chose Mogador over Haptic. $2.50 is available with bookmakers.

Haptic is a classy gelding which is coming off a fresh up third at Rosehill behind Japonisme. The three-year-old by Exceed And Excel is unbeaten in two starts on this track and even though it is rising in weight, it has winning credentials here. Sam Clipperton has been given the second pick, but punters are giving it a chance at odds of $4.60.

The Gary Moore-trained Takedown has a good campaign last season with three consecutive wins. It finished off by running a disappointing seventh in the Group 1 Champagne Stakes, but this is much easier and its trial form has been solid. The Stratum gelding finished fourth and second in two trials so it should be ready to fire. It opened at $6.50, but has since drifted out to $7.50.

Smart Joseph Pride-trained sprinter Terravista makes its eagerly awaited return and the punters have latched on. It opened at $3.50 and has since dropped to $2.50 after solid support throughout the week. It has won four from five fresh up and four from six at Randwick. Track conditions won’t be an issue and it has prepared nicely with two trials. Big chance.

Shiraz has transformed into a top class sprinter and it should be respected in this class. The Tony McEvoy-trained gelding has won four straight and took its overall record to 10 wins from 15 starts. This is yet another step up in grade, but it appears to have taken the next step and bookmakers are keeping it safe in the market. It opened at $5.50, dropped to $4.80 and has since settled as the second favourite at $5.

Delectation is an interesting runner which has good fresh up form. The Chris Waller-trained runner needs the pace on early as it likes to come from the back and it should get from Ball Of Muscle. It is twice a winner at Randwick and if it can keep its manners in tact, it has an outside chance of upsetting them. James McDonald rides from barrier one, so the $9 available looks like a nice each way price.

Last start Warwick Farm winner Flamboyant Lass has opened as the $4.80 favourite to win the Tea Rose. The Gai Waterhouse-trained filly scored easily by 3.25 lengths last start and its prior form came in the Group 1 Blue Diamond series. It appears to have plenty of talent, but this is a very strong field so consider for your each way bets.

Ottoman had a big boom on it after winning on debut, but it hasn’t quite lived up to expectations since. The John O’Shea-trained filly has finished second behind English in the Group 2 Reisling and it won the $580,000 Percy Sykes during The Championships, but it will need to improve on what it showed last start. McDonald had no hesitation to ride the three-year-old, so expect a nice run at odds of $5.

Perignon was an eye-catcher last start when second behind Speak Fondly in the Group 2 Furious Stakes. The Snitzel filly won five starts back at Canterbury before taking on some classy fields where it didn’t finish too far away. It won its only start second up and it looks a natural improver with Hugh Bowman in the saddle. $6.50 available after opening at $5.50.

Tip: Ottoman to win ($5) at Sportsbet.com.au

Complacent is the $3.20 favourite after winning last start where it paid $41. The John O’Shea-trained runner looked a real up-and-comer in 2013 before it suffered an injury. It finished 12th at Randwick fresh up after a two-year break, but it quickly made up for lost time with a 1.25-length win in the Group 2 Chelmsford last start. Just what to expect second up, we’re not sure, but it has class so should be considered at the price.

Stablemate Magic Hurricane is well fancied down the bottom of the page after winning impressively last start. The imported gelding won the Premier Cup at Rosehill, beating subsequent winner Silverball by a short margin. This is another rise in grade which will count significantly against it, but consider with McDonald in the saddle. The $6 with bookmakers is a touch short for us, so look for a better price.

Chance To Dance was an impressive winner at Moonee Valley last start when beating stablemate The United States by a nose. The six-year-old is another imported runner for Robert Hickmott and it will appreciate the rise in distance to 2000 metres. Its last start at Dundee was a narrow victory over the same distance, so expect a good effort here at a nice each way price of $15.