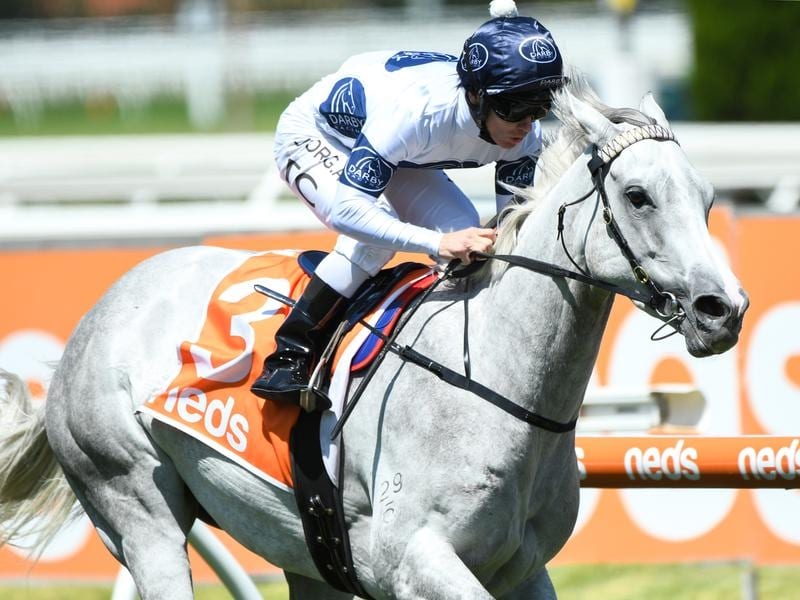 Sydney mare Greysful Glamour has started her latest campaign on a stylish note with an all-the-way win in the Group Three Mannerism Stakes at Caulfield.

Trained by Mark Newnham and ridden by Sydney jockey Tim Clark, Greysful Glamour ($9.50) delivered on a plan in Saturday’s 1400m race for mares, claiming her first stakes win with victory by a length over Bam’s On Fire.

Spanish Reef was another 1-1/4-lengths away third.

The victory was the four-year-old’s fourth from 22 starts, and first when resuming from a spell, while three of her career victories have been in Melbourne.

Clark said Greysful Glamour was at her best when she was able to lead or sit outside the leader and after getting a breather mid-race he got going again on the mare from the 600m to have her rivals chasing.

“Mark had purposely probably got her a bit more forward this preparation and targeted this race,” Clark said.

“He was saying four out of the last five leaders have won this race, so he had a plan and it was executed well.”

Greysful Glamour brought up a two-state city double for Newnham who earlier had Splintex win the Spark Of Life Handicap at Rosehill.

Greysful Glamour has two other targets in Melbourne next month, with stable foreman James Ponsonby saying the mare would head to the Group Three Matron Stakes (1600m) for mares at Flemington on March 7 before the Group Two Sunline Stakes (1600m) at The Valley 13 days later.

The mare was a six-length winner of a fillies and mares’ 2040m handicap at The Valley last spring.