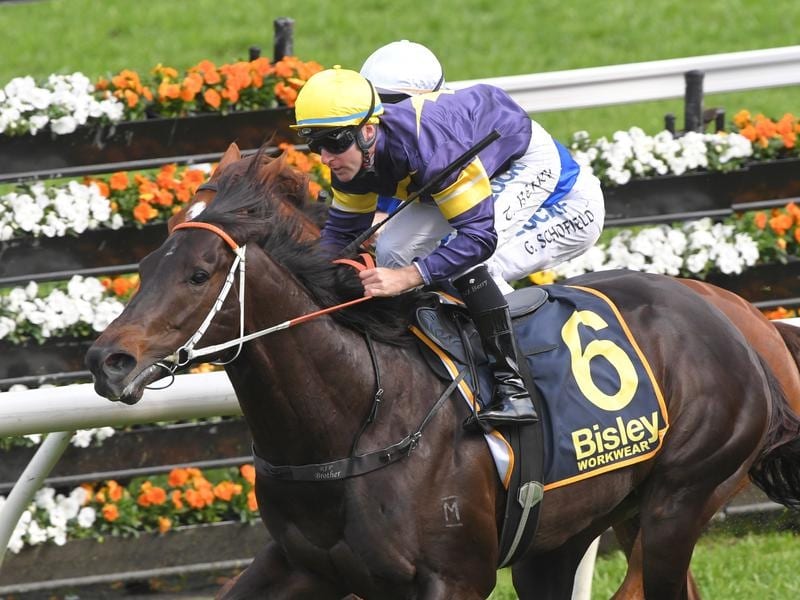 Michael Hawkes insists lightly raced star Brutal is yet to realise his potential and can soar higher in the $7.5 million Golden Eagle.

The Hawkes Racing team turned down a slot in the $14 million Everest in favour of keeping the Doncaster Mile winner fresh for Saturday’s inaugural Rosehill showpiece over 1500m.

Brutal will not have many more chances to prove himself, with next autumn shaping as his last hurrah after breeder Newgate Farm claimed a stake in the entire.

Hawkes, who trains in partnership with father John and brother Wayne, believes he can hit another level before standing at stud.

“I don’t think we’ve seen the best of him,” Hawkes said.

“When he won the Doncaster as a three-year-old, it was only his seventh start.

“Racing him on as a four-year-old was the best thing for the horse.

“I think sometimes we do go to stud too early.”

Hawkes has had Saturday’s date circled for months as the culmination of a five-week campaign, following a barrier trial and lead-up runs in the Group Two Premiere Stakes and Group Three Sydney Stakes

“We always planned to have three runs coming into this race,” he said.

“It just ticks all our boxes and obviously this is his grand final. This is what we’ve set him for all along.”

Brutal’s wide draw (17) sent punters running, with the horse drifting to $5.50 on Friday as the market migrated to Chris Waller-trained rivals Arcadia Queen ($3.20) and Kolding ($5) who slot into gates five and four respectively.

But having jumped from barrier 18 to win the Doncaster, Hawkes was optimistic jockey Tommy Berry could re-enact Glen Boss’ heroics and possibly track neighbouring Sunlight out of the gates and made light of the situation.

“History states no horse has won from inside barrier 17,” he said.

“History’s meant to be broken.

“Tommy knows the horse. He knows what he’s got underneath him. Hopefully he can get him in a nice spot.

“We’re going in confident. We can only rely on Tommy to get the job done.”

Should they fall short, the $1 million Redzel Stakes could be a reasonable consolidation prize for the Hawkes stable as $26 chance Kapajack takes on Everest runners Pierata ($2.80) and Trekking ($4.20).

“He’s not weighted to his best in Saturday’s race,” Hawkes said.

“When we looked at this race, the bonuses probably weren’t on offer to the Everest and the Sydney Stakes.

“That’s lured horses into these races.”

The winner of the Redzel Stakes collects an extra $750,000 if he or she also ran in The Everest.