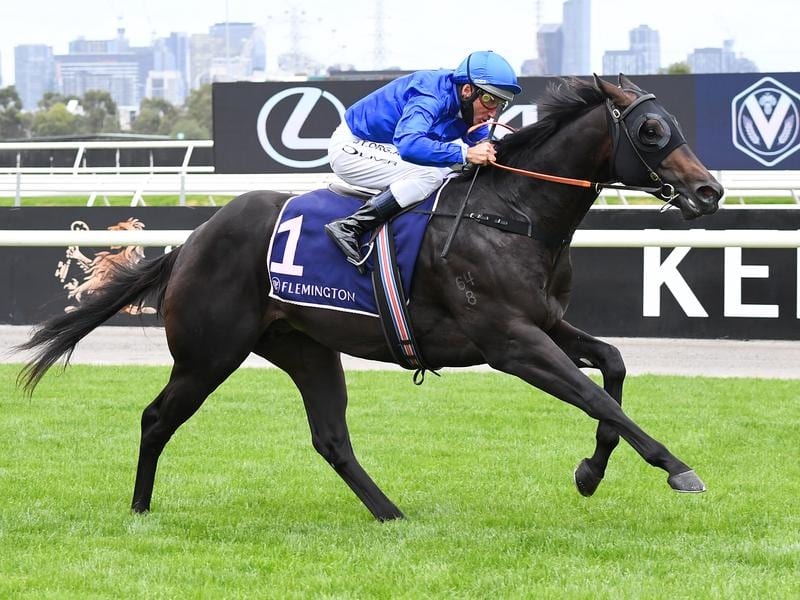 Ingratiating is likely to join James Cummings’ powerful Blue Diamond Stakes team after his authoritative win in the Talindert Stakes at Flemington.

The Godolphin trainer will already be represented by Anamoe, Arcaded, Picarones and possibly Telluride in the Group One two-year-old race at Caulfield next Saturday.

Cummings’ Melbourne stable foreman Sean Keogh said they would see how the colt pulled up before committing to a start.

However, Keogh couldn’t imagine the youngster being too affected after his comfortable win in the 1100 metre stakes race.

“He got to the front a fair bit from home and looked like he was doing it quite easily with Damien (Oliver),” Keogh said.

Keogh felt that because Ingratiating hit the front early, Oliver had to be a little harder on him than they wanted.

Ingratiating is from the first crop of Darley stallion Frosted and the Talindert Stakes victory was his second win from four starts, both his successes coming at Flemington.

Keogh said that Ingratiating was one of their most professional and precocious two-year-olds and they had always had a big opinion of him.

Oliver shared that assessment, saying Ingratiating had impressed him since the first time he rode him and added he didn’t think there was much between him and Anamoe.

The top jockey also believed the addition of blinkers for the first time suited Ingratiating.

“My only concern was that he had 59 (kilos) as a two-year-old against what looked like a reasonable race,” Oliver said.

Ingratiating ($3 fav) defeated the Peter Moody-trained pair of Gimmie Par ($11) by a half-length and Birdsville ($16), who was another two-and-a-half lengths away third.

It was an encouraging debut from the well-bred Gimmie Par, who is a half sister to two-time Group One winner Ole Kirk from the family of Black Caviar.