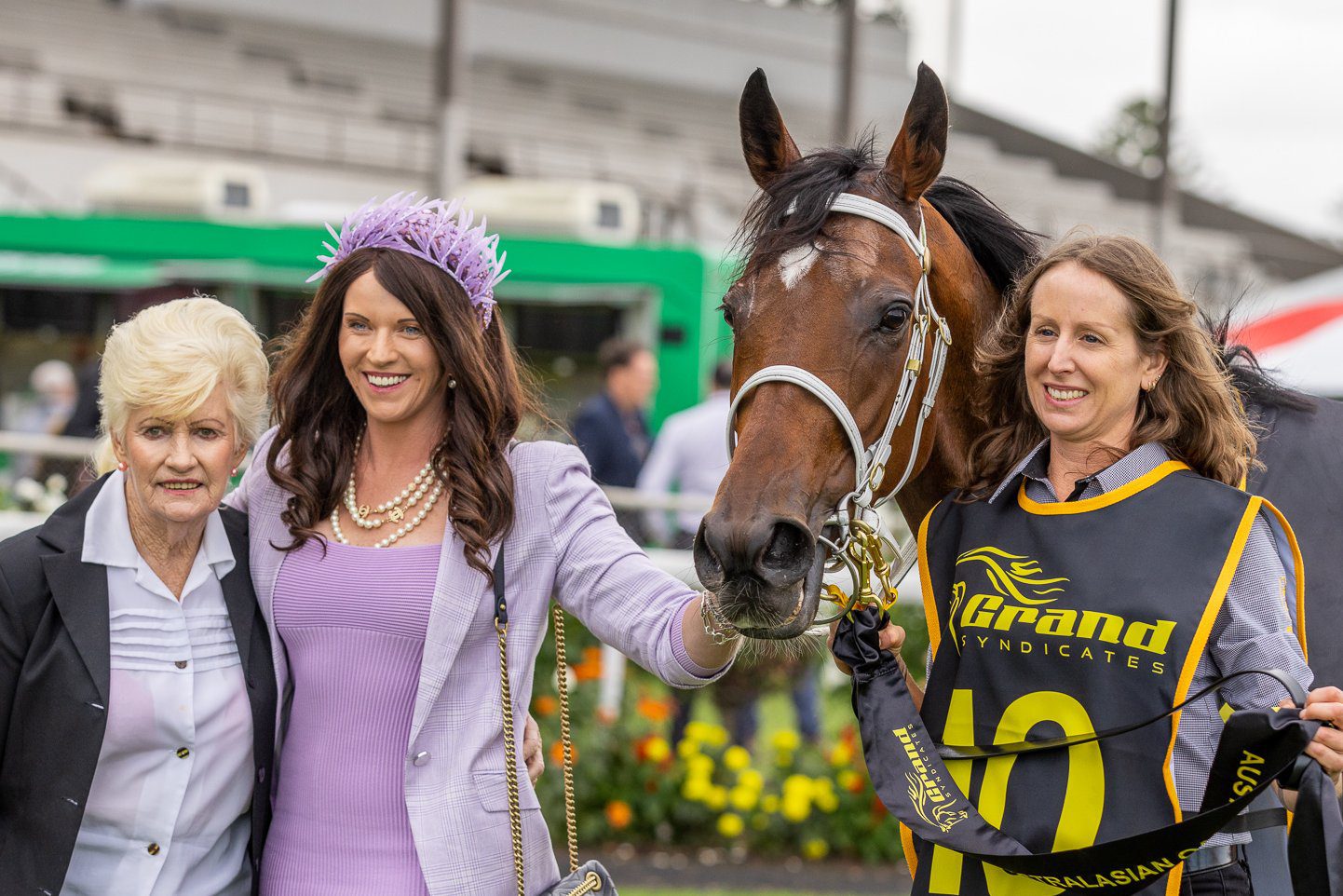 Glint Of Hope has taken out the Group 1 Australasian Oaks at Morphettville for Trent Busuttin and Natalie Young under a gun ride from Daniel Moor.

From her nine race starts, the VRC Oaks has been the only time the daughter of Deep Impact has been out of the placings, including a second in the Group 3 Ethereal Stakes and third in the Group 2 Edward Manifold Stakes during the 2021 Melbourne Spring Carnival.

Starting at $13 with online bookmakers, the three-year-old filly jumped from barrier 2 and was settled by Moor slightly better than midfield on the rail. Taking the opportunity around the final turn, Moor snuck up the fence with the Japanese bred filly bounding away to win by a head to Barb Raider ($10) who had had the sit of the race in second with Craig Williams onboard.

Jamie Kah had $2.70 favourite My Whisper fourth on the fence throughout, pulling out and running home well after racing keenly in much of the early stages to finish a close third.

“He didn’t go around a horse, he rode her an absolute treat. He just got on the back of Jamie Kah on My Whisper and those were really the only instructions. He’s been a crucial part of our team of late, so just couldn’t be happier.

“Obviously, she’s a Deep Impact, so she now has a great residual value winning a Group 1 Oaks.

“She’s a filly that can be a little bit temperamental at home, she has her moments,” admits Young.

“It’s fantastic for Mr Hosaka and the Japanese connections. They’ve entrusted us, and I guess after winning (the 2020 Group 1 Blue Diamond Stakes) with Tagaloa, they thought why not give us a Japanese bred filly. And now we’ve got another group 1 with a Japanese bred. It’s unbelievable.”

After her VRC Oaks run back in November, the Australasian Oaks was the obvious next stepping stone trying to chase that Group 1, said Young.

“It didn’t go quite to plan in the VRC Oaks, but it did today. She had a perfect ride, she travelled over brilliantly. Big thanks to the team at home, we’ve got great staff at home. You don’t get Group 1 results without having a really good team.”

“They’ve had my back for the last few months. They’ve been absolutely fantastic while I’ve had a few health issues. So, it’s just great we’re still getting Group 1’s and have that great team behind me, I love them to pieces.

‘I still have a little bit more to go through, but we’ve all got sisters or mothers and one in seven women get breast cancer, so it’s not something we shouldn’t be talking about.

“I think it’s important to keep going and keep doing those things. Me getting up in the morning and going to the stable has really helped me get through that hard time. A big thanks to my family and I’ve got my mum here today, I haven’t seen her in four years.”

Moor was pleased to get the win for the stable, who he says have always been great supporters of his,

“We had a great 12 or 18 months before I went to Hong Kong. To repay them in a race that probably means a lot to the owners as well as the stable and obviously she’s got good residual value now this filly, it’s really satisfying,” he said.

“I just wanted to follow Jamie (Kah) everywhere. I rode that horse (My Whisper) its first start and really gave me a really nice feel and it went on to be unbeaten since. So, I knew she was a horse that would drag us into the race if needed and I had to make the decision down by the turn to whip up the inside at that point.

“It was probably a bit sooner than I would have liked, but I wouldn’t have gotten out any other way. So, I had to push the button a little early, but she was strong enough to the line.”