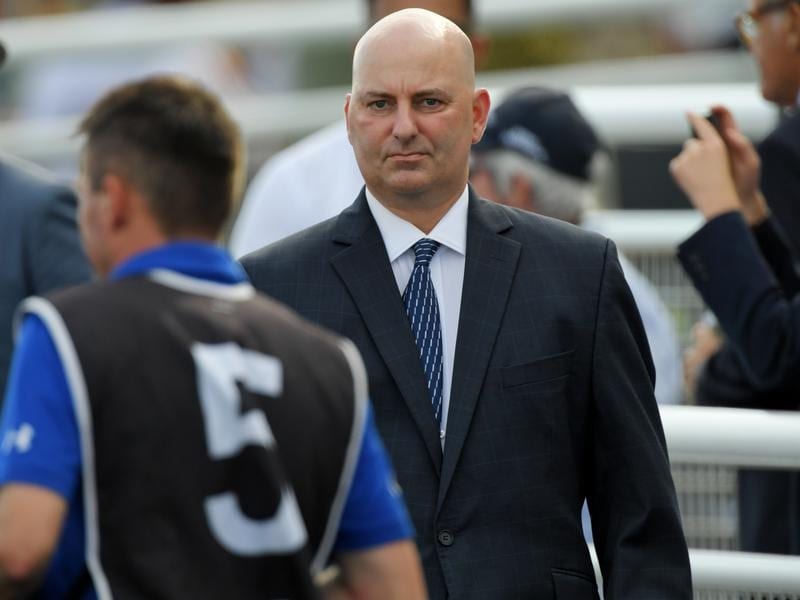 John Thompson could be forgiven for feeling like the odd man out when he saddles up Dreamforce in the Group One George Main Stakes at Randwick.

He will be up against the combined might of premier trainer Chris Waller, who has four runners, and the powerhouse Godolphin operation which provides the other two.

If Thompson is feeling any pressure he isn’t showing it, making a bold decision to take the blinkers off his seasoned campaigner.

The gelding is a Group One winner over 1500m at weight-for-age and has had success over 1600m at Randwick as a younger horse.

But he is yet to win a major over the distance at his home track, his best effort a second to Avilius in the corresponding race last year.

Thompson is hoping the gear change can produce a different result.

“I thought it’s something we should try. A couple of times he has got a bit keen with the blinkers on,” Thompson said.

“It’s a game of inches and if we can just get him to relax a bit and get a bit more out of him in the straight it will enhance his chances.”

The eight-year-old continues to be a tough campaigner, bouncing back from a first-up flop in the Winx Stakes where he had a torrid run to claim the Tramway Stakes last start.

Thompson says he has continued to thrive and is hard-fit for Saturday’s task against Waller’s quartet, led by Verry Elleegant, and the James Cummings-trained duo of Avilius and Colette.

“It was a tough run but he’s an old, seasoned horse and he’s come through it really well,” Thompson said.

“He is nice and fit now third up and I couldn’t be happier with him.

Thompson will also start Cuba in the Group Two Bill Ritchie Handicap (1400m) and feels the Listed winner has returned to work better than ever.

Traditionally a good first-up performer, Cuba has trialled well in the lead-up and Thompson expects him to again sprint well fresh despite a class rise.

“It’s strong enough and it’s a step up for him. He won a Listed last prep and this is a Group race but I just think he’s going better,” Thompson said.

“Both his trials have been great, his work has been great and he’s going really well.”