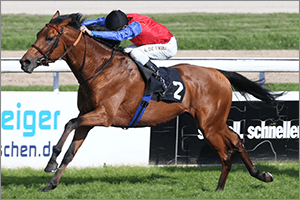 The dual German Group 1 winner had its first run last Friday at Flemington and the effort pleased Freedman.

“He just sat at the back of the field and finished under a hold,” Freedman said.

“That was as much as we wanted him to do and Damien [Oliver] was happy with him.”

Freedman said he has been mindful of taking Ivanhowe’s first Australian campaign quietly, following a gruelling travel schedule it had in Europe at the end of last year.

“He did a lot of travelling in one big go. He went from Germany to Japan and back from Japan to Germany and then to France before Australia.

“That is a lot of travelling, so it wasn’t surprising that he was a bit off-colour the first week or two he was here.”

The five-year-old’s main target is the Melbourne Cup in which it is currently paying $17 at Sportsbet.com.au.

“His preparation has gone really well considering he had a few little hiccups when he first got to us,” Freedman said.

“Things turned around and the last four or five weeks he’s been fantastic.”

Ivanhowe looked good in the coat during the trial and Freedman, who trains in partnership with his brother Anthony, has nominated it for a race in Adelaide next month,

“He may have another trial in 10 or 12 days and if he comes through that fine we’ll probably go to Adelaide for the Lee Stakes,” he said.

“It’s a set weights and penalties race over 1600 [metres] on a good track where he gets 60kg, which for a dual Group 1 winner is a pretty good weight.”

“With the spring in mind we’re just playing it by ear at the moment.”