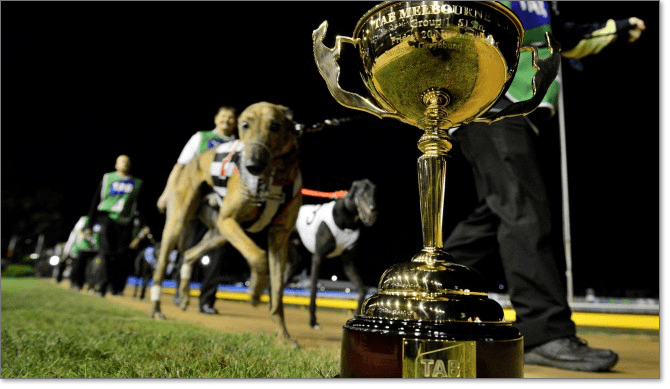 SUPERSTAR chaser Fernando Bale looks set to add to his legend as the $1.50 favourite to take out the world’s richest greyhound race.

The Andrea Dailly trained gun has won 33 of his 40 starts and snared prize money of over $1.1 million and will be hoping he can add a piece of the $600,000 on offer in Friday’s Melbourne Cup at Sandown Park in Melbourne.

Our friends at Sportsbet.com.au have posted the eight time Group 1 race winner as the $1.50 favourite for what may be his racetrack swansong.

But the bookie’s Ben Bulmer reports punters are avoiding the favourite, which has drifted from $1.40 to $1.50.

“Connections are not ruling out the possibility that this could be Fernando Bale’s last race,” Bulmer said.

“It would be great to see the champion bow out a winner, however punters are yet to come for him.”

When he jumps from box six on Friday night, it will be the 22nd consecutive time he has started odds on, a remarkable effort.

He scorched home by 7.5 lengths as a $1.10 favourite in his heat and a win in the big race would give Fernando Bale 26 victories from his past 28 starts.

He has never lost a Group 1 race.

“He’s a champion, that’s all I can say,” Dailly told sandowngreyhounds.com.au after the heat.

“I wasn’t nervous going to the boxes, but once I put him in the box I thought ‘geez I hope he wins.’

“There’s been a lot of hype about him retiring after the Cup and I really wanted to see him compete in the big race because he deserves to, he’s a champion.

“A lot of people have come to the track to see him – it’s a really nice feeling knowing how many people enjoy watching him race.

“Because we’re with him every day it’s easy to take him for granted, but when you see a crowd like tonight it reminds you just how special he is.”

When pressed on whether it would be the champ’s last start, Dailly said “that’s sort of what it’s looking like.”

“We’ll see, we might be able to talk him (owner Paul Wheler) into a few more,” she laughed.

Fernando Bale’s kennel mate, Dyna Double One ($2.80), is the only other runner under double figures.

Outsider Zipping Meg ($31) has had support and Bearville Azza, who jumps from the rails box, has admirers at $21.

“The early money has been with Zipping Meg,” Bulmer said.

“Around 30 per cent of the money Sportsbet.com.au is holding on the race is for Zipping Meg.

“There has been quite a bit of interest in Bearville Azza, with second favourite Dyna Double One also catching the eye of punters.

“Smokey Black Illusion, priced at $81, is attracting plenty of interest (from) punters who are backing it at a rate of two bets for every one on Fernando Bale.”

“It’s his chasing ability … in any race, if he gets clear run, he can win any race,” Tom Dailly said.

It’s Andrea again with third favourite Dyna Tiber, which at $15 leads the outside chances.

“I didn’t expect it (Dyna Tiber to make the final,” Andrea Dailly said.

“He showed a lot of early pace (in his heat).

“He needs to charge to the first turn like he did in his heat.”

“Her early speed (is her best asset).

“You’re not going to catch dogs from behind.”

Gun trainer Robert Britton is still chasing an elusive Melbourne Cup and he has a chance with Bearille Azza ($21).

“We gave him a go and he’s been very consistent all the way through,” Britton said.

“He’s not a great beginner, but when he does begin he can run really good sections to put him right in the race.

Britton says he will be taking it easy, with all the pressure of expectation on the Dailly camp.

“It’s great to get a finalist and this year I don’t think I’ll be getting really excited.

“I think the Daillys are the ones that have got the nerves this year, I’ll just be enjoying it.”

As mentioned, Zipping Meg is the one the punters are crowing about at the juicy $31 and trainer Jamie Ennis says she always gives her chance with her starts.

“Her box rise manners (are her best asset),” Ennis said.

“She always lands a length in front of the field, and she can break five to the first mark and that puts you up there early pretty much all the time.

Another great trier in Lamia Bale looks set to hang up the cloths and the $41 chance cannot be discounted as the only runner in the race to have recorded a win over Fernando Bale.

Trainer Heather Collins said the gun had put her kennel on the map.

“This is the only race we really wanted to compete in and she’s achieved that for us so she owes us nothing, she’s brilliant,” Collins said.

“She’s given us a lot of races we never dreamt of.

“I think she’s looking at retirement after the Melbourne Cup.

“It’s going to be a big hole in our kennel.”

The rank outsider is Black Illusion at $81 and, going on what trainer Angela Langton had to say after his heat, there’s good reason.

“I’m really thrilled to get into the final.

“He probably can’t win, but it’s very exciting to be there.

“If he can begin well, at least he puts himself in the race.”

First run in 1956 and worth £500 to the winner, ‘the Cup’ has grown to become Australian greyhound racing’s ‘Holy Grail’, attracting the fastest greyhounds in the country.

Fernando Bale from Dyna Double One and Zipping Meg

The champ is here and he’s ready to rumble. It looks like time for Fernando Bale to hang up his cloths as one of the greats. Very hard to see him losing here. The expectation is on Dailly and we expect her to deliver. The other Dailly will have his chaser primed as well. But he’s raced against Fernando Bale seven times and never beaten the champ. It’s his eighth Group 1, but he’s never won one and we think he’ll be the bridesmaid again. The punters’ pick Zipping Meg is not without her claims in this race, but the two we’ve listed ahead of her have an edge in class.

It might be a little shorter than the 600m she covered to win the Hume Cup at the Meadows earlier this month, but Secret Spell has a legitimate claim on this race. That’s Group winning racing experience and Bravo already has three of those under his belt this month alone. Led her heat all the way and will be primed for this one. It’s not often races involving Fernando Bale finish without him on the top of the podium, but this is a cracking field and, when it comes to the cup, anything can happen. Hard to see him finishing outside the top three, even in worst case scenarios. Zipping Meg got squeezed in her heat, but still made it home in 29.55. That number will be slashed if she can get a clean run.

What, Fernando Bale not in the placings? Yes, pigs might fly. Well this is greyhound racing and, when it comes to animals, they can be unpredictable and throw up some amazing results. Lamia Bale has a formidable record of her own with 12 group finals and if any dog knows this track, it’s hers. She has 14 wins at Sandown Park and 14 placings from 43 starts. It’s her home deck and she is also the only dog in the race to have defeated Fernando Bale. She’s at the end of her career, wouldn’t it be a dream result for her to go out a Melbourne Cup winner? We’ve said enough about Zipping Meg, but considering we’ve picked her in all three of our trifectas, we’d hope she can get the job done in the placings. And again, we like the honest chaser Secret Spell to get in the numbers.