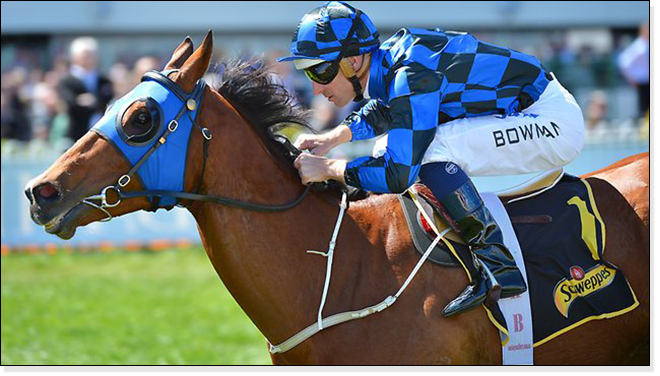 GROUP 1 racing returns this Saturday with the Winterbottom and Railway Stakes at Ascot, Perth. The $1 million features include some of Australia’s best sprinters and milers with last years Winterbottom Stakes winner Buffering returning to defend its crown.

Expect plenty of fight from the locals as the Grant Williams team looks set to take home some of the cash. Top class mare Delicacy is the favourite for the Railway Stakes despite tarnishing its picket fence formline last start, with punters confident ahead of this Saturday’s feature.

Nine races on the card at Ascot which kicks off with the Peace For Paris Handicap where local runner Lunar Eclipse looks a handy winning chance.

Sign-up with Crownbet and claim up to $1,000 in bonus bets to place on the Railway Stakes.

Lunar Eclipse is a Daniel Morton-trained gelding which is dropping back in grade after finishing second at Ascot last start. The well-bred son of Choisir gets Craig Williams in the saddle which will help and it runs best on this track with a win and a placing from four starts. Should go well and its weight of 55.5kg makes it tough to beat.

Lord Conrad has had two runs this campaign to prepare for this and won came in behind Perfect Reflection at Ascot. The three-year-old has won two from 14 with four placings and it should be well supported for this run. The son of Saxon has drawn well in barrier four and it drops down to 54kg for this. Looks a handy each way chance at odds.

The David Harrison-trained Flytego last ran second behind Lucky Street and that is contesting the Winterbottom later in the day. The six-win gelding has plenty of experience with three wins coming on this track, but it has been punished in the weights. Jockey Aaron Mitchell takes 2kg off its back, bringing its weight down to 60kg which makes it tough, but it has the class.

The Colin Webster-trained Liberty Rise drops in weight even though it won in rating 68 grade last start. The four-year-old mare has won four from 15 with three placings and three have come at Ascot. It won by 1.25 lengths two starts back in rating 72 grade which bodes well for this and it should get everything go its way from barrier five. Looks very well placed in this.

Tarquinn Shadow was a last start winner at Ascot and its only poor effort came in the Listed Belmont Guineas where it finished last of 16 runners. Luck Warwick takes the ride who is riding in great form lately and despite drawing wide in barrier 11, it should have a solid chance of winning. It has won second up so that won’t be an issue and it only needs early luck to feature in this.

Palace Intruder is a three-win gelding which is a little out of form, but it is classy at best. The Trevor Andrews-trained runner contested listed grades last campaign where it finished fifth behind Battle Hero on two occasions. That form should stack up well for this grade so keep an eye on the market for any significant betting moves.

Sheidel was no match for Rock Magic in the Group 3 Colonel Reeves last start, but it has an impressive record of eight wins from 12 starts and six from seven at Ascot. Prior to its spell earlier this year, it defeated the talented Wink And A Nod and Rebel King when winning at Ascot. It looks a very strong winning chance in this and it could get back to its winning ways.

Ideal Image is a classy mare for trainer Adam Durrant which was a last start winner at Belmont. The four-year-old mare finished 3.5 lengths behind Sheidel three starts back, but it has since finished fifth in the Listed W.A Breeders behind Belle La Vie and won a lower graded race last start. It had a trial to prepare for this and looms as a major upset chance.

Vampi Lass was extremely disappointing when finishing last at Belmont in July, but it has since been spelled and finished third in a recent trial. The five-year-old was good enough to win the Group 3 La Trice two back at Ascot when beating Real Charm by half-a-length. It has exposed form in some tough races so consider in this at good place money.

Fashion Princess goes best second up with five starts for two wins and two placings. The Adam Durrant-trained mare finished three lengths behind Lucky Street last start which should be a good form line and it drops nicely down in weight for this to 53kg. It rarely finishes down the track, but it does mix form so it makes it hard to back at times. Joseph Azzopardi rides and he’s riding well at the moment so consider in this.

Global Flirt didn’t fire fresh up when finishing last in the Lee Steere Stakes behind Black Heart Bart, but it should find this much easier and it has form in strong listed races. The Justin Warwick-trained gelding is a nine-year-old which is concerning and the distance doesn’t suit, but it will be at a nice price and it could provide some each way value at odds.

Dream Lifter put two wins together earlier this year and it was only three lengths behind Lucky Street last start. The six-year-old has won six from 15 starts with two coming on this track. It usually races with big weights, but dropping to 55kg is a big assist and the experienced Patrick Carbery rides. Chance in a tough field.

Grant Williams lines up the unbeaten Celebrity Dream which is extremely well bred. The three-year-old by Thorn Park x Our Valpolicella has won two from two and Williams Pike is very excited to ride this filly. This is a big step up from its last start, but it stays at a winnable weight of 54kg and it should be very well backed at short odds.

Remember Berlin finished second behind Celebrity Dream on debut, but it has since won at Ascot and that experience will benefit the gelding. The Simon Miller-trained three-year-old is bred to appreciate more ground and it has always been respected by punters. It was the $1.75 favourite on debut and the $1.80 favourite when it won last start. That bodes well for this and it could test the favourite here.

Senso has disappointed in its last two starts at Ascot, but it looked impressive earlier this season and it’s a chance if it can return to its best. The Paul Jordan-trained gelding has drawn wide in barrier 12 which is of concern and it faces a tough field, but it could provide some handy place value for multiples players.

He’s Our Rokki comes over from Melbourne for the Hayes/Dabernig team with good form in top races. The former New Zealand runner finished fourth in the Group 3 Carbine Club Stakes last start and the winner, Mahuta, has since franked that form with another win at Sandown. This distance suits again and bookmakers have kept it safe in the market at $5.50. Looks a solid chance at those odds.

Arcadia Dream is the current $3.80 favourite after finishing second in the W.A Champion Stakes behind Perfect Reflection. The Grant Williams-trained filly hasn’t finished worse than third in five career starts and it has placed in all three starts on this track. It hasn’t yet won at Ascot, but it has been taking on tough fields here and this looks winnable for it. Drawn very wide in barrier 15, but Pike is the best of the west and he could provide a gem.

Showy Chloe should be respected after winning three starts back in the W.A Sires. The Jason Pateman-trained filly won by 4.75 lengths and it has since finished close up behind some talented horses at listed level. It has drawn well in barrier five with a light weight of 54.5kg. Is well respected in the market at $5 and it will be tough to beat.

The Robert Heathcote-trained Buffering returns to defend its title after winning this great race last year. The multiple Group 1-winning gelding wasn’t disgraced when finishing fourth in the Darley Classic at Flemington and it won a Group 1 only three starts back at Moonee Valley. It has now won 17 from 49 starts and we’re expecting it to go forward and show its never say die attitude. Big chance at $4.

Lucky Street should be included on Perth form alone. The Trevor Andrews-trained colt is giving away experience to most of these, but it won very easily last start and that form should stack up well for this. It has won five from seven on this track and is unbeaten in two at this distance. The weight of only 53.5kg makes it a tough proposition so include in your win bets.

Fast ‘n’ Rocking is well suited to Perth racing and it was last seen running on late in behind Chautauqua in the Group 1 Manikato Stakes. The Hayes/Dabernig-trained gelding has won only five from 33 races, but it has always promised plenty and winning this isn’t beyond its reach. It has been well fancied with bookmakers at $6 after opening at $7 and that support should be noted.

Tip: Buffering to win ($4) at Sportsbet.com.au

Black Heart Bart is one of the finest WA gallopers around and it couldn’t have started this campaign any better. The Vaughn Sigley-trained gelding has rattled off three consecutive wins with the latest coming in the Group 2 Lee Steere Stakes at Ascot. The five-year-old took its career tally to 10 wins from 23 starts and it looks a tough prospect in this. It opened at $4.80 and has drifted slightly to $5, but expect a very good effort.

Delicacy looks the class runner of the field with a stellar campaign last season. The Grant Williams-trained mare won the W.A Oaks, W.A.T.C Derby, Schweppes Oaks and the SA Derby. It beat some very talented horses in doing so and even though it’s probably better suited over longer distances than the mile, it ran on nicely last start over 1400 metres and it could be the next big time to come out of Perth. William Pike chose to ride this mare and it’s not hard to see why. Deserved favoured at $4.20.

The Chris Waller-trained Good Project was scratched from Sandown last week for this and Waller knows how to prepare his horses for big targets. The four-year-old finished second last start at Flemington and whilst it has never faced this quality of opposition, it looks a real horse on the rise. Dropping from 60kg to 53kg makes it a winning chance and Craig Williams is the ideal jockey to have on board. Respected in the market at $7 after opening at $7.50.

William Pike rides Mystic Prince which ran very well for second last start in the Listed Kalgoorlie Cup. The Adam Durrant-trained gelding has won seven from 23 starts with one win coming on this track. This looks a fairly even field and even though it has to lump around 58.5kg, it looks well placed against some of these lesser graded runners.

Dubai Escapade went well last start when seventh in the Kalgoorlie Cup and that should be the main form guide for this race. The six-year-old will get all favours from the inside draw with Lucy Warwick in the saddle and it looks well weighted for this. Has been up for awhile now which will make it in fit order and it could be hard to run down.

Drive West is a last start winner in the Ascot Gold Cup when beating race-rival Young Lionel by 1.5 lengths and it has the experience needed to win this race. It was won four times on this track from 26 starts and it has raced twice since the Kalgoorlie Cup whereas the other runners haven’t. It could provide some value into calculations here.