Free betting tips and bookie bonuses for the Queensland Derby 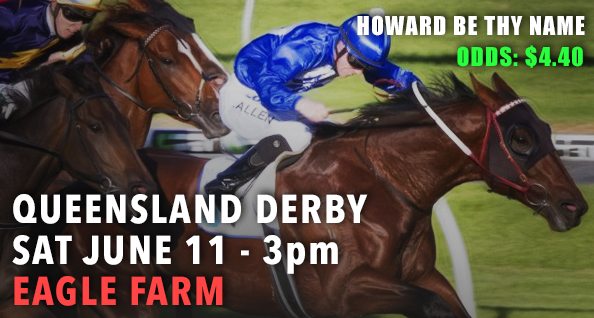 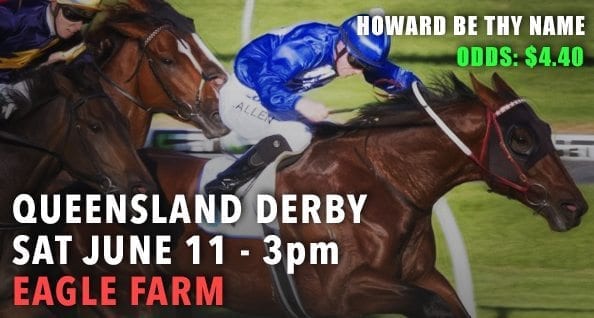 THE Queensland Derby features a full field of 18 runners and it looks to be an evenly-contested race this year. The group 1 is worth $600,000 and is run over the staying distance of 2400m which separates the men from the boys.

It has been a three-way war in the betting throughout the week. Howard Be Thy Name, Mackintosh and Eagle Way have split punters, but there are plenty of good betting opportunities in the race and we have supplied a betting guide to give punters the best chance of making some money in the Derby.

The race is scheduled for 3pm on Saturday and if you take a bet in the first four races at Eagle Farm, WilliamHill.com.au has a special for you. If your runner is beaten, but finishes in the first half of the field, you will get your money back (up to $25).

This Darren Weir-trained colt has looked like a potential top-liner this season. The Redoute’s Choice three-year-old won four consecutive races which included the South Australian Derby over 2500m at Morphettville. It then travelled to Queensland and ran a good race for third behind race-rival Mackintosh and it will be better for that run.

It has drawn well in barrier two and won’t have to spend a penny in the run. Its price has drifted from $4, but it should be well-supported on the day and the $4.40 looks nice at Sportsbet.

The John O’Shea-trained stayer might be better suited over two miles, but punters should respect its last two placings behind Cool Chap and Howard Be Thy Name. It finished only a half-length behind Howard Be Thy Name in the South Australian Derby and take nothing away from that run.

It is guaranteed to see out the distance and it’s only the win strike rate which has turned punters off. It has won only once from 12 starts and its inability to cross the line first has cost punters dearly. James McDonald has taken the ride over the stablemate which is a good sign. $10 chance after opening at $8.

The former New Zealand runner has come of age with three consecutive wins in Australia and it has dominated the key lead-up races for the Derby. The son of Pins won the Rough Habit Plate by 2.8 lengths and then the Grand Prix Stakes narrowly over Eagle Way and Howard Be Thy Name.

It likes to dictate the pace in front and if it gets a soft lead, it will likely win the race. Opposing jockeys would be silly to let it get its own way, so it will likely tested in front. Punters enjoy backing on-pace runners as they always give you a sight, so we expect Mackintosh to be well supported at $4.60 with Sportsbet.com.au.

Cylinder Beach was one of the favoured horses for the Derby prior to its disappointment in the Grand Prix. The Desleigh Forster-trained gelding has raced as short as $1.14 this season when winning its maiden at Doomben and the support has stayed steady throughout. The support isn’t there for this run, however, as punters can get $26 for the win.

It would need to bounce back well to take this out.

Stablemate to Cylinder Beach, I’m Belucci ran on well in the Grand Prix, but it hasn’t done much this season to entice punters. Its best performance was a second placing behind Emphasis in a handicap race at Doomben and that form won’t stand up here.

It has been a long-shot runner in its last two starts and we’re surprised punters aren’t getting a better price than $21. Should be paying around $41 at least.

Chris Waller-trained runner which opened at $7, but has drifted steadily in the betting. It was an impressive winner at Rosehill last start when beating the talented Chandana by four lengths, but the month between runs could hurt it.

It should appreciate the distance and Adaline was a handy mare in New Zealand, so the breeding is there. The betting drift is always concerning, but Hugh Bowman riding is a positive and Waller rarely gets his tactics wrong.

The three-year-old by More Than Ready flashed home in the Grand Prix and it has consistently improved over longer distances. The Bryan Guy-trained gelding ran on late in the Gunsynd Classic at Doomben and again in the Rough Habit Plate. Its run last start was indicative of an improving horse and it should be tough to beat.

Eagle Way opened at $4.60 and has drifted out slightly, but it’s nothing too drastic and it will start as one of the top three betting chances.

This son of High Chaparral has done nothing wrong all preparation and the only thing punters are worried about is the rise in class. The well-bred gelding was a tough winner at Randwick last start and it’s now having its ninth run for this.

It opened much shorter at $17 and has drifted out to $26, but Joao Moreira takes the ride which is a key aspect and it could be one to watch next season. This might have come a tad too soon for it, so we’re prepared to risk it at that price.

Has little going for it after 14 win-less runs. Battled home fairly in the Grand Prix and Oliver takes the ride, but its form isn’t overly inspiring and it doesn’t look to have the turn-of-foot that will likely be required to win the Derby.

It opened far too short at $26 and has subsequently been let go by bookmakers to $51 which is a fair price.

Another Chris Waller-trained runner which looked good in Sydney earlier in the season, but hasn’t coped with the going in Queensland. It finished last in the Grand Prix Stakes and its effort prior in the Rough Habit wasn’t any better.

It has fluctuated in the market throughout the week, getting out to $41, but support has come for it and it now settles at $26. We can’t see it winning this and expect its price to blow out.

David Vandyke lines up the Hinchinbrook gelding which ran well for fifth in the Grand Prix and that race is the key form guide for this. It paid $12 on that occasion and doesn’t deserve to be paying over double that for the Derby.

The further rise in distance is the concern for punters and the breeding doesn’t suggest it will suit, but consider at a big price. The $7.50 to place at Crownbet isn’t the worst saver bet in the world.

Has been very confidently backed throughout the week. It opened at $10 and is currently at $7.50 which suggests the stable is expecting a top effort. The Godolphin gelding didn’t have much room to move when finishing fourth in the Grand Prix, but it was still two lengths behind Mackintosh.

It will need to improve to take this out, but it’s expected to and it will get a soft run from barrier three. If the current price continues to drop it will pay to take notice. A first four chance in our eyes.

Form has been in much lower-graded races at Wyong and Gosford. Colt by Fastnet Rock which will be unsuited by the distance and the $61 is way too short. This runner should be paying triple figures from barrier 15 and we’re giving it no chance of winning.

Won well at the Gold Coast two starts back before boxing on well behind Col ‘n’ Lil last start, but this is a massive rise in class. The rise in distance looks suitable, but the odds suggest it won’t be featuring in the finish and the connections should be happy with a top 10 run.

Twice a winner from nine starts and it gets the inside draw, but that’s where the good news stops. Its form simply doesn’t measure up to this level and the $101 win quote looks about right. At least punters are getting value for their money.

Opened at $41, but that price didn’t last long. Has since drifted out to $81 after flying home for fourth behind Rodrico at Randwick last start. It will have no problem seeing out the distance and if there was ever going to be a blow out, we think Star Zone could deliver it.

We think it will be outclassed in the Derby, but throwing a sneaky bet at $81 with Sportsbet could land a big return.

Must respect anything trained by Ciaron Maher in Queensland. Has been specked at odds in this and despite running poorly in the Grand Prix Stakes, its form prior was good at the lower levels. It shouldn’t play any part in the finish and the barrier draw won’t help.

Gets in via the scratching of Colonel Custer. Has no form to speak of and it’s paying $301 for a reason. No chance of winning.