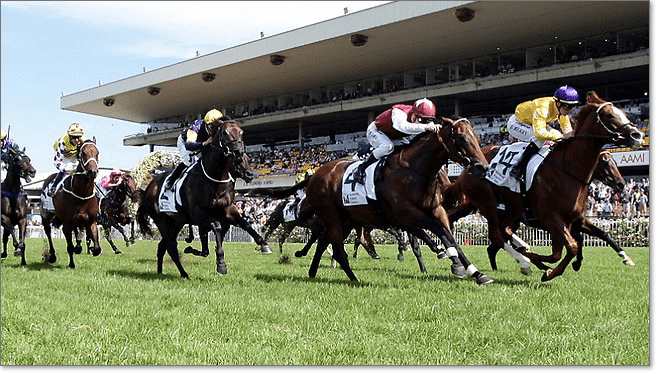 THERE are no major races at Rosehill this Saturday, but it should be a good day’s racing with some nice thoroughbreds in action.

Rosehill Gardens hosts a nine-race card including the Highway Handicap and the Schweppes 2YO which features two high-profile Magic Millions runners and the current favourite Souchez which has taken a wealth of money in the early betting.

Punters that like betting on favourites should have a field day on Saturday and there is no better time to sign up to CrownBet.com.au and get a little extra money to spend on Christmas this year.

Race 1 kicks off the day in style at 2.40pm and it’s currently a three-horse war between some valuable two-year-olds.

The John O’Shea-trained Souchez opened at $3.80 and has been backed positively into $3. The well-bred Lonhro colt finished second in a trial on November 30 and with the amount of money that has come in this week, it looks a strong winning chance. Jockey Sam Clipperton gets the premium ride with James McDonald out and he could capitalise on this opportunity. When Godolphin runners are backed this hard, it pays to follow the money.

Faraway Town was an impressive winner at Rosehill last start where the track was very wet. It looked beaten on the turn, but fought very nicely and produced a late sprint to win by a nose. The speedy Not a Single Doubt filly gets the inside draw and better conditions for this, so consider here with the in-form Jason Collett riding at odds of $6.

Peter and Paul Snowden are fresh up after training both Wyong Magic Millions winners and they line up Mooshakissa in this. The two-year-old filly by Duporth was third on debut at Warwick Farm before beaten a handy field by three lengths last start. It looked a filly with a decent future ahead of it, but after opening at $3 it has drifted out slightly to $3.20. Another strong winning chance in a tough race.

Got The Boss is a professional gelding which has a great record of eight wins from 14 starts. The Trevor McIlrick-trained runner has won the majority of its races at provincial level and after three poor efforts in town, it looked well out of its grade. To its credit, it won last start at Rosehill as an $11 chance and that has given punters plenty of confidence to reload. Opened at $3.80 and currently sits at $4.

Zin Zan Eddie has been well backed all week after two close-up performances of late. The Matthew Smith-trained gelding doesn’t win often and that can frustrate punters, but it goes best at this distance and it is definitely due a win. Has yet to win in eight attempts at Rosehill which is concerning, but it has placed on four of those occasions and this field doesn’t have much depth. Punters can snap up $3 which might drop closer to race time.

The other favoured runner is Slate On Edge which will get a valuable 1.5kg claim from Winona Costin. The consistent grey has won 10 from 33 starts with 11 placings and it was only narrowly run down in a higher-graded race last start. Its poor effort prior came at group 3 level so that can be forgiven and this is a much easier field. A solid each way chance at $5.50.

Ocean Grand had no luck in its last two attempts at the Highway Handicap and it deserves some respect in this. The Cliff Bashford-trained gelding was a maiden winner at Canterbury three starts back and it was blocked for a run two starts ago on this track and was caught wide when running a gallant fourth last start at Randwick. It opened at $6.50 and has drifted to $7.

Greg Bennett lines up the current $2.10 favourite Clearly Innocent which also had no luck in a similar race last start. The well-bred Not a Single Doubt gelding settled well back and had no luck in the straight, but it won its first two career starts prior. Those came by a combined winning margin of 3.75 lengths and the inside draw with Brenton Avdulla in the saddle makes it very tough to beat.

Bowie’s Babe was a classy last start winner by two lengths and even though this is much harder, it deserves some attention at the weights. The three-year-old filly carries only 53kg with Tim Clark in the saddle and despite drawing wide in barrier 11, it has an each way chance at odds of $8.50.

The Chris Waller-trained Cauthen’s Power pulled up with a vet problem last start which is why it failed miserably. The four-year-old has won its previous two starts, but failed to impress when seventh last start. There were obvious excuses and it’s a chance here if punters can forgive that effort. The stats read well, but $2.70 looks a touch short for a horse under the microscope.

Mary Lou resumed this campaign with a ninth at Randwick, but it has since run two very nice races behind Cauthen’s Power and Caped Crusader. The Anthony Cummings-trained mare put in the late bounds to finish second last start and even though it rises slightly in weight, it looks well suited to this level. It opened at $3.70 and has stayed steady at that price all week.

Final Decision is an enigmatic type which has won and placed on this track and it was running on well behind Caped Crusader last start also. Its best performances come at this distance and if they go fast up front, it could sling shot them late. Has plenty of support at $5 in the market.

Spatsizi is a three-year-old which has won two from five and it wasn’t far behind them at Warwick Farm last start. The Chris Waller-trained colt rises back up in distance for this which will suit nicely and from the inside draw it will get all favours in transit. Looks a moderate chance at $6.50 after opening at $6.

Chandana couldn’t have been more impressive last start when winning by 3.5 lengths at Warwick Farm. The stablemate of Spatsizi is well bred by High Chaparral and they have been winning all over the country this year. It has drawn wide in barrier 11, but expect it to drop back and make its run around the final turn. Expected a short price, but the $2.80 available looks like good value.

Baggio is a lightly-tried colt for Gerald Ryan which has improved significantly to win its last two races. The son of Stryker won its most recent effort by 6.75 lengths and that indicated it has plenty of ability. It’s much harder going from Goulburn to Rosehill, but it looks a genuine chance at this level. Has stayed steady in the betting at $5.

Fitou was a gallant winner last time out at Randwick when holding off La Speciale. The John O’Shea-trained mare didn’t have much go its way during the run, but was able to pick them up and fight back after being headed in the straight. Inside draw makes it tough to beat and punters have respected it in the market at $3.30.

I Am Zelady is a last start winner for Joe Pride which defeated Slots by 1.25 lengths and that runner has performed well since. It does rise in weight after that win, but it goes well on this track and the conditions suit be right up its alley. Look for it to push forward and be tough to run down. Opened at $3.50 and has stayed at that price throughout the fluctuations.

Elle Lou has been one of the best backed runners in the field. The Hawkes-trained mare opened at $7.50 and is currently at $6.50 following a last start fourth where it was very unlucky in behind I Am Zelady. Its form prior included placings behind Berry Delicious and Alegria, so the form is there and it has placed second up. Looks a good each way chance in this.

Make A Mark is unbeaten from two starts and it has placed in two trials to prepare for this. The Hawkes-trained gelding won by half-a-length on debut before winning easily by 2.25 lengths at Warwick Farm last start. The four-year-old is by Zabeel and any increase in distance should suit. This looks an ideal target to resume in and the $3.60 looks about right.

Wudang Mountain has been up for awhile now, but it should find this much easier than recent outings. The Chris Waller-trained colt finished off well behind Bachman last start and it was able to finish second in the Listed Dulcify Stakes behind Ambience at Randwick. That’s great form for this and it has won twice at this distance from four starts. Should prove its worth at $4.60 in the betting.

Raijinz is coming off a last start second placing behind Paceman even though it’s up in grade, it should get a chance at them here. The five-year-old has won three from 13 and after two runs in this campaign, it should be in fit order for this. Chance at each way odds of $8.50 and looms as a trifecta hope.

Sebrina was a quality winner two back for trainer Bjorn Baker, but it didn’t show much last start. The smaller-framed mare does tend to mix its form which makes it a winning chance here and it won its only start at this distance. The rise back up in distance should help and punters can get $7 with bookmakers.

Rustic Melody has come in from $7 to $6.50 after running 3.5 lengths behind Caped Crusader last start and it should improve having had three runs this campaign. The four-year-old mare by Snitzel is more bred for speed, but it placed in its only run at this distance and it has been running on solidly. Looks a winning chance at a nice each way price.

Gerald Ryan lines up Thermogenic which finished off very nicely last start and it has group 1 experience. The Northern Meteor horse ran ninth in the Group 1 Queensland Derby as an $18 chance and it’s now getting up to a more favourable distance. Has been well liked in the betting all week at $5 and it could be the underrated runner at Rosehill this Saturday.

Start Wondering is a former New Zealand runner which won its only start in Australia and it has been very well backed for this. The Chris Waller-trained gelding opened at $5 and currently stands at $3.40 after some heavy support throughout the week. It has won five from nine, its only start on this track and it should go close to taking this out.

Paceman returned to form with a win at Canterbury last start and it gets in well on the weights. The Joe Pride-trained sprinter had been taking on tough company in recent starts, but was finding it too tough. This level of racing looks more its go and dropping from 58.5kg to 53kg is a massive bonus. It has been well supported to beat the favourite at $4.40.

Turbulent Jet is at a value price of $15 after running a handy second placing last start. The Lee Curtis-trained gelding finished a nose behind Got The Goss and its form prior included a sixth behind Winx in the Group 2 Theo Marks. That’s great form for this and even though it’s paying a big price, it could fill a placing at least in this.