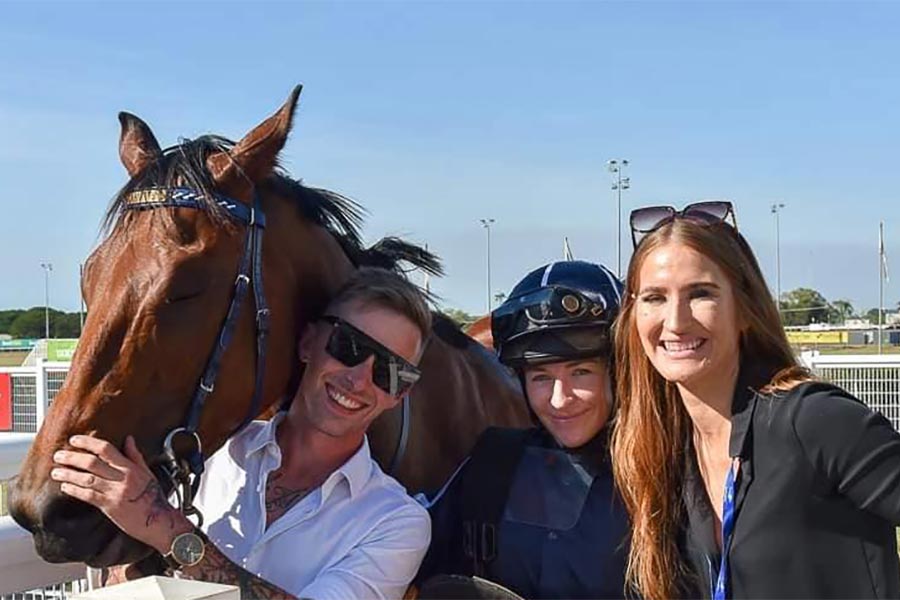 The Chloe Baxter-trained First Crusade was emphatic en route to a comprehensive win in the Hygain 0-64 Handicap (1200m) at Darwin’s Fannie Bay on Saturday.

The four-year-old gelding, who started his career in south-east Queensland and in far north NSW, was returning from a four-month spell before sealing victory by seven and a half lengths.

Among a host of quality three-year-olds to feature during the 2022 Darwin Cup Carnival, First Crusade made it four wins from seven starts in the Top End and the future looks promising.

Baxter, with just three horses in her stable, is new to the Darwin training ranks and purchased First Crusade in February after the son of Nicconi had posted just one win from seven starts.

That win was in a Lismore maiden, but since relocating to the NT he has thrived.

Garry Lefoe Jnr started training the horse for Baxter with First Crusade winning his first two races at Fannie Bay over 1100m (0-58) in April before a narrow second to John Peacock’s Super Famous in a benchmark handicap for the three-year-olds over 1100m in May.

Baxter then took over after acquiring her owner-trainer license – she is currently in the process of completing her Certificate IV studies to become a qualified trainer.

First Crusade had a month off and trailed Peacock’s Star Of Monsoon in third place over 1100m (0-62) in late June before mixing it with the top three-year-old sprinters in July during the Darwin Cup Carnival.

After turning the tables on Super Famous with victory over 1100m (BM66), First Crusade was fourth behind Greg Connor’s Flying Start, Rob Gulberti’s Isola Bay and Super Famous in the A$40,000 Samsung Three-Year-Old Benchmark 68 Handicap (1200m).

Those horses to fill the placings that day are class acts – Flying Start was named Alice Springs’ Horse of the Year for 2022.

Therefore, First Crusade’s win as the +110 favourite on Saturday came as no surprise.

First Crusade won his first race in the Top End by almost two lengths, but in his other three wins he brained the opposition by 4.5 lengths and 4.8 lengths before his latest victory where he also lumped 60.5kg.

“I’ve always had a very high opinion of him – he’s a very exciting horse to have in the stable,” Baxter said.

“He’s always been a Carnival hope and won that nice race over Carnival last season, so he’ll definitely be saved for the Carnival again.

“He was certainly in very nice company in July, so I had a high opinion of him just running around with those three-year-olds and they’ve all come out and done plenty since then as well.

“Hopefully, we can target some bigger races this time around with him, which looks like he should suit.”

Paul Shiers was the rider for his first two wins, while Casey Hunter has been the pilot for his past two wins.

Baxter, 30, now boasts four wins from 10 starts as a trainer – her other horse is Swing With Junior – and was pleased with First Crusade’s win on Saturday.

“I was very confident with him going into it and I thought he’d run a nice race for us, but I certainly didn’t expect him to win by how easily he did,” she said.

“I thought there would be a bit more early speed.

“He can just bounce to the front nicely or he can sit off them, so it was just sort of wait and see what everyone else did.

“Once he got to the front he settled – Casey made the call in the run, but she rode him beautifully.”

Jumping from the inside gate in the six-horse field, Flying Crusade did miss the kick before gaining rhythm and speed very quickly to settle in front passing the 1000m.

“Yeah, he did jump a bit slow out which he can do,” Baxter said.

“Sometimes you just have to wait and see how he gets out of the gates.

“He caught up easily and then once he was in front he was certainly happy to stay there.

“It’s nice when he wants to do it that way.”

Meanwhile, four-year-old gelding To The Point (Casey Hunter), who has also won twice for Baxter, made his fourth appearance for the stable on Saturday and finished third in the bet365 Class 2 TROBIS Handicap (1200m).

Missing the start, To The Point settled at the rear and avoided trouble when there was early interference after 150m before joining three other horses in pursuit of the Phil Cole-trained Tsugaru (Vanessa Arnott) once leaving the back straight.

Turning for home Chris Pollard’s Cudjerie (Stan Tsaikos), who had won two straight before a last-start fourth, set sail after Tsugaru as the other five runners battled it out for third place.

Cudjerie missed catching Tsugaru by a head, but was awarded the race after Tsaikos lodged a protest following that incident in the back straight that ended the hopes of Tom Logan’s fellow equal favourite Malibu Edition (Sonja Wiseman).

“To The Point still ran and hit the line really nicely – I was really happy with his run, actually,” Baxter said.

“He was very lucky to stay out of trouble.

“Casey did very well to get all around it, so I don’t think it bothered him too much.

“He got bumped around a little bit in the run, but he’s pulled up well – he’s a really fit horse.

“I just think he is searching for 1300m and hopefully stepping over a mile at some stage as well.

“As for First Crusade, I’m looking, there’s a fair bit for him.

“I’ve just got to map it all out exactly what we want to do.